The Stags travel to Goodison Park tomorrow night for a Papa John's Trophy round of 32 clash with Everton under-21s (7pm kick-off). Here’s all you need to know…

Striker Rhys Oates is set to start his first game for the Stags on Wednesday night since picking up a pectoral injury against AFC Wimbledon in August.

Left-backs Lewis Page and Stephen McLaughlin will be assessed prior to the trip to Goodison Park.

Captain Ollie Clarke is a doubt for the Papa Johns Trophy round of 32 clash but will be assessed ahead of this weekend’s league fixture at One Call Stadium against Colchester United.

Defender Riley Harbottle and forward Will Swan will be assessed ahead of Wednesday night's fixture after being replaced last Saturday due to cramp and a tight thigh, respectively.

Tickets can be bought online (stagstickets.co.uk).

Tickets can be purchased in person from the ticket office at One Call Stadium up until noon on Wednesday.

Tickets can also be purchased at the ticket windows at the Bullens Road ticket office at Goodison Park up until kick-off.
Prices for our Papa John’s Trophy round of 32 encounter at Goodison Park are as follows:

Coaches will depart at 2:15pm from One Call Stadium.

Coach prices are as follows:

Two goals in the dying embers saw Everton under-21s book their place in the last 16 of the Papa Johns Trophy as Mansfield let a one-goal lead slip deep in added time at Goodison Park.

Rhys Oates’ sixth-minute strike looked likely to prove the difference but the Toffees fought back to dramatically advance into the next round.

Oates started for the first time since August following a spell on the sidelines with a pectoral injury.

And his thumping early header put Stags in the box seat for much of the game.

Mansfield rarely looked like losing control of the affair but were undone as Everton twice got in behind late on.

Defender Kellan Gordon and midfielder George Maris were the only two players named in the starting XI from Saturday’s lineup against Sheffield Wednesday in the Emirates FA Cup, as Stags lost 2-1 at Hillsborough.

Left-back Stephen McLaughlin made his first start since Mansfield’s 1-0 win at Barrow on 05 November and defender James Perch captained the side in the absence of Ollie Clarke.

Stags made the best possible start by opening the scoring after just six minutes.

Midfielder George Maris whipped in a superb inswinging corner to frontman Rhys Oates whose bullet header flew into the net from the edge of the goal area.

The same man had a better chance moments later when he kept onside in the Stags’ box to receive a midfield pass, only to curl his effort over the angle.

Back at the other end, Maris slipped beyond his man to play a lovely wall pass with Oates, but couldn’t keep his shot down.

It was again bread and butter goalkeeping for Flinders on 24 minutes as he got down low to stop Stanley Mills’ 25-yard strike.

On 30 minutes, Stephen McLaughlin entered the referee’s book for a foul on Roman Dixon near the touchline.

Bowery might have done better four minutes later when he lashed over from the edge of the box following good play by Oates who darted down the right flank to provide the cross.

And Bowery had another chance to scribe his name onto the scoresheet on 38 minutes but couldn’t get his shot away.

Kellan Gordon whipped in a dangerous right-sided cross and after taking a touch, Bowery was charged down on the edge of the six-yard box by Everton captain Joe Anderson just as he was set to pull the trigger.

Flinders watched a long-range effort sail over his cross bar from Everton’s Isaac Price before Stags took their advantage into the interval.

Nigel Clough made a treble change at the break.

And it was Hewitt who delivered deep from the left channel on 56 minutes, but Everton ‘keeper Zan Luk Leban beat Bowery to the ball inside the six-yard box.

Midfielder Hiram Boateng took to the field for Oates as the game crept over the hour mark.

In a second-half of few opportunities, fellow midfielder Anthony Hartigan unleashed a 25-yard hit which whizzed over the bar.

His opposite number, Zan Luk Leban, then gathered well as Lapslie looked to put the game to bed with a 20-yard shot.

Will Swan was introduced in the final minutes for Jason Law in Stags’ final change.

Just as Stags looked to book their place in the next round, Everton turned the game on its head with a double salvo.

In the first minute of time added on, the Toffees clipped the ball into the box and after it inadvertently took a ricochet off the chest of John-Joe O’Toole, substitute Liam Higgins was on hand to rifle home from close range.

Everton took the lead three minutes later as Tom Cannon – who appeared offside – breached the Stags’ defence to latch onto a midfield pass and apply the finish in the middle of the Stags box to send the hosts through. 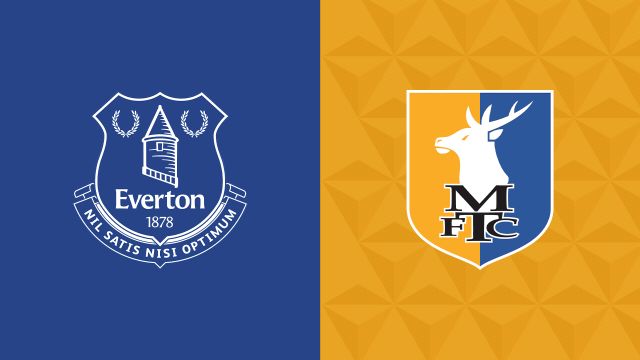 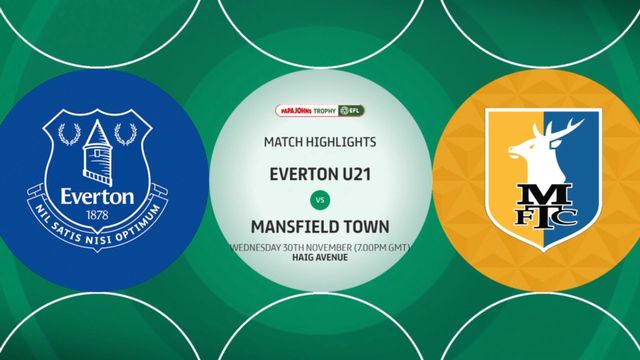 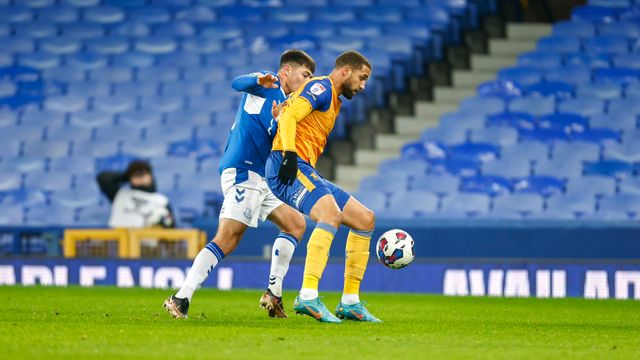