The Stags are back on the road this weekend, with a bumper away following expected for the clash against Northampton Town. Here’s all you need to know ahead of the Sky Bet League Two fixture…

Mansfield have a number of absentees for the game. Striker Oli Hawkins and midfielder George Maris were both substituted due to injury in the last outing against Oldham Athletic and are therefore doubts for this weekend.

Defenders Kellan Gordon, James Perch, George Cooper and Richard Nartey are also out with injuries, along with midfielder Ryan Stirk.

Midfielder Stephen Quinn and forward Tyrese Sinclair are suspended for the game.

Stags will be boosted by the return of centre-back Farrend Rawson, who served his one-game suspension in the home match against Oldham.

The Stags have tightened up defensively of late but will be looking to get back on the winning trail this weekend.

Last time out for the Cobblers was a clash against Hartlepool, in which they conceded late on to lose 2-1 away from home.

We last faced Northampton away from home in the 2019/20 season. The Stags won the match 2-1, in their last fixture before the season was curtailed due to the coronavirus pandemic.

Striker Danny Rose and midfielder Willem Tomlinson were on the scoresheet for the amber and blue.

The referee for Saturday’s game will be Robert Lewis, assisted by Oliver Bickle and Kevin Morris. The fourth official will be Marvyn Amphlett.

Mr. Lewis last took charge of a Mansfield game in our 1-0 win away at Cambridge United last season.

The Stags received an initial allocation of 944 tickets, but have since been sent an additional 308 tickets. Prices are as follows:

The club have also received four pairs of wheelchair-disabled and carer tickets. Disabled supporters are required to show evidence of being on the medium or higher rate of disability living allowance to be entitled to a free carer ticket.

Tickets will not be available on the day of the game, with the fixture being an all-ticket affair.

The easiest way to purchase tickets for our match at Sixfields is via stagstickets.co.uk.

Tickets can no longer be posted out for this fixture. Online ticket sales will be available until midday on Thursday 14 October. Tickets will go off sale from the One Call Stadium ticket office at 3pm on Friday 15 October.

Stags’ fans will be housed in the Imperial Cars South Stand.

The aforementioned stand will be shown on your ticket, but all supporters should enter the stadium via the turnstiles in front of the Imperial Cars Stand.

A bar is available once you have entered the stadium, in a fenced-off area. Saturday’s hosts have informed us that no alcohol will be available from the bar, but food and soft drinks will be on sale.

Can't make it on Saturday? You can follow the action live via our Twitter match updates, which can be found here.

A goal in each half sealed a 2-0 defeat for Mansfield Town at Sixfields in Sky Bet League Two.

Aaron McGowan’s strike from outside the box put the hosts ahead in the 23rd minute before Cobblers skipper Fraser Horsfall nodded a second.

Manager Nigel Clough made one change to the team that drew 0-0 with Oldham Athletic at One Call Stadium a week ago.

Centre back Farrend Rawson returned to the starting XI following a suspension he picked at home to Barrow on Saturday 02 October for a red card.

Injured midfielder George Maris made way for Rawson who replaced Oli Hawkins in central defence. This allowed the former Portsmouth man to return to his more natural position of centre forward.

The visitors opted for a wide midfield diamond with Jordan Bowery (left) and Harry Charsley (right) occupying the wide positions.

Mansfield started well when James Clarke’s interplay with Charsley on three minutes found a way into the Northampton box before the chance was booted clear.

Northampton’s Sam Hoskins found space on the right to swing a cross into Kion Etete on 11 minutes. Returning defender Rawson beat his man to the ball and headed the danger clear from inside his own six-yard box, preventing the hosts’ first real threat.

The Stags were forced to rely on their counter-attacking abilities as Danny Johnson’s volley was blocked on 16 minutes following a period of Northampton possession.

A long throw into the Mansfield box was nodded clear to a waiting Northampton man on the edge-of-the-box after 23 minutes. Cobblers right-back McGowan settled himself in space to drive the ball through a body of players and into Nathan Bishop’s bottom right-hand corner to take the lead.

The ball dropped nicely for Shaun McWilliams moments later who sent a powerful half-volley over the Mansfield crossbar as Northampton looked to build on their early lead.

McLaughlin shook off his defender on the left wing to deliver the ball into an unmarked Oli Hawkins on 36 minutes. The forward’s header disappointingly found Liam Roberts’s arms as the Stags squandered a valuable chance of an equaliser against the run of play.

The remainder of the half lacked quality from both sides but Mansfield were able to seal out any threat from the hosts before half-time.

Booked midfielder Charsley was replaced by youngster Keaton Ward at the break to spare the number 7 from a potential second yellow.

Mansfield endured a scrappy opening the second half to form their first chance in the 56th minute. Bowery dummied a James Clarke delivery to play in Ollie Clarke who would have surely scored if he wasn’t beaten to the ball by McGowan’s challenge at the last moment.

Two minutes later, the hosts caused trouble in the opposing final third. Kioki’s grounded cross to Etete was intercepted by McLaughlin who cannoned the ball onto his own crossbar and clear of the penalty area.

Northampton doubled their lead in the 75th minute. Mitch Pinnock’s in-swinging delivery from the right wing found Horsfall who was unmarked at the far post. The Cobblers skipper headed downwards past a helpless Bishop in the Mansfield goal increasing his side’s lead to two.

Ex-Stag Danny Rose replaced Etete in the 79th minute to a standing ovation from the travelling amber and blue behind the goal.

Lapslie appeared to have won his side a penalty-kick in the 87th minute having been brought down around the edge of the box. Referee Robert Lewis conferred with his assistant to conclude that the Mansfield man had been brought down outside the box. Ward’s subsequent free-kick was curled over the wall and the crossbar.

A frustrating end to the match ensured Mansfield fell to defeat in Northampton.

Next up for the Stags is a home match against Port Vale on Tuesday evening. 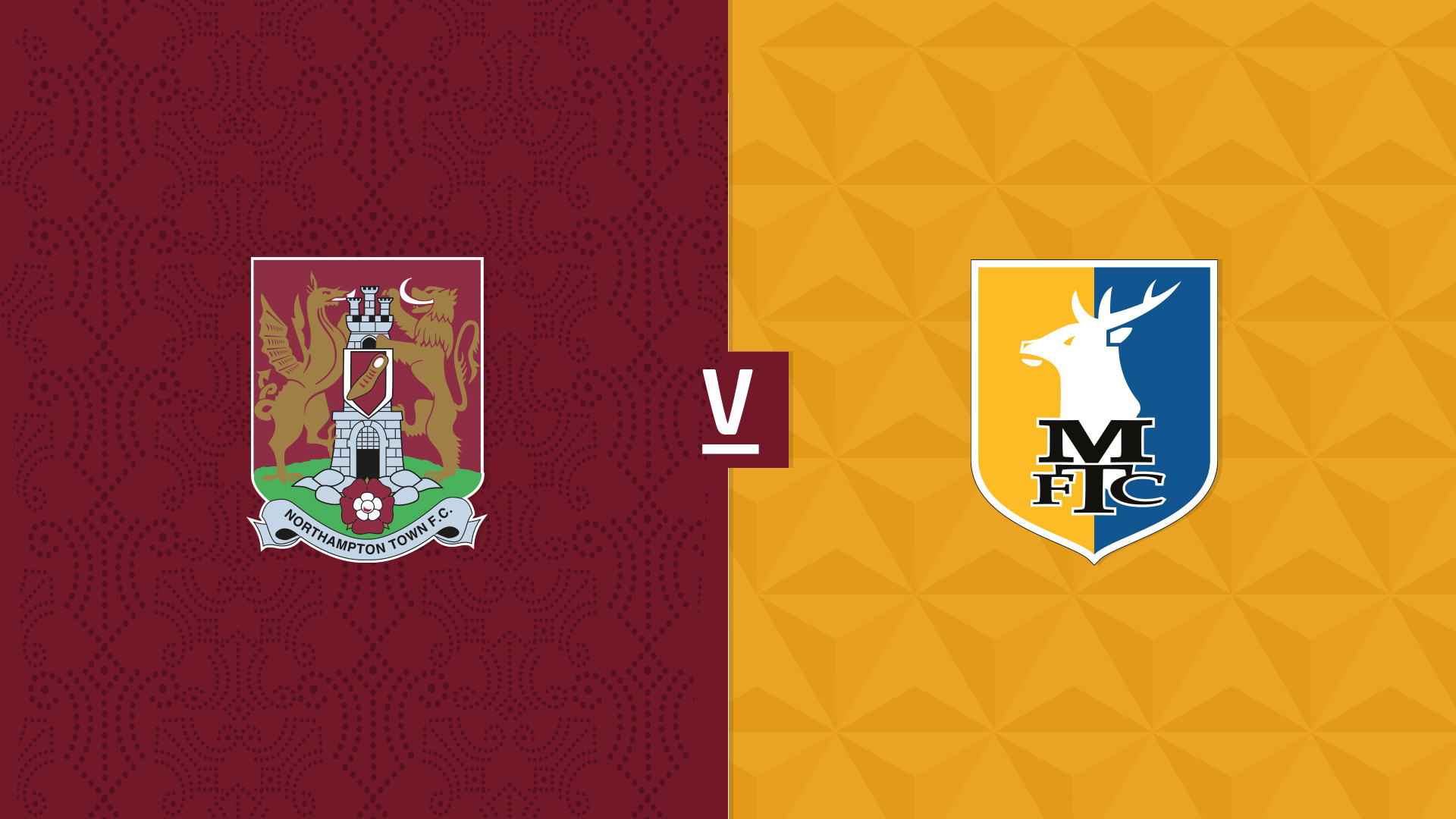 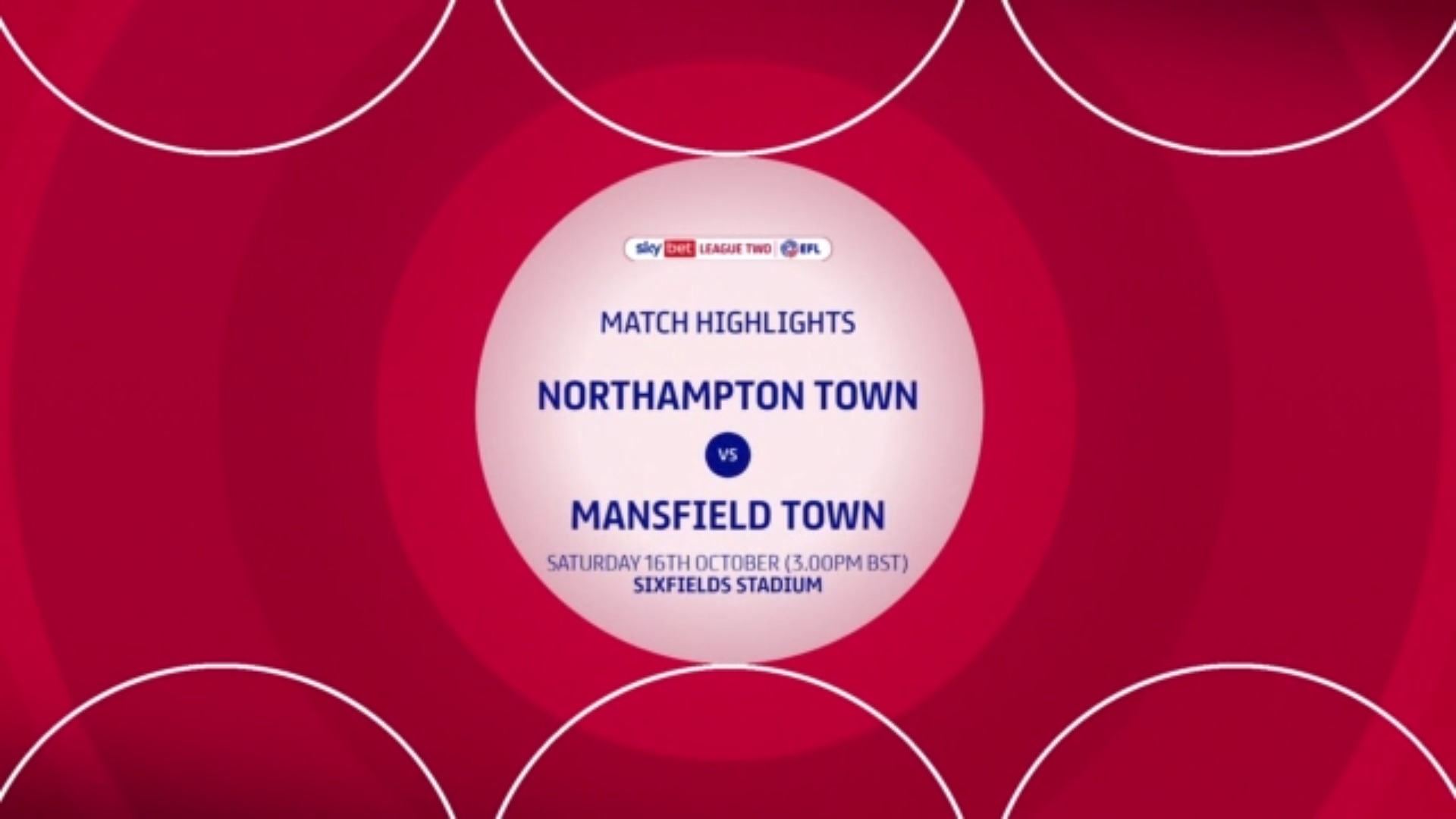 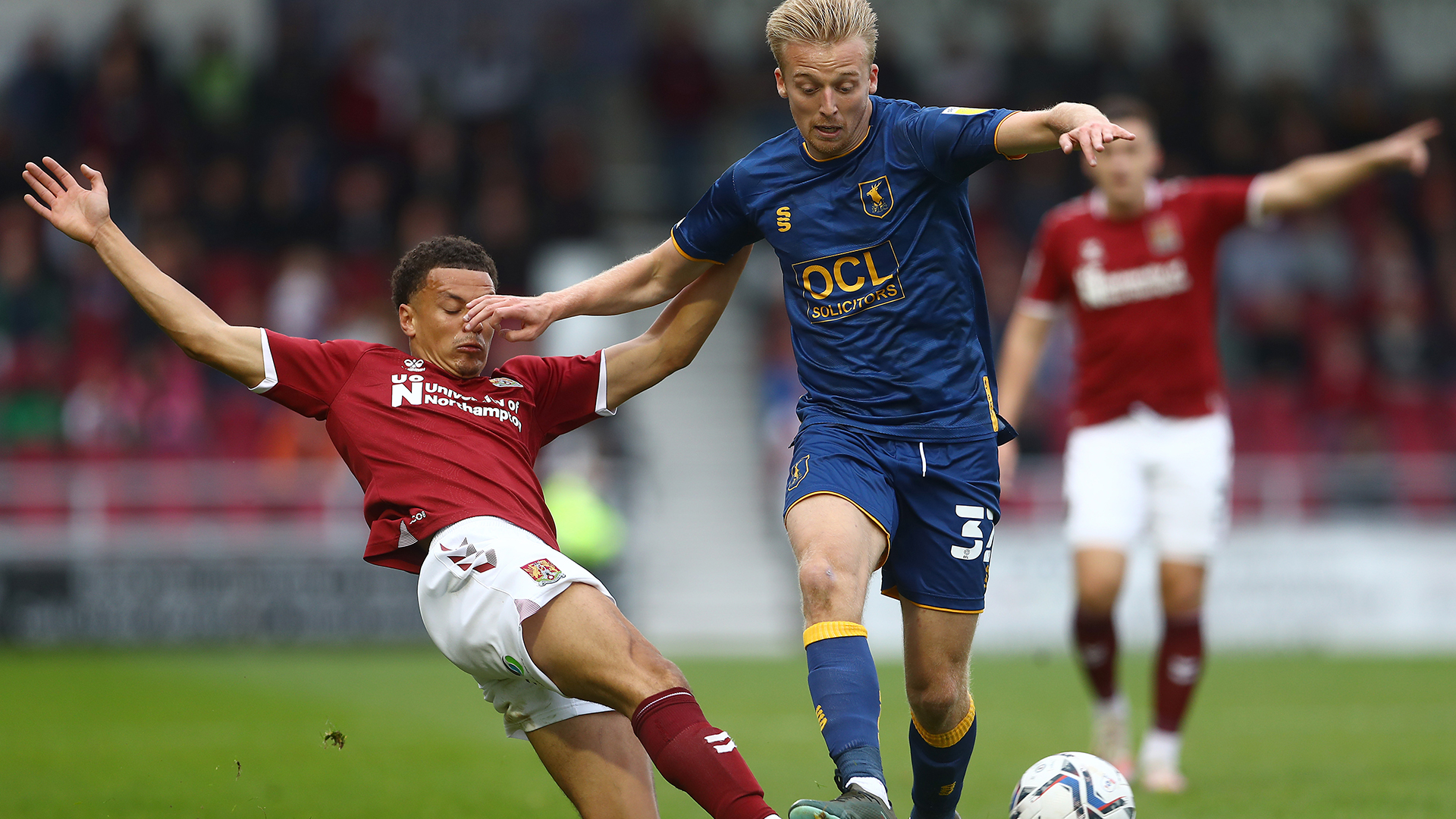