The Stags are back in action on Saturday as they face Exeter City at St James Park (3pm kick-off). Here is some of the key information for supporters ahead of the weekend’s Sky Bet League Two fixture...

Mansfield are still without a number of individuals for the game in Devon. Richard Nartey and Ryan Stirk are still unavailable due to injury.

James Perch continues his lengthy spell out on the sidelines and is not expected to feature again this season.

Full-back Kellan Gordon could feature however, and is set to be assessed in the days leading up to the game following his recent knee injury.

Nigel Clough is ‘hoping’ that midfielder George Maris could be available for the weekend's game and that the Stags’ midfielder may join in training on Friday.

The Stags were much-improved in their performance midweek but were made to settle for a single point in the 1-1 home draw against Port Vale.

Exeter were 3-1 winners away at Crawley on Tuesday night and they are unbeaten in their last 13 games in all competitions.

We last played City towards the back-end of the 2020/21 season. The spoils were shared on the day as the sides played out a 0-0 draw at St James Park.

The referee for Saturday’s match will be Sam Purkiss, who will be assisted by Richard Morris and Andrew Laver. The fourth official for the game will be Daniel Flynn.

Mr Purkiss last officiated the Stags in a 3-0 home defeat to Cambridge United in February 2021.

The Stags have received an initial allocation of 332 tickets for the fixture. Prices are as follows:

Children aged under four do not require a ticket but must sit on parents' or guardian's knee.

Tickets are available on the day of the game but will see a £1 increase in all categories.

The easiest way to purchase tickets is online via stagstickets.co.uk. Alternatively, visit the ticket office on Quarry Lane or call 01623 482 482 (option 1).

The club can no longer post tickets to supporters ahead of the fixture.

St James Park is located approximately 225 miles away from One Call Stadium and takes around three hours and 52 minutes to reach by car.

The postcode for St James Park is EX4 6PX.

The Centre Spot Bar is available to both home and away fans and can be found next to the VIP entrance of the stadium. The bar offers a large range of drinks, along with a pool table and darts board.

Hot food, confectionery and drinks are available from the kiosks inside the ground on matchday.

Unable to make it to the game on Saturday? You can follow all of the action from St James Park live via our Twitter match updates from here.

A report from the Exeter game will be published on the club website following the full-time whistle, and post-match reaction from the dressing room will be available to view on mansfieldtown.net and iFollow Stags.

Despite opening the scoring through Oli Hawkins' well-guided header, the Stags were narrowly beaten 2-1 away at Exeter City on Saturday afternoon.

Mansfield’s towering forward had headed the Stags in front in the 50th minute before Timothee Dieng equalised for the Grecians 11 minutes later.

Intense late pressure from the hosts lead to Matt Jay’s 83rd minute winner for the side that came into the fixture 13 games unbeaten.

Manager Nigel Clough made two changes to the side that earned a point against Port Vale on Tuesday night.

Right-back Elliott Hewitt was replaced in the line-up by James Clarke having suffered a glute strain in the 1-1 draw at One Call Stadium.

Mansfield's second change came at left-back with youngster Ryan Burke replacing the experienced Stephen McLaughlin, who had carried a knock against Vale.

Having signed earlier in the day, experienced midfielder John-Joe O’Toole took his place on the Stags' bench.

Ollie Clarke threw himself in the way of Kyle Taylor’s long-range attempt to halt the hosts' bright start inside two minutes.

That was before Mansfield found space to counter-attack on ten minutes but James Clarke’s delivery missed the arriving Jordan Bowery by an inch at the back post.

Neither side were able to take control of play in the following 20 minutes, with the majority of possession remaining in midfield and warranting few clear-cut chances.

Centre-back Farrend Rawson’s important block inside his own box allowed a turnover of possession in Mansfield’s favour on 31 minutes. Rhys Oates latched onto the loose ball to advance up the left wing and find Harry Charsley, whose first-time edge-of-the-box effort was scuffed and collected by Cameron Dawson.

Three minutes later Matt Jay curled an effort towards the bottom right corner but Bishop handled the ball well to ensure he didn’t spill it to the lurking Nombe a yard away.

With the game beginning to open up, Mansfield again advanced up field quickly following Jay’s squandered chance. This time Charsley’s cross to Bowery at the far post was connected with, but the striker’s effort was turned narrowly wide inside the 36th minute.

Exeter began the second period in flowing fashion as Matt Jay’s cut inside to shoot was tipped around the post impressively by Bishop in the 47th minute.

Mansfield reacted well to the Grecian threat by opening the scoring on 50 minutes. Charsley’s looped set-piece found Hawkins who towered over his marker to power the ball into the left side of the goal with his head. The striker’s guided header was his fourth Sky Bet League Two goal of the 2021/22 season.

Oates’ interception on the hour allowed Mansfield to break forward. The attacker laid the ball off to Bowery inside the box before Alex Hartridge swept up the danger at the crucial moment for the hosts.

Hartridge’s defensive play proved important moments later as the hosts struck an equaliser in the 61st minute. Substitute Padraig Amond’s cut-back cross was nodded in by Timothee Dieng who was unmarked on the Mansfield goal-line.

Momentum swung Exeter’s way following the goal but Mansfield still found holes to exploit and forge counter-attacking opportunities. Ollie Clarke’s forward ball on 72 minutes was well collected by Oates who arrived inside the box to shoot narrowly wide from a tight angle in a good attacking move.

With the crowd behind them, Exeter took the lead in the 83rd minute. Good play from Archie Collins found Jay at the far post who headed home his eighth goal of the season.

Nombe beat Mansfield’s offside trap to stride past Bishop before the young stopper recovered well to make a goal-saving sliding tackle in the 93rd minute.

Exeter saw out a slender victory as the Stags were left disappointed following a well-organised display against one of the division’s in-form sides.

Next up for Mansfield is a home game against Tranmere Rovers on Saturday 30 October. 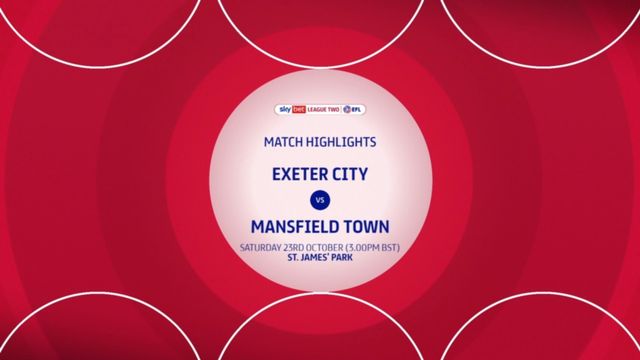 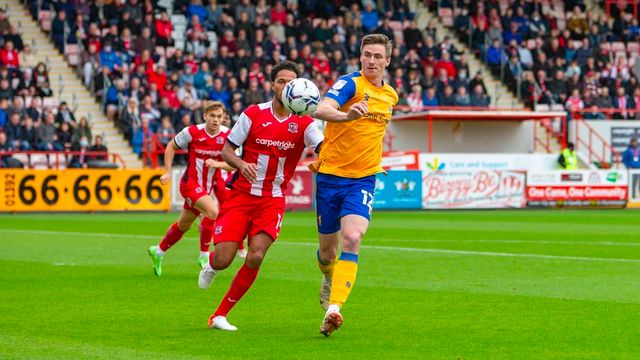