The Stags are back on the road this week for tomorrow night's (Tuesday 23 November) game against Sutton United at VBS Community Stadium.

Mansfield will be without defender James Perch for the remainder of the season after he fractured his skull in training.

Fellow defender Richard Nartey is expected to return to training this week having not featured since September due to injury.

Forward Rhys Oates (groin) and midfielder George Lapslie (shoulder) are both doubts for the game.

Midfielder Stephen Quinn and forward Jordan Bowery are also doubts after picking up knocks in the 3-1 win at home to Scunthorpe on Saturday.

The Stags have won five matches in all competitions. Victories against Tranmere, Sunderland, Newcastle under-21s, Stevenage and Scunthorpe mean Mansfield have recorded their best run of victories since October-November 2017.

Sutton were beaten by Leyton Orient 4-1 in their last outing.

The south London outfit outfit have won three out of their last four games in all competitions and sit in ninth position in Sky Bet League Two.

This will be the first meeting between the two sides.

The referee for Tuesday’s game will be David Rock. He will be assisted by Damith Bandara and Kevin Howick.

Tickets for tomorrow night’s game are now off sale.

The coach will be departing One Call Stadium at 2pm on the day of the match.

Please note, however, that the coach is full and new bookings cannot be processed.

Unable to make it to the game tomorrow night? Due to the away fixture taking place in midweek, supporters based inside the UK and abroad are eligible to watch tomorrow's (Tuesday) match for just £10 on iFollow Stags.

Commentary of the clash will be from Martin Shaw and Dean Foulkes.

You can follow all the action from the Sutton fixture live via our Twitter match updates from here.

A report from the Sutton match will be published on the club website following the full-time whistle, and post-match reaction from the dressing room will be available to view on mansfieldtown.net and iFollow Stags.

A Sutton United goal in each half ended Mansfield Town’s stellar winning run as the Stags were beaten 2-0 at VBS Community Stadium.

The Stags battled well in South London and were unfortunate not to craft a clear-cut opportunity from their 13 shots and superior possession.

Manager Nigel Clough named an unchanged side to the one that convincingly beat Scunthorpe United 3-1 at One Call Stadium on Saturday.

Captain Ollie Clarke lined up alongside youngster Ryan Stirk in the midfield who has found good form since breaking into the side following his winner at Stevenage.

The hosts looked to attack from the off and took the lead on four minutes. A lofted free-kick into the Mansfield box was headed down and then bundled home by Sutton defender Louis John who had found himself space.

Sutton maintained their pressure following the goal and they almost added a second on eight minutes. Jon Barden’s right-sided chip into the box was powered over the Mansfield crossbar by the rising Ben Goodliffe inside the six-yard box.

The Stags crafted their own headed chance two minutes later. Stephen Quinn’s corner was connected with perfectly by Oli Hawkins’ head but Sutton stopper, Dean Bouzanis, was alert to swat the effort clear with a strong right hand.

Mansfield soon settled into the tie with much of their play consisting of left-sided deliveries into the Sutton box with few clear-cut chances.

McLaughlin’s free-kick delivery again from the left on 35 minutes was well received by Jordan Bowery, who had shaken off his marker well to drag a half-volley narrowly wide of the left post.

Midfielder George Lapslie was introduced at the break for Stephen Quinn as the Stags looked to create more danger in the final third.

Mansfield pressed with Lapslie from the restart, trying to find a way through the central amber block between them and the Sutton United goal.

Isaac Olaofe reminded the visitors of Sutton’s danger on the break by blasting a right-sided counter-attack into Bishop’s side netting on 55 minutes.

Stirk nodded McLaughlin’s delicious delivery wide of the post before the full-back raced up the other end to make a goal-saving block. Sutton’s Ricky Korboa skipped into the Stags’ box to fire under Bishop but the sliding McLaughlin somehow scooped the ball clear.

Sutton sealed the win when Omar Bugiel turned his man in midfield to blast a left-footed strike into the top right corner from outside the box, leaving Bishop with no chance of reaching.

Mansfield introduced Tyrese Sinclair from the bench who immediately adopted a direct approach to try and dismantle Sutton’s tight defence.

Sutton’s clean sheet remained intact as the Stags went without any luck in the final third and fell to defeat in South London. 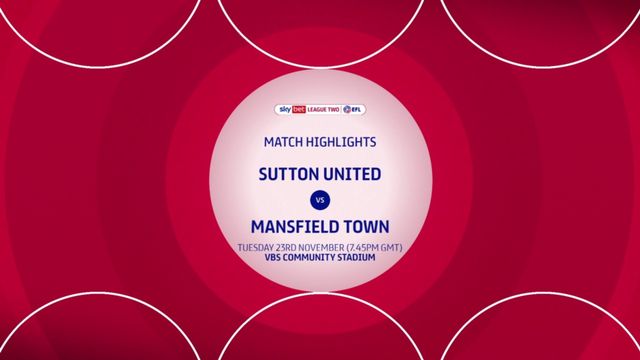 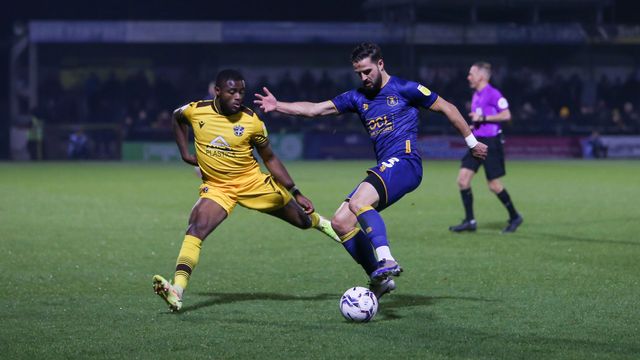