The Stags, fresh from an excellent 1-0 victory away at Sunderland in the Emirates FA Cup first round, will be hoping to record their third successive win in all competitions.

Mansfield enter the game off the back of consecutive victories and clean sheets in the last two outings after fine displays against Tranmere and Sunderland.

Newcastle under-21s have lost both of their Papa John’s Trophy matches this season in Northern Group H.

Once you have purchased your ticket, select the Print At Home option. Then, download your ticket via email. You will then be presented with an e-ticket, which you can scan at the turnstiles.

Unable to make it to the game on Tuesday? You can follow all the action from One Call Stadium live via our Twitter match updates from here.

Supporters can watch the game live for £10 by purchasing a match pass here with full-match commentary of the clash - courtesy of Martin Shaw and Dean Foulkes - by logging into iFollow Stags 15 minutes before kick-off.

A report from the Newcastle under-21s game will be published on the club website following the full-time whistle, and post-match reaction from the dressing room will be available to view on mansfieldtown.net and iFollow Stags.

For non-subscribers, audio match passes are available for just £2.50.

Tickets will be available online up until kick-off, with the ticket office also remaining open until the match gets under way.

Mansfield Town recorded a 6-3 victory against Newcastle United under-21s in an enthralling encounter in the Papa John’s Trophy.

Danny Johnson caught the eye in the contest, netting a trio of expertly taken goals as the striker recorded his first hat-trick in Stags’ colours.

The former Orient man released himself from the shackles of the United defence and found space in front of goal to convert James Gale’s cross in the 16thminute after Dylan Stephenson took an early lead for the visitors.

On 23 minutes, Joe White edged Newcastle ahead after some skilful play inside the right channel of the Stags’ area.

With the first-half drawing to a close, veteran midfielder John-Joe O’Toole struck the Stags level just as the Magpies looked to be heading into the break with a lead.

Mansfield came out fighting in the second-half as Danny Johnson fronted the amber and blue fight-back. The striker struck his second in the 53rdminute before converting from 12-yards for his third on 79 minutes.

Tyrese Sinclair added a fifth, also from the penalty spot, before Nathan Caine opened his Mansfield account to add the Stags’ sixth of the game in the dying embers.

The boss used the game to blood some of his more youthful squad members. James Gale made his debut, starting the match having signed from Long Eaton United in the summer. On loan Stoke City centre back, Will Forrester, also made his full debut for the club.

Stags threatened Newcastle early through their experienced forward players. Jordan Bowery drifted beyond black shirts to play in Danny Johnson, who had lost his marker well. The striker’s shot inside the box cannoned off the defender’s boot and over the crossbar, sparing the visitors after three minutes.

The Stags attacking start left them briefly short in defence on five minutes. Newcastle midfielder Lucas De Bolle was well aware of the vacant space and played a precise through ball into Dylan Stephenson, who arrived inside the box to slot the ball under George Shelvey in Mansfield’s goal.

Another of the Stags young players contributed to the attacking cause three minutes later. James Gale, lying slightly behind the attacking line, guided a delivery into the path of Johnson who smashed the ball past Dan Langley from close-range. Mansfield’s 28-year-old striker again showed his attacking nous to drift free off his marker before levelling the score.

Newcastle re-took the lead on 23 minutes.

Midfielder Joe White wriggled his way into the box to edge the ball through a body of players and past Shelvey.

Having gone behind, Stags retook control of the midfield but had only a catalogue of half chances to find a second equaliser before the break. Their best came in the 43rd minute as Gale danced free of his marker on the edge of the box to curl a left-footed shot narrowly wide of the top corner with Langley surely beaten.

That was before Mansfield’s experienced performer John-Joe O’Toole latched onto a cross inside the box on 45+2 minutes. The midfielder’s late run into the box aligned with the bouncing ball which he fired low past Langley to level the scores at half-time.

Having played his first match in six months at the weekend, O’Toole was replaced at the break by on-loan Birmingham City midfielder Ryan Stirk.

The youngster’s presence complimented Mansfield’s attacking play who took the lead on 53 minutes. James Clarke’s fizzed pass into Johnson was met on the turn by the striker who deceived the defender in the process. Having crafted space for himself, Johnson caressed a curling strike inside the left-hand post to beat Langley with power.

Rawson’s foul just outside the box on 58 minutes set up a dangerous free-kick for the visitors. White’s strike rattled the crossbar as the Stags looked to provide resistance to Newcastle’s increase attacking impetus following the fifth goal.

Link-up play between Johnson and Tyrese Sinclair played the young forward in. Sinclair’s effort flew wide as Mansfield upped their tempo in the final third.

The Stags’ efforts would be rewarded moments later as Johnson’s shot inside the box struck both posts before the striker was floored by ‘keeper Langley to earn a spot-kick. The 28-year-old stepped up to dispatch the ball into the left side of the goal and claim his hat-trick

The hat-trick hero was then replaced moments later for young forward Nathan Caine ahead of Mansfield’s important trip to Stevenage at the weekend.

Forrester’s forward run from centre back played Sinclair in again moments later who nipped in front of Langley to ride the contact with the ‘keeper and earn a second Stags penalty of the game. And Sinclair stepped up in Johnson’s absence to fire into the left side of the goal on 79 minutes to make it 5-2.

Newcastle scored a consolation through Michael Ndiweni, but Stags made it 6-3 when Nathan Caine latched onto a Sinclair rebound with seconds remaining. 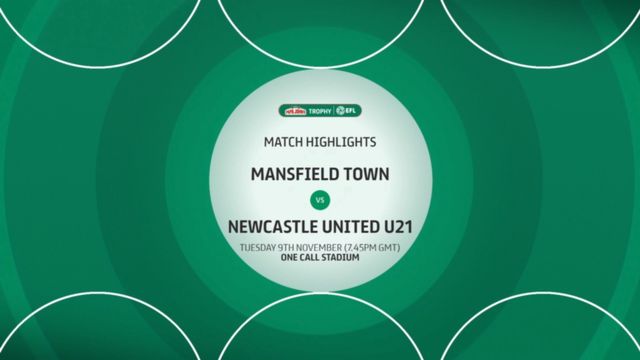 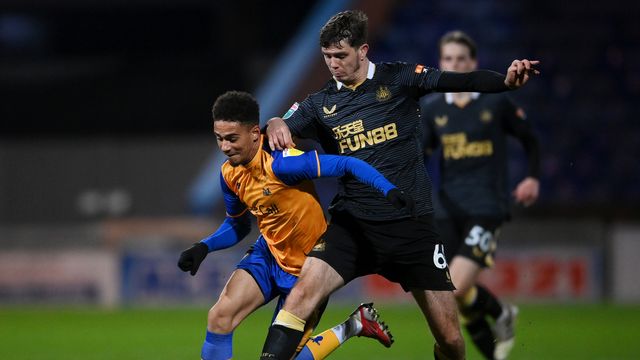