The Stags head to West Sussex this weekend for tomorrow afternoon's (Saturday 27 November) game against Crawley Town at The People’s Pension Stadium (3pm).

Mansfield will be without defender James Perch for the remainder of the season after he fractured his skull in training.

Stags’ manager Nigel Clough said forward Rhys Oates has a ‘chance’ of featuring against Crawley after missing the last two games with a groin injury.

Midfielder George Lapslie returned to the matchday squad against Sutton on Tuesday night and featured off the bench. It was the midfielder’s first appearance since injuring his shoulder against Stevenage.

Full-back Kellan Gordon missed the game on Tuesday after receiving a knock to his knee in training. The 23-year-old will be assessed before Saturday.

Midfielder Stephen Quinn will also be assessed before the weekend after being taken off against Sutton on Tuesday evening.

The Stags lost their first match in six outings against Sutton in midweek.

Mansfield had won five matches in all competitions prior to the Sutton loss after victories against Tranmere, Sunderland, Newcastle under-21s, Stevenage and Scunthorpe.

Crawley drew 1-1 at home to Newport in their last outing.

The south London outfit are one point and one place above the Stags in 17th position in Sky Bet League Two.

The last time the two sides met was in March 2021. Crawley won the match 1-0 courtesy of a stoppage time winner from James Tilley.

The referee for tomorrow’s game will be Andy Davies. He will be assisted by Craig Taylor and Adam Crysell.

The fixture - at The People’s Pension Stadium - will kick-off at 3pm.

Tickets are available now and can be purchased from the club's ticket office on Quarry Lane or by calling 01623 482 482 (option 1) from 10am, Monday to Friday.

Tickets will go off sale from the ticket office at midday on Friday 26 November.

Tickets can be purchased on the day of the fixture, however, there will be an increase of £2, applicable in all age categories.

On the day of the game, tickets can be purchased from the ticket cabin at The People’s Pension Stadium. You can collect pre-purchased tickets from the matchday ticket collection window in the grey portacabin.

Pre-purchased ticket prices are as follows:

The coach will be departing One Call Stadium at 8am on the day of the match.

Please note, however, that the coach is full and new bookings cannot be processed.

Unable to make it to the game tomorrow afternoon?

Live full-match commentary of the clash from Martin Shaw and Dean Foulkes will be available on iFollow Stags.

You can follow all the action from the Crawley fixture live via our Twitter match updates from here.

A report from the Crawley match will be published on the club website following the full-time whistle, and post-match reaction from the dressing room will be available to view on mansfieldtown.net and iFollow Stags.

Oli Hawkins starred as the Stags’ number 12 scored and created a goal to help beat Crawley Town 2-1 at The People’s Pension Stadium.

The summer signing led Mansfield’s forward line having been utilised as a centre-back in previous weeks.

Midfielder Ryan Stirk dictated the midfield in the first-half and assisted Hawkins for the Stags’ first goal of the game on 24 minutes with a well-placed cross.

James Tilley equalised for the hosts straight after half-time with an impressive strike from distance.

Manager Nigel Clough made four changes to the side that lost 2-0 away at Sutton United in midweek.

Hawkins returned to his natural place up front whilst captaining the side. Defenders Will Forrester and Farrend Rawson came into the line-up in the centre-back positions.

Stags’ midfielders George Maris and Ollie Clarke were on the bench whilst George Lapslie and Rhys Oates returned from injuries.

Mansfield began the contest well, trying to utilise their ariel advantage with Hawkins.

A positive start moved Stags up field to win a corner on eight minutes. Lapslie’s delivery arrived at the feet of Ryan Stirk inside the box whose thunderous strike was headed away by Crawley man Kwesi Appiah, diverting the ball’s course from reaching the top corner.

Mansfield then enjoyed a period of possession within their own half with space inside the attacking third limited by the hosts.

Elliott Hewitt, being deployed as a right wing-back, beat Crawley’s defensive line with a determined sprint on 24 minutes to get the Stags in behind the home side’s backline.

The defender held the ball up, laying it off to Ryan Stirk, whose delicate cross into the box was tip-toed past the ‘keeper by Hawkins who ghosted free of his marker to put Stags ahead.

Mansfield pushed for a second almost instantly after the restart. George Lapslie found himself within shooting range but Crawley ‘keeper Glenn Morris was alert to prevent the confident visitors from doubling their lead.

Crawley regained a grip on the game to prevent a Stags’ second before half-time without mounting any real challenge of an equaliser.

Mansfield’s dominance wasn’t carried directly into the second period as Crawley equalised in the 48th minute. Forward Jake Hessenthaler laid the ball off to James Tilley who, from distance, thumped the ball into the top right corner.

The hosts upped their tempo following the goal but the Stags’ defence remained resolute and organised to nullify the pressure.

That was until Hessenthaller’s right sided cross on the hour was taken by a gust of wind, driving it into the top of Nathan Bishop’s post and away to safety with the Stags defence deceived by the ball’s path.

Crawley began to gain momentum until a moment of magic from Oli Hawkins stopped it mid-swing.

The striker’s through ball, struck with the outside of his boot, swerved around the Crawley defender to play Oates straight through on goal. Oates used his pace to gather the ball and beat Morris in the forward’s typically composed fashion on 73 minutes.

Crawley expectedly pressured the Stags for an equalising goal but Mansfield sat in well to limit their hosts to half-chances which were not capitalised upon.

Sub Tyrese Sinclair was gifted a golden chance from Crawley ‘keeper Glenn Morris’ kick out. The youngster collected the mishit pass, dribbling into the box and firing against the outside of the woodwork inside stoppage time.

The hosts then rattled Mansfield’s crossbar with a flicked-on header by Kwesi Appiah in the third minute of injury time to spare the Stags and ensure that the Stags left The People’s Pension Stadium with a deserved three points. 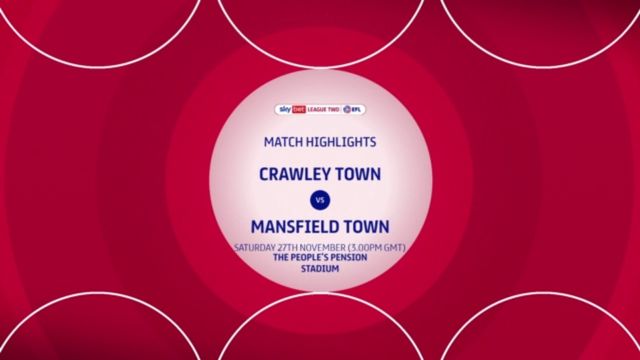 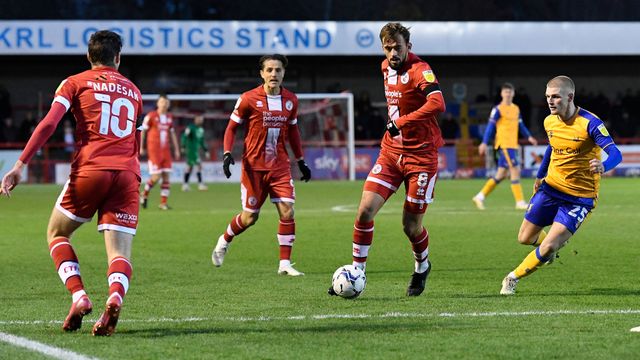