The Stags face promotion rivals Salford City on Monday afternoon (02 May) in a Sky Bet League Two encounter at The Peninsula Stadium (12.30pm kick-off). Here’s all you need to know…

Midfielder Stephen Quinn has a ‘50/50’ chance of facing Salford on Monday according to Stags’ boss Nigel Clough. The 36-year-old is recovering from a hip injury.

Captain Ollie Clarke will return to training this week after suffering a groin injury last month.

Victory against the Ammies would secure at least a play-off position for the Stags this season.

The last time the two sides met was in December 2021. The Stags won 2-1 at One Call Stadium.

The referee for the clash is Sebastian Stockbridge. Mr. Stockbridge will be assisted by Ollie Williams, Paul Newhouse and fourth official, Rebecca Welch.

Away tickets for the contest have sold out and are not available to purchase on the day of the fixture.

Thank you for your magnificent support.

Coaches will depart at 8.45am from One Call Stadium.

Sandy’s Bar & Kitchen will be open from 11am-6pm and showing the contest via the bar’s flat screen TVs on Sky Sports.

The delicious main menu will be served.

The hosts opened the scoring on two minutes through Jordan Turnbull’s header before Stags struck back thanks to McLaughlin’s excellent free-kick 13 minutes later.

The left-back netted his second of the game from the penalty spot inside the third minute of stoppage time at the end of the first-half, before Matthew Lund’s header equalised for Salford on 52 minutes.

The Stags named one change to the team that won Stevenage 2-0 at One Call Stadium on Tuesday night.

Oli Hawkins returned to the Stags’ defence for the fixture as right back Elliott Hewitt moved to the bench, allowing James Perch to fill in on the right of the defence.

The home side took an early lead inside 90 seconds after Ibou Touray’s left-sided free-kick found Jordan Turnbull inside the box, who nodded the ball into the top left corner.

Mansfield reacted well though and came close to drawing level on eight minutes. Following James Perch’s guided ball from the right wing to the back post, Matty Longstaff drifted free of his marker before knocking the ball agonisingly wide of the bottom right corner.

Rhys Oates continued Stags‘ push for an equaliser by waltzing through the midfield and firing a fizzing shot over the bar from 25-yards out just two minutes later.

However, Mansfield’s pressure came to fruition in the 15th minute after Jamie Murphy drew a foul from Turnbull to win a free-kick. Full-back Stephen McLaughlin stepped up to venomously whip the 20-yard set piece around the wall and into the bottom left corner with his trusted left foot.

Ten minutes later Stags were in again after Oates stole the ball off Salford defender Theo Vassell in a dangerous area. The striker drove at goal with the ball before ‘keeper Tom King came from his line quickly to deny the chance.

Stags’ stopper Nathan Bishop provided an important save in the 37th minute after Salford striker Matt Smith was played into the Mansfield box by Brandon Thomas-Asante. The forward knocked the ball onto his left foot before Bishop stood up well to absorb the powered strike.

A minute later, Oates collected the ball just outside the Mansfield box following the break down of a Salford City attack. After the forward dribbled the ball from inside his own half to the Salford box, King came from his line again to force Oates wide and prevent the opportunity.

Mansfield continued to threaten the Ammies for the remainder of the half and they won a penalty after McLaughlin’s wide free-kick struck the arm of Turnbull inside the Salford box. With pressure mounting inside the third and final minute of stoppage time, McLaughlin stepped up to coolly slide the ball past King and take an important lead into half-time for the Stags.

Salford drew level on 52 minutes when Thomas-Asante’s in-swinging cross from the left was flicked past Bishop by Lund’s header in front of goal.

Three minutes later, Lund struck Mansfield’s crossbar after Touray’s corner delivery was nodded on by the midfielder from the centre of the box. George Maris was able to hook the loose ball up the field into the path of Oates who collected it before his powerful shot was narrowly guided around the post by the arm of King.

The Stags enjoyed a period of sustained pressure after the hour mark. After Mansfield had knocked the ball around Salford’s box freely, Maris teed one up from a central position, 20-yards out from goal which curled narrowly wide of the bottom right corner.

Salford tested Mansfield on 74 minutes after Thomas-Asante worked his way in from the left to shoot low at Bishop’s near post, however the young stopper provided a strong low save.

The hosts pushed for a season-saving goal in the closing stages but Mansfield’s defence held strong to see out another important point away from home.

The Stags next face Forest Green Rovers at One Call Stadium in the final game of the regular season. 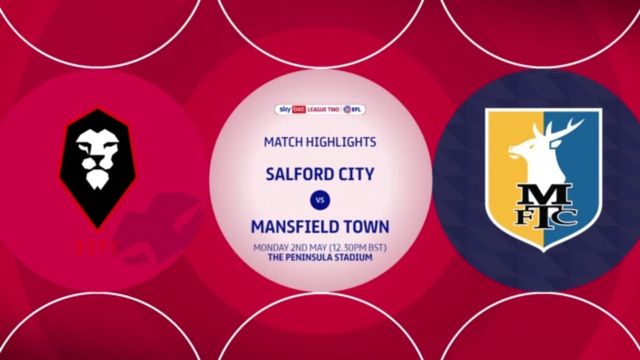 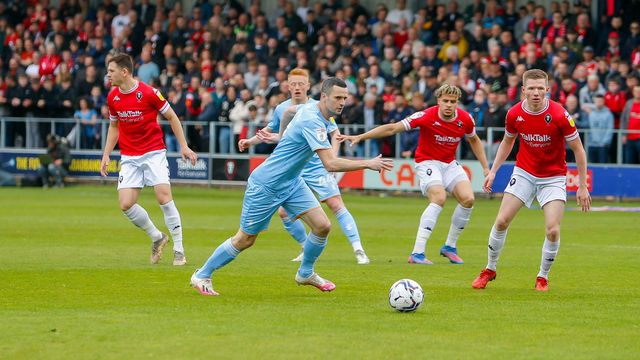