The Stags face Northampton Town tomorrow evening (Wednesday) in the second leg of the club’s play-off semi-final at Sixfields (7.45pm kick-off). Here’s all you need to know…

Midfielder Stephen Quinn is ‘doubtful’ to feature according to Stags’ boss Nigel Clough.

The 36-year-old was withdrawn in the first leg on Saturday due to an ongoing hip problem which has seen him side-lined in previous matches.

Midfield duo Matty Longstaff and George Maris will be assessed prior to the fixture.

Left-back Stephen McLaughlin will also be assessed but the Players’ Player of the Season claims he is ‘ready to go’.

Mansfield have not lost in their previous five matches.

Northampton have not lost in their previous four home outings.

The last time the two sides met was on Saturday in the Sky Bet League Two play-off semi-final first leg at One Call Stadium.

The Stags are currently 2-1 up in the tie courtesy of goals from Rhys Oates and Jordan Bowery.

The referee for the clash is Ben Toner. Mr. Toner will be assisted by Daniel Flynn, Michael Webb and fourth official, Samuel Barrott.

Away tickets for the contest have sold out and are not available to purchase on the day of the fixture.

A full and final allocation of 1,468 tickets, has been sold to Stags’ fans.

Thank you for your magnificent support.

Coaches will depart at 4pm from One Call Stadium.

Please note that membership cards must be shown.

Sandy’s Bar & Kitchen will be open from 12pm and showing the contest via the bar’s flat screen TVs on Sky Sports.

Delicious food from the main menu will be served.

The Stags Supporters’ Player of the Season struck the visitors ahead after powering Elliott Hewitt’s guided cross into the back of the net.

Mansfield defended with passion and desire in the closing stages, to seal out Northampton’s patient attack and book their place in the play-off final with either Port Vale or Swindon Town.

Manager Nigel Clough made three changes to the team that beat Northampton Town 2-1 in the first-leg play-off game at One Call Stadium.

The hosts began brightly when Sam Hoskins curled a right-sided cross to Josh Eppiah inside the first minute, however Nathan Bishop’s sharp reactions allowed the Stags’ stopper to prevent the glancing header with his fingertips.

Stags settled in the following period and withstood Northampton’s pressure inside an atmospheric Sixfields.

A fast-paced battle in midfield ensued as both sides enjoyed possession in tight areas of the pitch.

Mansfield’s Lucas Akins made a key intervention on 24 minutes when Eppiah’s right-sided cross to the back post was ready to be nodded home by a lurking Cobblers’ man, but the Stags’ number 34 cleverly flicked the danger clear with his head.

Five minutes later Rhys Oates did excellently to round Northampton defender Fraser Horsfall on the left wing before crossing the ball across goal, which took a deflection before being collected by Liam Roberts with Akins unmarked 10-yards out.

Mansfield sat in and waited for their opportunity to strike, which they did with efficiency on 32 minutes.

Akins’ pass in behind the Cobblers’ defence played through Quinn, who was in an offside position but not interfering with play, but the Irishman cleverly left the pass to Hewitt who had made an overlapping run into the box. The right-back met the ball superbly by whipping it into the feet of McLaughlin who had darted into the centre of the box before finishing coolly under Roberts with a first-time strike.

Northampton expectedly increased their pressure after Mansfield’s opener and almost reduced the aggregate deficit on 40 minutes. A floated cross into the Stags’ box fell to the feet of Hoskins who snatched at the chance by blasting it over the crossbar with Bishop off his line.

Mansfield remained assured at the back and enjoyed a dominant spell in the closing stages of the first half. However, their best effort came on 45 minutes when Akins half-volleyed the ball from the edge of the box into a body of Cobblers’ players before the referee blew to signal half-time.

The second-half restarted in a similar high-tempo fashion when Northampton raced into the Stags’ box on 48 minutes and appealed for a penalty after Jack Sowerby went down the right side of the box, however, the referee waved their appeals away.

The hosts knocked the ball amongst themselves inside the Mansfield half as Clough’s men remained resolute and organised to keep their opposition from threatening their goal.

Despite claims from the home support for a red card, Wallace was booked on 63 minutes for a sliding challenge on Eppiah which highlighted Mansfield’s desire and endeavour in the midfield battle.

Now under constant Northampton pressure, Mansfield exploded up the field on 74 minutes through Hewitt. The full-back dribbled the ball to the by-line before whipping a delivery to Bowery at the far post who headed the ball back across goal before Quinn’s overhead-kick attempt missed the target.

The Stags defended heroically by blocking every ball and heading every delivery clear with heart and belief as the contest headed towards its dying embers.

The hosts persisted in their attempts to crack the Stags, however Mansfield defended heroically to protect their two-goal aggregate lead.

The game was briefly paused in stoppage time when a handful of home fans invaded the pitch in despair as the Cobblers’ season crashed to a halt.

After an almighty effort by the Stags’ defence the referee’s whistle finally blew to secure Mansfield’s place in the play-off final to the jubilation of their euphoric 1,463 travelling supporters. 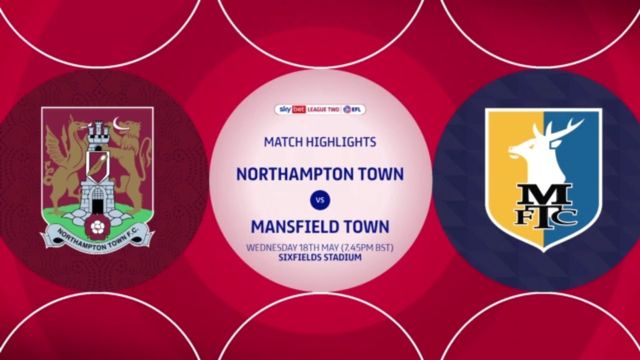 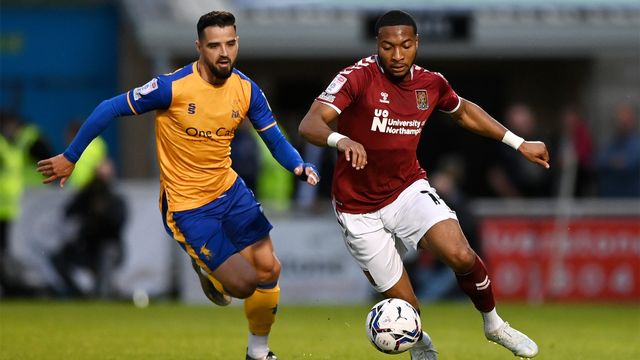