Manager Nigel Clough said Lucas Akins (hamstring), is the only ‘major doubt’ in the squad.

Midfielder Ollie Clarke sustained a groin injury in the Stags’ previous match away at Port Vale and will be assessed prior to the fixture.

Mansfield have lost just twice in their previous 16 league matches.

Rochdale have not won in Sky Bet League Two for five games.

The last time the two sides met was in September 2021. The match ended 1-1 at One Call Stadium.

Danny Johnson scored for the Stags.

Match tickets purchased for the originally scheduled fixture – on New Year’s Day – will still be valid for the rearranged game.

Tickets for the rescheduled match are also still available, either from the Stags’ ticket office or Crown Oil Arena on the day of the game at no additional cost.

Ambulant disabled supporters must be eligible on the middle to higher band of disability to be eligible for a free carer’s ticket.

The Coach(es) will be departing One Call Stadium at 3.30pm on the day of the match.

You can follow all the action from our clash away at Rochdale live via our Twitter match updates from here.

Mansfield returned to winning ways as Jordan Bowery came off the bench to dramatically seal a vital 1-0 victory over Rochdale at Crown Oil Arena.

The 30-year-old’s seventh league goal of the season in the 86th minute ended Rochdale’s 11 game home league unbeaten run, which had stood since 09 October 2021.

Stags’ crucial three points moves them within just four points of the automatic places, with three more games to play than Northampton Town.

Manager Nigel Clough made four changes to the team that faced Port Vale at Vale Park a week ago.

Midfielders Matty Longstaff and Stephen Quinn returned to the starting XI in the place of Ollie Clarke and George Lapslie. Defenders Farrend Rawson and Kieran Wallace moved to the bench as right-back Elliott Hewitt and centre back John-Joe O’Toole started for Mansfield.

Midfielder Stephen Quinn intercepted a stray pass from Rochdale’s Max Clark on six minutes to craft Mansfield’s first opportunity. The Irishman laid the ball off to Rhys Oates, who cut inside from the left to curl a right-footed shot into the arms of ‘keeper Jay Lynch.

The hosts soon provided their own threat, however, when they worked their way into Mansfield’s box through Clark on 13 minutes. The Rochdale left-back cut the ball back to James Ball, whose shot from the middle of the box was smartly tipped wide by Nathan Bishop.

The Stags remained patient and looked to strike Rochdale through selected openings.

On 25 minutes, Jamie Murphy’s pinpoint through ball played in Oates, who gathered the ball well before working it to Matty Longstaff. The lay-off from the Newcastle United loanee was guided narrowly over the crossbar by Murphy’s right boot.

Soon after, Oates was in again. The forward powered his way through the Rochdale midfield via a winding run before being tripped inches outside of the penalty area by Paul Downing, who received a yellow card. Murphy stepped up and curled the subsequent edge-of-the-box free-kick on to the top of the wall on 32 minutes.

Oates again tested the Rochdale goal on 40 minutes by shifting the ball onto his right foot from 20-yards out and stinging the gloves of Lynch with an arrowed strike.

A quiet ending to the first-half ensured the sides remained level at the break.

Mansfield restarted the game brightly when the ball settled nicely for Oates on 48 minutes. The forward controlled the ball, turned and directed a low shot at goal which was blocked by the legs of Lynch.

The hosts experienced more of the ball in the following period and were denied in the 57thminute when Elliott Hewitt made a superb sliding challenge to prevent Tahvon Campbell’s shot from inside the box.

Mansfield soon regained momentum. Following an attack on 66 minutes, Oates found space to again test the reactions of Lynch from range, though to no avail.

Two minutes later, Hewitt slid the ball in behind the defence into Murphy’s path, who gathered before firing a dangerous shot across goal and narrowly wide of the bottom left corner as Mansfield tried for the opener.

Mansfield dramatically took the lead with four minutes of normal time to play.

O’Toole played a delicate pass into Oates, who dribbled the ball into the left side of the Rochdale box before squaring it to Bowery. The striker drifted free of his marker at the far post, thanks to his well-timed run, before smashing the ball into the roof of the goal.

The Stags came close to sealing the contest as Oates wrestled the ball back from a Rochdale man in the second minute of injury time. The forward slid the ball into George Lapslie, whose shot from inside the box was agonisingly blocked by Rochdale captain Eoghan O’Connell.

Mansfield are next in action away to Oldham on Saturday as they look to further close the gap on the automatic promotion places. 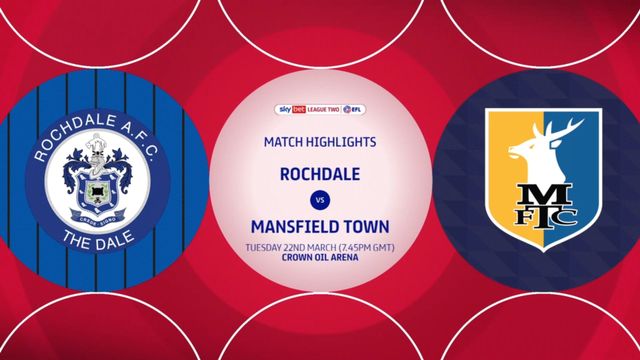 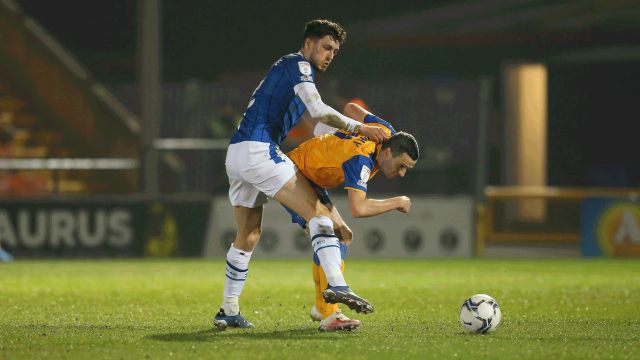