Defender John-Joe O’Toole is eligible to return to the Stags’ starting XI after serving his three-game suspension.

The boss added that Akins is the most ‘doubtful’ to play at Vale Park but Rawson and Quinn have an 'outside chance' to feature.

Mansfield’s narrow 3-2 loss away at Tranmere Rovers on Friday evening ended the club’s excellent run of 14 matches in the league without defeat.

Vale have lost just once in their last 11 games.

The last time the two sides met was in October 2021. The match ended 1-1 at One Call Stadium.

George Lapslie scored for the Stags.

The Stags have been given 850 tickets for the game. Tickets will be available to buy on the day of the game, but with a £2 increase in each age category. Please note; on the day sales can only be purchased via cash at the away sales’ kiosk outside the away stand.

Vale do have a dedicated stand for supporters with disabilities; a mixed supporters’ area, situated at the opposite end of the ground to the away end. Tickets for this stand must be booked directly at Port Vale FC, by calling 01782 655821.

Tickets will go off sale at the ticket office at 11am tomorrow (Tuesday 15 March).

The Coach(es) will be departing One Call Stadium at 4.30pm on the day of the match.

The SSA are providing a special offer on transport to the game.

The pricing structure for the offer is as follows:

You can follow all the action from our clash away at Port Vale live via our Twitter match updates from here.

Rhys Oates claimed his tenth goal in all competitions with a composed first-half finish as Mansfield Town lost 3-1 to Port Vale in Staffordshire.

Manager Nigel Clough made four changes to the team that faced Tranmere Rovers on Friday night.

Mansfield began with attacking intent by winning a corner thanks to Kieran Wallace’s clever play after 30 seconds.

With chances for both sides at a premium in the opening stages, Stags broke the deadlock with the game’s first real opening on 22 minutes.

Wallace’s pinpoint ball over the top of Vale’s defence from midfield saw Rhys Oates latch on superbly, before muscling his way into the box. The in-form frontman still had work to do, as he knocked it around the ‘keeper to coolly roll the ball over the line.

The hosts came close to striking back on 23 minutes as Vale captain Tom Pett directed an edge of the box shot wide of the post.

Port Vale equalised ten minutes later through striker James Wilson, who latched onto a through-ball pass to shoot under Nathan Bishop and level the score.

The hosts attacked Mansfield soon after half-time when Chris Hussey’s delivery to the back post was nodded across goal by Wilson and volleyed goalward by Harry Charsley. However, Wallace threw himself in the way of the effort from eight yards out to deny the former Stag on 48 minutes.

The midfielder again provided a key contribution to Mansfield’s defensive cause by mopping up David Worrall’s low cross after he had been played in behind by Aaron Martin on 55 minutes.

Mansfield reacted well to Vale’s pressure by forging chances of their own.

On the hour, Oates linked up with Lapslie, whose first-time shot was blocked by Nathan Smith from inside the box.

A minute later, the midfielder was in again. The ball settled nicely for Jamie Murphy inside the box who struck it with his instep, stinging the gloves of Aiden Stone, before the Vale ‘keeper provided a second save to deny Lapslie from poking home the rebound.

Vale took the lead on 76 minutes after the ball skewed off the head of Rawson on the edge of the box, falling to the feet of substitute striker Kian Harratt. The youngster’s initial shot was saved by Bishop but an unfortunate rebound fell back to him, and was slotted over the line by the Huddersfield loanee.

The Stags pushed for a late equaliser and were agonisingly denied by the crossbar on 85 minutes when Lapslie’s whipped ball across the face of goal cannoned onto the woodwork via the boot of defender Nathan Smith.

Soon after, the hosts extended their lead with two minutes to go. Jamie Proctor’s volley at the back post picked out Harratt who converted the chance from the centre of the box to claim his second of the game.

Mansfield are next in action at One Call Stadium this Saturday as the Stags look to prolong their home winning streak against Stevenage. 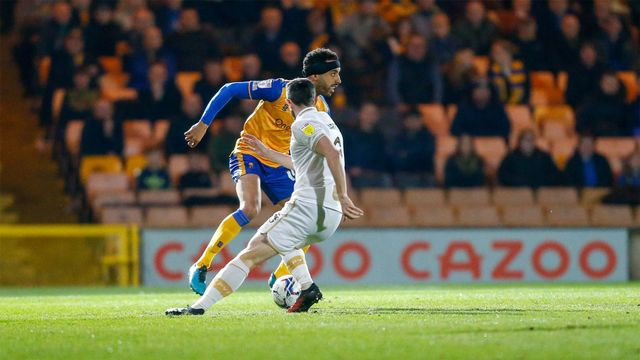