The Stags face Oldham on Saturday (26 March) in a Sky Bet League Two encounter at Boundary Park (3pm kick-off). Here’s all you need to know…

Forward Lucas Akins (hamstring) will be assessed prior to the fixture at the weekend.

Midfielder Ollie Clarke sustained a groin injury away at Port Vale last week and will also be assessed.

Mansfield have lost just twice in their previous 17 league matches.

The last time the two sides met was in October 2021. The match ended 0-0 at One Call Stadium.

The referee for Saturday’s game is Ben Toner. Mr. Toner will be assisted by Declan Ford, Stephen Wade and fourth official, Ollie Williams.

We have been given a total allocation of 1,800 tickets.

Tickets are available on general sale via the club's ticket office and online at www.stagstickets.co.uk

Tickets can also be purchased from the turnstiles at Boundary Park but please be aware of the below price increase. Supporters must pay by cash at Oldham.

Ambulant disabled supporters pay the relevant age category as above, and can acquire a free carer’s ticket if on the middle or higher rate of care component.

Tickets will go off sale online at midnight on Thursday 24 March.

Tickets will go off sale from the club’s ticket office at midday on Friday 25 March.

Collections of pre-purchased tickets on matchday can be made from Oldham's main ticket office.

The Coach(es) will be departing One Call Stadium at 11am on the day of the match.

Sandy’s Bar & Kitchen will be serving a delicious Full English Breakfast from 9am on the day of the game.

Unable to make it to the match on Saturday?

Due to the contest falling on an international weekend, UK and overseas iFollow Stags subscribers can watch the encounter at Boundary Park live for just £10.

You can follow all the action from our clash away at Oldham live via our Twitter match updates from here.

George Lapslie came off the bench to dramatically snatch a vital 2-1 victory in the 95th minute for Mansfield Town over Oldham Athletic at Boundary Park.

The Stags had gone behind in the first-half when Davis Keillor-Dunn nodded the hosts ahead on 24 minutes.

A spirited second-half performance from the Stags completed a dramatic turn around to clinch all three Sky Bet League Two points. Rhys Oates’ bullet strike on 53 minutes ignited the comeback before Lapslie sealed the contest with seconds to spare.

Mansfield are now just four points behind the automatic promotion places with three games in hand.

Manager Nigel Clough made one change to the side that secured a 1-0 victory away to Rochdale in midweek. The Stags’ only change came in midfield as Kieran Wallace replaced Ryan Stirk in the line-up, who moved to the bench.

Mansfield began brightly and attacked Oldham from the kick-off.

The Stags crafted their first opening inside five minutes when Stephen McLaughlin’s tempting cross dropped narrowly behind Matty Longstaff, who was lurking in space close to the penalty spot.

A minute later, Mansfield striker Rhys Oates wriggled his way to the edge of the Oldham box to sting the palms of ‘keeper Danny Rogers.

The hosts presented their own threat in response to the Stags’ positive start when Nicky Adams’ corner found Carl Piergianni inside the box, though his header was comfortably held by Nathan Bishop.

Stags forged their first big chance on 19 minutes. McLaughlin’s weighted through ball from the left wing slid Oates in behind the defence, but having gathered the ball inside the box, the striker’s left footed effort was saved by Rogers.

Despite Mansfield’s early pressure, Oldham took the lead on 25 minutes when Jack Stobbs’ right sided cross into the Stags’ box was headed into the goal by striker Davis Keillor-Dunn.

Mansfield managed to prevent Oldham from doubling their lead following the restart as the hosts gained momentum in the game. Nicky Adams tested the Stags’ resolve through a host of set-pieces and his delivery into Piergianni on 38 minutes was impressively tipped over the crossbar by Bishop after the Oldham centre-back headed goalwards.

Elliott Hewitt did his best to restore parity before the break when his driven run up the right wing ended in a guided cross into Oates lurking at the far post. However, Oldham defender Will Sutton was able to intercept the delivery at the final moment and keep the hosts ahead at half time.

Mansfield demonstrated their intent at half-time by introducing Jordan Bowery for Hewitt.

Stags attacked straight away when James Perch’s cross into Oates was directed into the gloves of Rogers on 47 minutes.

Less than a minute later, Bowery found himself with the ball in space inside the Oldham box. The forward did well to drill a cross into Longstaff, whose first-time shot forced an impressive point-blank save by Rogers as the visitors gained momentum.

The Stags’ efforts following the break came to fruition when Oates smashed home his 11th goal of the season. The dangerous striker collected the ball outside of the Oldham box, settled himself and fired it into the top left corner via a deflection on 53 minutes

Mansfield pushed for the lead and they again came close on 61 minutes. Oates did well to slide the ball into the path of Bowery from inside the box, playing him one-on-one with the ‘keeper, however, Rogers provided an important save to deny Bowery’s curled effort.

A minute later, McLaughlin teed up Quinn on the edge of the box, whose curled shot almost dinked the ‘keeper but for Rogers who was able to jump high enough to keep the effort out.

The left-back was involved again three minutes later when McLaughlin was able to burst his way into the Oldham box from the left before dragging a driven shot wide of the goal, with Oates lurking in the centre of the box.

Mansfield continued to pressurise Oldham and they came agonisingly close to taking the lead through substitute Lapslie on 86 minutes. McLaughlin’s left-sided cross found the midfielder unmarked in the centre of the box, but his low header bounced narrowly wide of the post.

Having tried and tested the Latics’ defence for the entirety of the second half, the Stags finally took the lead through Lapslie in the fifth minute of injury time.

With seconds remaining, Mansfield pushed up the field for the final time through Oates, who received the ball on the edge of the box, backed into his man and whipped the ball against the post. The alert Lapslie found himself in the right place to dramatically bundle the ball into the back of the net and ignite the spirits of the 1,321 travelling Stags behind the goal.

Next up, Mansfield look to prolong their winning run against 13th place Hartlepool on Tuesday night in County Durham. 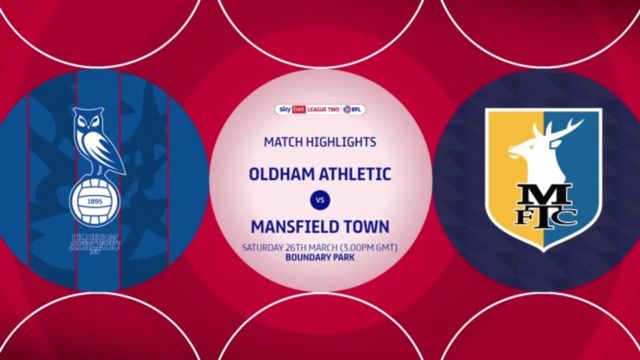 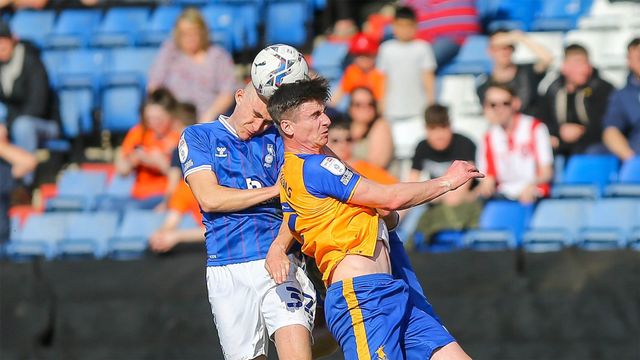