The Stags will continue their pre-season campaign against Grimsby Town on Tuesday afternoon, in a behind-closed-doors friendly at The RH Academy.

The match, which kicks off at 4pm, marks Mansfield's third pre-season fixture ahead of the new season. No supporters will be permitted entry to the game.

The Stags started their pre-season campaign with a 9-1 win away at Retford United, before a 1-0 defeat to Matlock Town on Friday.

After the Matlock fixture, boss Nigel Clough said: "It was a perfect workout at the end of a tough week for the lads. That was exactly how we planned it, where they had to work hard after a tough day [of training] yesterday [Thursday]."

The manager will be without Harry Charsley (thigh), Jimmy Knowles (knee) and Jason Law (ankle) for Tuesday's game, but will likely welcome back the trio for Friday night's fixture at Alfreton.

Mansfield will see several players - who have recently been self-isolating - return for the clash against Grimsby.

The club will be providing live match updates and coverage across the Stags' official social media pages.

iFollow Stags subscribers will be able to watch the match in full by logging into mansfieldtown.net/ifollow the following day.

Match highlights will be uploaded to iFollow Stags and the Mansfield social media pages, also on Wednesday.

iFollow Stags is available at just £4.49 per month or £45 for a season pass. To find out more, visit mansfieldtown.net/ifollow/subscribe.

Mansfield Town welcomed several players back to the first team fold as they battled with Grimsby Town in a friendly at the club’s training ground this afternoon.

Previously, Stags had been without notable figures after players self-isolated following notification by the NHS Track and Trace system.

This was Stags’ third pre-season friendly, following games at Retford and Matlock.

Erico Sousa’s second half strike was the ultimate difference, though Stags should have been on the scoresheet themselves, given the chances created in the first-half.

Mansfield started brightly and won a corner inside the opening minute when Maris’ shot was blocked and spun out of play.

As the heavens opened, Rhys Oates charged towards the goal line but his dangerous cross flew across the box, with no one able to connect.

On seven minutes, Kellan Gordon delivered from the same flank, the right-hand side, for Oli Hawkins to nod wide at the back post.

Oates then went on a solo run three minutes later, only to see his effort drag just beyond the far post.

Grimsby earned a corner in the 12th minute and a free-kick near the Stags’ box five minutes later, but both were ultimately dealt with by the home defence.

Joel Grant came closest to scoring for the visitors in the first half, and after showing neat footskills, he sent his effort wide.

Following a drinks’ break in scorching heat, Mariners’ midfielder Giles Coke lost possession, allowing Hawkins to roam forward. And after slipping it to Lapslie near the box, the effort from the former Charlton man was charged down.

Stags’ pressed their foot on the gas and Johnson went close on 31, while Oates saw another effort fly narrowly wide two minutes later.

At the half-time break, George Shelvey – untested in the first half – was replaced in goal by Marek Stech and Ollie Clarke came on for George Lapslie. 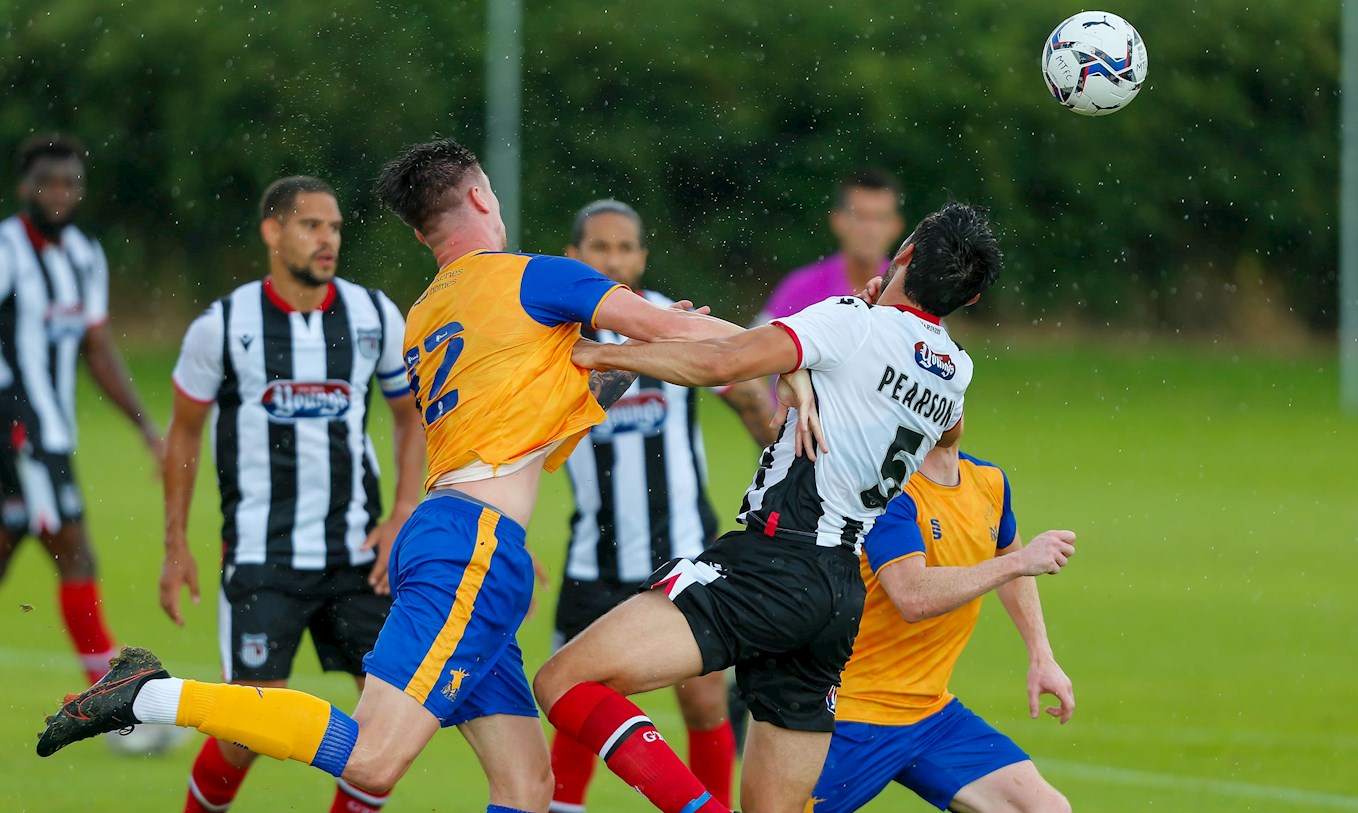 And what the second half lacked in chances, it gained in competitive edge.

Captain Clarke was soon written into the referee’s notebook, as he and Grimsby defender Luke Waterfall slid into a 50-50 challenge, which sparked a minor confrontation, leading to the cautions.

The lively Oates tried his luck five minutes after the restart, with experienced goalkeeper James McKeown well behind it.

At the other end, Max Wright drilled one low towards Stech, who claimed comfortably.

Oates headed over from a George Maris pass and John McAtee sent one over the bar in opportunities for both sides.

Grimsby then made ten changes as the game passed the hour

Soon after, Grimsby took the lead when Erico Sousa fired low beyond Stech from inside the box in the 66th minute.

As Stags searched for a leveller, Sinclair delivered a corner into the goal area on 69 which the ‘keeper had to parry clear.

Stech got down well on 77 to keep out a Grimsby attempt in the game’s last real chance.

George Cooper took the place of Elliott Hewitt in defence with ten minutes to spare, before the referee wrapped it up.