The Stags face Newport County at Rodney Parade this Saturday (19 February) for a Sky Bet League Two clash (3pm). Here’s all you need to know…

In line with Welsh government law, a Covid-19 vaccination pass is required to enter Rodney Parade.

Face masks are mandatory in Wales so will be required upon entry, but fans can remove their masks when in their seats, our hosts have informed us.

Supporters aged 18 and under to not require proof of a Covid-19 vaccination pass upon entry.

For supporters who have not had at least one dose of a Covid-19 vaccination, proof of a negative lateral flow test taken within 72 hours and uploaded onto NHS website will be required.

Paper and electronic copies of passes will be accepted.

Midfielder George Lapslie is expected the begin full training next week as he continues his rehabilitation from a thigh injury.

Manager Nigel Clough admitted that forward Rhys Oates is a ‘doubt’ for the contest in South Wales after he came off in the 0-0 draw away at Bristol Rovers with a groin problem.

The Stags have won 15 from their previous 19 games in all competitions.

Mansfield are currently sixth in the league table, four points off the top three.

The weekend’s hosts drew 3-3 in midweek against Oldham Athletic.

The Exiles sit one place and one point behind the Stags in seventh, having played two league games more.

The last time the two sides met was in August 2021. The Stags were 2-1 winners courtesy of goals from George Maris and Ollie Clarke at One Call Stadium.

The referee for the weekend’s match is Will Finnie. Mr. Finnie will be assisted by James Vallance, Ollie Williams and Mark Derrien.

Ambulant and wheelchair supporters pay the relevant age category. Ambulant disabled supporters must be on the middle or higher rate of disability allowance to obtain a free carer’s ticket.

Pre purchased tickets will go off sale from the One Call Stadium ticket office at midday on Friday 18 February.

Tickets are available to purchase on the day of the game from Newport County’s ticket office.

You can purchase tickets buy:
-Buying online via www.stagstickets.co.uk
-Visiting the ticket office in person at One Call Stadium
-Calling our ticket office on 01623 482 482 (option 1).

Coach(es) will be departing One Call Stadium at 8.30am on the day of the match.

You can follow all the action from our match away at Newport live via our Twitter match updates from here.

The hosts’ Josh Pask deflected Stephen McLaughlin’s shot from range into his own net on 68 minutes to put the Stags ahead.

Nigel Clough’s side had been dominant before John-Joe 0'Toole's 64th minute red card changed the dynamic of the contest.  The Exiles snatched a point late on via a Dom Telford penalty.

Manager Nigel Clough made three chances to the side that earned a point away to Bristol Rovers a week ago.

Jamie Murphy, Jordan Bowery and Rhys Oates were replaced in the starting XI by Ryan Stirk, McLaughlin and George Maris.

The game began in blustery conditions, courtesy of Storm Eunice, which swirled around Rodney Parade.

George Maris tempted the Newport goal for the first time inside three minutes by swinging a shot from distance towards Nick Townsend’s near post. However, the ‘keeper was able to claim the shot.

With Mansfield enjoying a sustained spell of possession, midfielder Ollie Clarke cut inside from the right wing. The captain's delivery picked out Matty Longstaff well, who drilled a low shot at Townsend on eight minutes.

The Stags continued their push for an opener. On 13 minutes, Quinn's through-ball played in Akins who squared a cross ahead of George Maris' reach.

Some more excellent movement from Quinn followed when the Irishman found space on the edge of the box before his shot was directed narrowly wide.

Two minutes later, Newport worked their way into Mansfield's box for the first time. However, League Two’s top scorer, Dom Telford, was well shepherded well by O'Toole before he flashed his shot into the side netting.

Mansfield continued to threaten Newport for the remainder of the half and dominated proceedings.

Elliott Hewitt enjoyed a creative first-half performance and demonstrated his attacking intent on 32 minutes. The full-back beat his man to fire an inviting ball across goal, but Quinn's wind-assisted effort on the slide beat the crossbar by an inch.

The Stags went into half-time off the back of a highly encouraging 45 minutes, displaying some excellent football and remaining a constant threat to the Newport goal.

The hosts made two half-time changes. Captain Matt Dolan and Ryan Haynes were replaced by Robbie Willmatt and Cameron Norman.

The second half began in equal balance with neither side able to craft a clear-cut chance before the hour mark. Mansfield's best opening within that period came on 57 minutes when Akins showed fine alter ness to intercept a Newport pass. However, Maris' subsequent threaded ball into Longstaff evaded the on-loan Newcastle midfielder just outside the Newport box.

The Stags persisted to knock the ball around Newport's box in crisp, creative fashion. On 63 minutes, Quinn again skipped clear of his marker, settled himself on the edge of the box and curled a well hit strike narrowly over the crossbar.

Newport's only threat came on the counter-attack with Mansfield's men camped within the attacking half. However, the Stags' defensive bodies continued to show excellent stamina and defensive perception to recover and deal with the hosts' attacks.

Following another well-worked attacking move, Stephen McLaughlin helped to open the scoring in Mansfield's favour on 69 minutes. The full-back worked his way into space and let fly from range. The Irishman's effort deflected off Pask and deceived Newport 'keeper Townsend to find the bottom left corner and ignte pandemonium in the away end.

In the 64th minute an altercation led to the dismissal of John-Joe O'Toole in an off the ball incident.

Centre back Oli Hawkins received a yellow card ruling him out of Mansfield's next two fixtures.

Newport were awarded a penalty when Oli Hawkins was adjudged to have handled Scot Bennett's shot. Telford converted the subsequent spot-kick in the 82nd minute.

With that, the hosts regained momentum but the Stags defended resolutely to see out a vital draw.

Mansfield head to Bradford next Saturday, with the backing of over 2,000 away fans set to rally them on at Valley Parade. 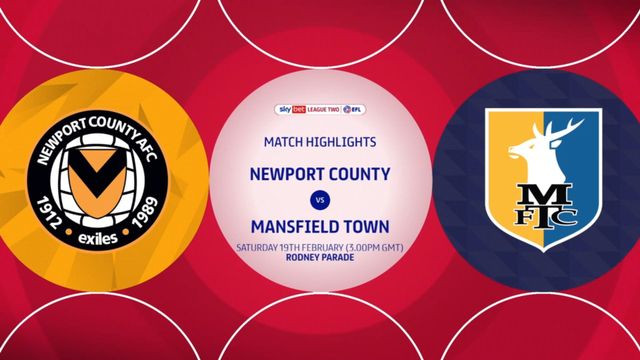 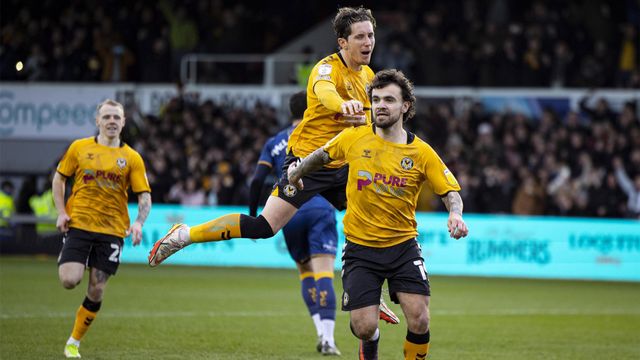