The Stags are on the road tomorrow evening for a Sky Bet League Two clash with Harrogate Town (7.45pm kick-off). Here's all you need to know...

George Lapslie will miss the trip to north Yorkshire due to a thigh injury. The midfielder could be in contention for the home match against Colchester next week.

The Stags set a new club record in the home 2-0 victory over Leyton Orient at the weekend.

Mansfield recorded an eighth successive league victory for the first time in the club's history.

The amber and blue have climbed up to sixth in the Sky Bet League Two table.

The Sulphurites lost 3-0 to Stevenage at the weekend.

The last time the two sides met was in September 2021 in Sky Bet League Two.

Harrogate were 3-1 winners at One Call Stadium, Rhys Oates bagged the Stags' goal.

The referee for the weekend’s match is Christopher Pollard. Mr. Pollard will be assisted by Robert Akin and Stephen Wade.

Tickets for the clash have sold out and are therefore unavailble to purchase on the day of the game.

The coaches will be departing One Call Stadium at 3.45pm on the day of the match.

One bus is already full, but there is still seats available on coach two.

You can follow all the action from our match away at Harrogate live via our Twitter match updates from here.

Mansfield Town extended their unbeaten run in the league to nine games as the Stags battled to a 0-0 draw with Harrogate on a windy night in North Yorkshire.

The visitors enjoyed a positive second half of football as new signings Lucas Akins and Kieran Wallace integrated effectively into the Stags’ system.

Manager Nigel Clough named an unchanged starting XI to the one that defeated Leyton Orient 2-0 at One Call Stadium on Saturday.

Mansfield’s deadline day additions, Matty Longstaff and Jamie Murphy, were ineligible for the fixture but are available for Stags’ clash with Colchester United next week.

Stags’ fast start was stunted inside four minutes as George Maris was downed following a heavy challenge from Harrogate’s Brahima Diarra. The Stags’ number 10 battled on though, and he came close to opening the scoring five minutes later, steering Elliott Hewitt’s tempting cross narrowly over the crossbar.

The hosts came just as close to finding an opener on 15 minutes. Following a corner, Harrogate’s Rory McArdle blasted a half-volley over Nathan Bishop’s crossbar.

Stephen McLaughlin almost provided a solution to the conditions for Mansfield on 26 minutes. The Irishman collected a loose ball in defence and drove with the ball, through the midfield and into the final third. Agonisingly though, the defender’s threaded ball into Rhys Oates was intercepted at the final moment as Mansfield began to turn the screw.

Striker Luke Armstrong fronted Harrogate’s attacking cause and threatened the Mansfield goal for the first time on 34 minutes by blasting the ball wide from a tight angle.

With Mansfield on the attack four minutes later, Stephen Quinn was clattered by a very late McArdle sliding challenge, leaving the Stags man briefly grounded. Maris’ subsequent free-kick unlocked the Harrogate defence to arrive at John-Joe O’Toole’s feet. However, Harrogate ‘keeper Mark Oxley was able to gather the defender’s volley and keep the scores level at the break.

An energetic restart from the hosts was well matched by Mansfield’s defence, who continued in their resolute nature.

On 52 minutes, Jack Diamond’s through ball linked up with Callum Kavanagh, who was adjudged to have beaten the offside trap, playing him through on goal. Bishop swiftly advanced from his line, remaining on his feet to make a superb one-on-one save.

Midfielder Kieran Wallace was introduced from the bench on 56 minutes, in place of Ollie Clarke for his second Mansfield appearance.

He almost made an instant impact as Hewitt’s long throw in was knocked down by Bowery, and poked narrowly wide by Wallace on the stretch in front of goal.

Mansfield came close to making a breakthrough again two minutes later. Oates’ razor-sharp awareness allowed him to nip in front of McArdle and intercept the ball, but the move broke down as the ball broke awkwardly for the through-on-goal striker.

Mansfield were not discouraged though, and they continued to pressurise Harrogate. On 69 minutes a floated ball into the Harrogate box was cushioned down by Akins, into the path of Bowery, whose shot from close-range was incredibly blocked on the goal-line.

Straight away Harrogate counter-attacked. Diamond’s shot inside the box was excellently saved by Bishop before Armstrong blasted the rebound over under pressure from Mansfield’s defence.

With Mansfield’s momentum, Ryan Stirk skipped clear of his defender to blast a shot goalwards from the edge of the box on 77 minutes. However, Oxley was able to tip the fizzing shot over with Mansfield’s pressure mounting.

The following ten minutes were tightly contested as neither side crafted a clear-cut chance until Harrogate’s Armstrong struck the crossbar on 90 minutes. The Stags’ tight defence remained resolute however, to record a second consecutive clean sheet and earn an important point away from home. 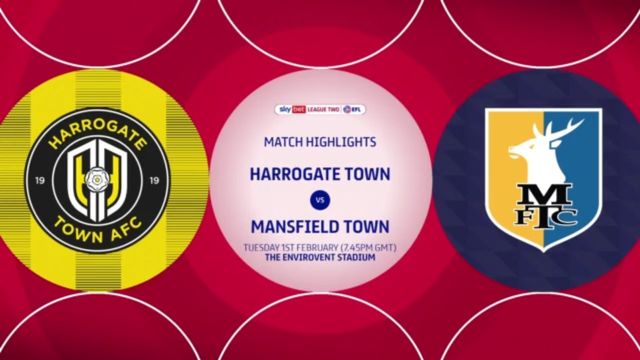 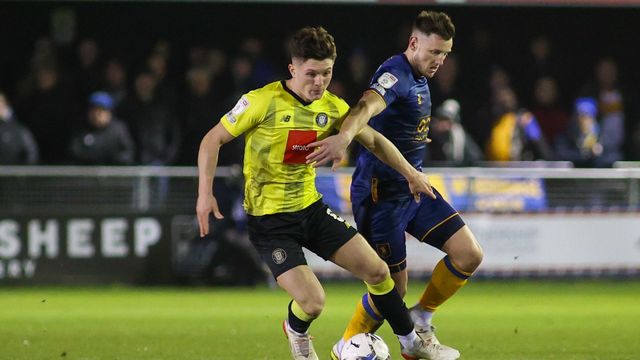