Midfielder George Lapslie was scheduled to resume to full training this week. The Stags’ number 32 will be assessed ahead of the match.

Manager Nigel Clough said that forwards Rhys Oates (thigh) and Jamie Murphy (hamstring) are both ‘doubts’ for the Bradford clash. The pair missed last weekend’s point away at Newport.

The Stags are on an excellent run of 12 games without defeat in Sky Bet League Two.

Mansfield sit in the play-off positions, in seventh place.

The weekend’s hosts lost 3-1 at home to Harrogate Town in midweek.

Saturday’s match will be new Bradford boss Mark Hughes’ first game in charge. The Bantams are currently 15th in the league table.

The last time the two sides met was in August 2021. Bradford won the match 3-2 at One Call Stadium, Oli Hawkins bagged twice for the Stags.

The referee for the weekend’s match is Andrew Kitchen. Mr. kitchen will be assisted by Lisa Rashid, Darren Wilding and Paul Stonier.

Please note that tickets for the game have sold out. Over 2,000 Stags’ supporters are set to back Mansfield at Utilita Energy Stadium.

No further allocation will be made available and away tickets cannot be purchased on the day of the game.

Thank you for your outstanding support.

Coaches will be departing One Call Stadium at 11.15am on the day of the match.

Sandy’s Bar & Kitchen will be serving a delicious Full English Breakfast from 9Am for just £5.50.

You can follow all the action from our clash away at Bradford live via our Twitter match updates from here.

Mansfield Town recorded a 13th straight league game without defeat as the Stags intensified their promotion push with an excellent 2-0 victory over Bradford City at Utilita Energy Stadium.

Stags’ top scorer Rhys Oates bagged his ninth goal in all competitions a minute before half-time to set Mansfield on their way to a victory in west Yorkshire.

Deadline day signing Matty Longstaff doubled the visitors’ lead on 48 minutes with his first goal for the club to ignite jubilation amongst the Stags’ superb 2,129 away following.

Manager Nigel Clough made three changes to the side that earned a point at Rodney Parade a week ago.

Suspended defenders Oli Hawkins and John-Joe O’Toole were replaced in the XI by Farrend Rawson and Jamie Murphy. Top scorer Rhys Oates also returned to the line-up to front Mansfield’s attack, in the place of Ollie Clarke who dropped to the bench.

Mansfield began brightly in an atmospheric Utilita Energy Stadium. Ryan Stirk’s clever forward pass from midfield played Oates into the right-hand channel on two minutes. The striker out-muscled his man to break into the box and flash a shot narrowly wide of goal.

Two minutes later, Mansfield were in again. Matty Longstaff’s enticing pass across the box found its way to Jamie Murphy, who was lurking at the far post. The Scotsman’s shot on four minutes looked to have been saved by Alex Bass at his near post, but the referee awarded a goal-kick.

With the Stags on top, Bradford threatened Mansfield’s goal for the first time on 17 minutes. A free-kick delivery from long range was floated into the box and glanced wide by a header from Bantams’ defender Paudie O’Connor.

With 15 minutes left of the half to play, Mansfield’s attacking presence regained full momentum, forcing Bradford onto the back foot on at every opportunity.

On 37 minutes, Jamie Murphy found space inside the hosts’ penalty area but his curling effort was blocked as Bradford battled to keep their clean sheet intact before the break.

However, Mansfield’s persistent attacking presence came to fruition just a minute before the half-time whistle was blown. Nathan Bishop’s long kick up field was knocked down into the path of Oates by a Bradford defender. The 27-year-old carried the ball before cutting inside from the right to curl a delightful left footed strike into the top corner.

The Stags restarted the second period with the same attacking intent as shown in the previous half by doubling their lead on 49 minutes.

Having won the ball back in midfield, the away side attacked down the left wing before Quinn’s drilled shot at goal was controlled by Oates. The striker reacted quickly to get the ball out of his feet and lay it off to Matty Longstaff, who tucked it past Alex Bass to send the mass of Stags’ fans into ecstasy.

Having just doubled their lead, Mansfield persisted to threaten the Bradford box in search of a third goal.

Quinn’s tight-angled effort from the left side of the box on 51 minutes forced Bass into an important near post save before Jamie Murphy tested the ‘keeper again from a similar position five minutes later.

Mansfield continued to work the ball well and protect their lead in the following period.

Andy Cook did his best to open Bradford’s scoring on 89 minutes with a near post header. However, Bishop displayed superb athleticism to tip the ball over the crossbar in eye-catching fashion.

Mansfield’s clean sheet means that the Stags have now only conceded just one goal from open play in their last eight league games. 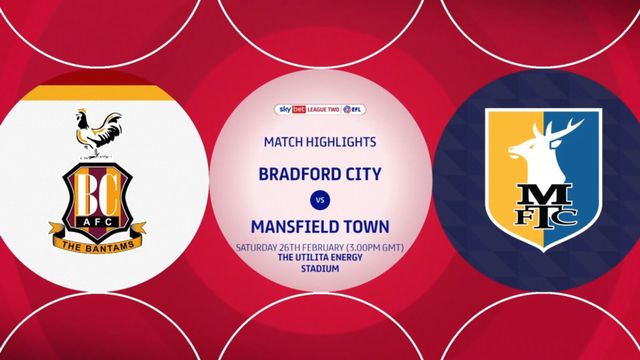