The Stags will make their first away trip of the season on Tuesday, when they travel to face Colchester United at the JobServe Community Stadium. Here's all you need to know ahead of the clash...

Boss Nigel Clough has a fully fit squad to choose from following the recent return of midfielder Harry Charsley, after his recovery from a thigh injury.

Colchester United manager Hayden Mullins also has a full quota of players ahead of the game.

The Stags have won both of their opening fixtures in Sky Bet League Two, both by a 2-1 scoreline.

Midfielders George Maris and Ollie Clarke were on the scoresheet on Saturday as Newport County fell to defeat at One Call Stadium.

Colchester will be hoping to respond after one draw and one loss in their first two league outings.

The two sides played out a 2-2 draw in their last meeting, which took place at the JobServe Community Stadium in February 2021.

A Tommy Smith own goal and a James Perch effort saw Mansfield earn a point on a freezing cold afternoon in Essex.

The referee for Tuesday's match will be Sam Allison, assisted by Andy Bennett and Stuart Butler.

The fourth official will be Michael Begley.

As per a request from Tuesday's hosts, tickets for the match are not on sale via the Stags' ticket office.

In order to gain entry to the match, Stags’ supporters are required to purchase a ‘Match Permit,’ via Colchester’s online ticketing platform.

Parking is available to book on a first-come, first-served basis at the stadium, via your account 'Dashboard' on colutickets.com.

Further travel information can be found in the 'Matchday Travel' section of our hosts' website, which can be accessed here.

Kiosks will be open inside the stadium, serving snacks and hot and cold drinks. Supporters should also be aware that the JobServe Community Stadium is a cashless venue.

The Stags Supporters' Association will be providing family friendly coach travel to the game. The coach will depart from One Call Stadium at 2pm. Travel prices are as follows:

Tuesday's match will be available to view live on iFollow Stags for £10. For more, click here.

Elliott Hewitt’s first goal for the club was cancelled out by a 95th minute Freddie Sears penalty as Mansfield drew 1-1 with Colchester United at JobServe Community Stadium.

Hewitt connected with Stephen Quinn’s left-sided cross to put the visitors ahead in the 73rd minute.

A trip inside the box from Stephen McLaughlin saw Frank Nouble go down with seconds remaining, seeing the hosts equalise late on from the spot.

Despite late heartache in Essex, the Stags remain unbeaten in their 2021/22 Sky Bet League Two campaign.

Nigel Clough made two changes to the side that beat Newport County 2-1 at One Call Stadium on Saturday.

Clough’s second change saw Hewitt make his first league start for the club at the expense of Kellan Gordon who dropped the bench.

Mansfield started brightly as last week’s goal scorer Ollie Clarke saw the opportunity to shoot from the edge of the box after eight minutes. The skipper’s effort was spilled by Shamal George before the U’s defence reacted swiftly to deny Johnson racing to convert the rebound.

Clarke threatened again moments later, collecting a loose ball outside the box before firing a shot into the chest of Colchester defender Tom Eastman, who had thrown himself into the path of the ball.

McLaughlin’s first time cross on the 15-minute mark found Johnson at the near post, whose header deflected narrowly wide having taken a touch from Eastman.

Mansfield’s left-back linked up with Johnson again minutes later as the forward’s headed effort was tipped to safety by George diving to his left, following a superb passing move by the Stags.

Colchester grew into the game as Nouble began to cause problems down the left with little help from his teammates in the centre.

McLaughlin’s in-swinging corner then found Johnson in the 28th minute but the number 11’s threatening header was dealt with by the Colchester defence.

Colchester’s Cameron Coxe found Nouble lurking at the back post six minutes before the break but the experienced forward couldn’t steer his close-range effort on target.

Luke Hannant continued Colchester’s push at the end of the first-half, cutting in from the right to curl a whipped effort into Nathan Bishop’s gloves with 44 minutes played.

A minute after the restart Noah Chilvers intercepted a stray George Maris pass outside the box before Farrend Rawson deflected the subsequent shot beyond the post.

Less than a minute later Stags’ striker Johnson found himself with room to shoot inside the box, again seeing an effort be denied by George.

Quinn’s shot was then partially blocked, skidding the ball to Oates at the far post, whose shot on the spin was wide.

Oates burst through the midfield after 57 minutes before being hacked down by the experienced Cole Skuse who subsequently received the game’s first yellow card.

The Stags continued to work the home defence as Oates’ shot inside the box nicked the boot of Miles Welch-Hayes, forcing George into a low save to keep the skidding ball out.

Quinn’s cross found Hewitt at the back post, who rose well to nod the ball past George and take the lead in front of the 224 travelling Stags behind the goal.

A Charlie Daniels cross caused problems for Stags six minute from time as a diving James Perch header cleared the danger with the hosts pushing for late drama.

Minutes later Alan Judge’s long-range free-kick dropped inside the Stags’ box before being scrambled away from the goal mouth.

A late block from Perch in the 92nd minute again kept Mansfield’s slender lead intact against intense pressure from the hosts.

Colchester’s efforts would eventually come to reward as McLaughlin was adjudged to have tripped Nouble inside the box to earn a 94th minute penalty.

Bishop managed to get a glove to Sears’ spot kick but it wasn’t enough to deny the Colchester man earning his side a point late on.

Next up for the Stags is a home game against Bradford City in Sky Bet League Two this Saturday. 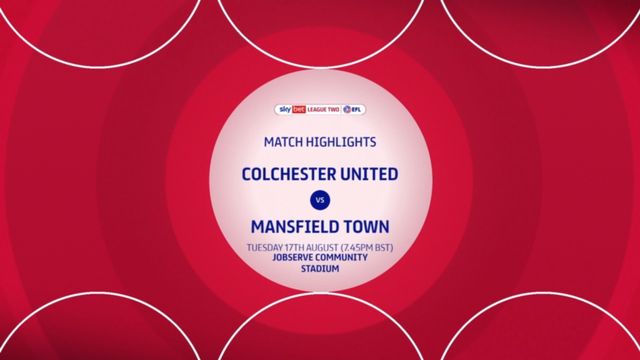 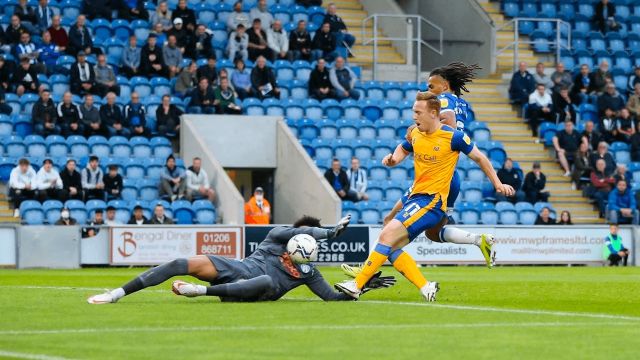