Kellan Gordon is expected to miss the fixture due to injury (knee).

Forwards Jamie Murphy (hamstring) and Rhys Oates (thigh) will be assessed ahead of the fixture against the Iron.

Midfielder Ollie Clarke (groin) will also continue to be assessed.

Midfielder George Lapslie was shown a straight red card in midweek at Forest Green Rovers. The club have appealed the decision in a bid to having the 24-year-old’s three-match ban lifted.

The Stags sit inside the play-offs in sixth position.

Scunthorpe are without a victory in their previous 10 Sky Bet League Two games.

The last time the two sides met was in November 2021. The contest finished 3-1 to Mansfield at One Call Stadium.

Ollie Clarke (brace) and Jordan Bowery were the Stags’ goalscorers.

The referee for Saturday’s match is John Busby. Mr. Busby will be assisted by Matthew Jones, Nik Barnard and fourth official, Tom Reeves.

Limited tickets for our Sky Bet League Two encounter at Scunthorpe United this Saturday are now on general sale.

Supporters can purchase tickets from the club's main ticket office at One Call Stadium and over the phone at: 01623 482 482 (option 1).

Tickets are not available online at stagstickets.co.uk.

Tickets are not available on the day of the game.

Under 12: FREE (Maximum of two per paying adult)

Stags’ supporters can pre-book car parking at the Sands Venue Stadium at a cost of £4 per car via sufctickets.com. Parking can also be purchased on the day, subject to availability, at £5 per car. Disabled parking is free for blue badge holders (allocated on the day).

Coaches will depart at 11:45am from One Call Stadium.

Sandy’s Bar & Kitchen is open and serving a delicious Full English Breakfast from 9am on the matchday.

Full English Breakfasts will be available for just £5.50.

You can follow all the action from our clash away at the Iron live via our Twitter match updates from here.

Mansfield Town cruised to a dominant 4-0 victory over Scunthorpe United at Sands Venue Stadium to further strengthen Stags’ position in the top seven of the Sky Bet League Two table.

Scunthorpe’s Anthony Grant deflected Stephen McLaughlin’s cross into his own net to open the scoring on 16 minutes.

The full-back then got himself on the scoresheet on 32 minutes before Ryan Stirk added Mansfield’s third six minutes later.

Manager Nigel Clough made three changes to the team that faced Forest Green Rovers in midweek.

Defenders James Perch and Farrend Rawson returned to the starting line-up as Oli Hawkins and Kieran Wallace moved to the bench. Suspended midfielder George Lapslie was replaced by Ryan Stirk.

The hosts began by testing the Stags’ defence inside the first minute when Liam Feeney’s corner found Joe Nuttall but the Scunthorpe man blazed his header wide.

The Stags soon gained control of the play and almost took the lead five minutes later. Stephen McLaughlin’s delicate cross from the left wing accurately picked out Jordan Bowery in front of goal, however the striker glanced his header narrowly wide.

Following sustained pressure, Mansfield won a corner on 16 minutes. Matty Longstaff knocked the ball short to Stephen McLaughlin, whose whipped delivery wasn’t dealt with by the Iron ‘keeper, allowing the ball to find its way to the back post.

Following a scramble, Scunthorpe midfielder Anthony Grant deflected the ball into his own net with Farrend Rawson and Jordan Bowery lurking behind him.

Stags worked the ball around the Scunthorpe half after taking the lead as they chased a second goal. Quinn played McLaughlin through in midfield before the full-back dribbled with the ball and flashed it wide of the post from the edge of the box with his left foot.

Shortly afterwards, Elliott Hewitt worked his way up the right wing and crossed to Akins whose back heel effort from inside the six-yard box was blocked.

Having built their way up the field, Stags struck a second goal on 32 minutes. Bowery powered the ball at goal from outside the box, which Rory Watson spilled into the path of Akins. And his touch of the ball into the stride of McLaughlin enabled the Irishman to smash it home from close range.

Six minutes later the Stags made it three. Ryan Stirk’s winding run from outside the box allowed the midfielder to muscle his way to the left of the area and coolly slot the ball under the onrushing ‘keeper.

The Stags restarted the second-half in efficient fashion by netting the fourth goal of the game in less than 20 seconds after the restart. Following the kick-off, Stags drove into the Scunthorpe half and Quinn powered the ball from just outside the box which clipped the inside of the left post before crossing the line.

Three minutes later Danny Johnson was played through. The forward arrived inside the box, drawing the ‘keeper from his line as the number 11 attempted to lift the ball over Watson’s head, however, the ‘keeper recovered to tip the ball to safety.

On 53 minutes, Hewitt hurled a long throw into the Scunthorpe box which was flicked on by Bowery into the path of Akins inside the six-yard box. The Stags’ forward wrestled with his marker before dragging a shot narrowly wide of the target.

By now Stags were in complete control, camped inside the home half.

In the 74th minute there was a stoppage in play as Scunthorpe fans behind Bishop’s goal began throwing tennis balls onto the pitch. The protest then escalated into a pitch invasion by around 50 home supporters before play resumed five minutes later.

The Stags’ players reacted well to the incident by restarting the match in a cool and composed manner.

The 83rd minute brought with it a second stoppage in the action as Danny Johnson’s powered shot struck the side-netting of the goal, causing it to lose its structure. Play resumed after the ground staff repaired the netting.

Mansfield crisply knocked the ball around in the closing stages as the Iron remained penned inside their own half.

The Stags demonstrated their superb range of passing to keep the ball from Scunthorpe and see out their victory. 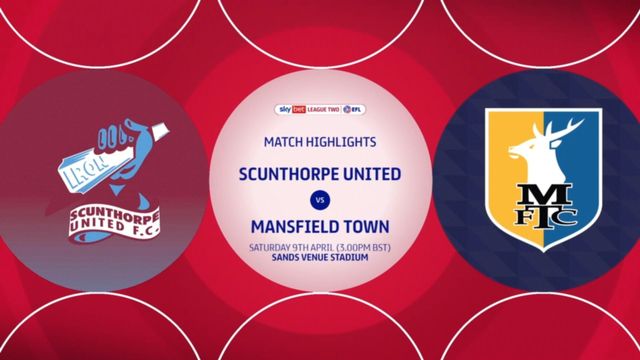 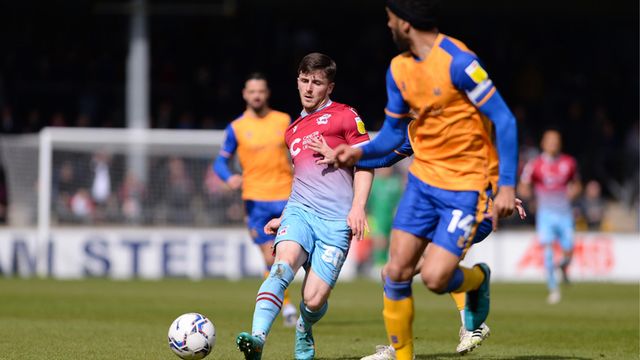