Manager Nigel Clough said forwards Jamie Murphy (hamstring) and Rhys Oates (thigh) are the two that are ‘most doubtful’ for the clash.

Midfielder Ollie Clarke (groin) will continue to be assessed.

Mansfield have lost just twice in their previous 20 league matches.

The Stags sit inside the play-off positions, level on points with third place Port Vale and having played a match less.

Table-toppers Forest Green have won their last two Sky Bet League Two games. Rovers had not recorded a victory for seven in the league prior to their two latest results.

The last time the two sides met was in March 2021. The contest finished goalless at One Call Stadium.

There are limited tickets available for tomorrow evening’s contest.

Tickets can be purchased online via stagstickets.co.uk until midnight tonight (04 April).

Supporters can also purchase tickets from the Mansfield Town ticket office until 12pm on matchday.

Tickets are available on the day of the game from Forest Green’s ticket office for a £1 increase on the below price list.

Prices for the encounter are as follows:

The club, as a gesture of gratitude to the fans that travelled to the previously scheduled match, will be funding travel for two supporters’ coaches to travel to Forest Green.

Coaches will depart at 3pm from One Call Stadium.

Spaces are available on a first-come, first served basis and availability is limited.

You can follow all the action from our clash away at the league leaders live via our Twitter match updates from here.

Mansfield Town’s four-game unbeaten run in the league came to an end as the Stags were beaten 1-0 by league leaders Forest Green Rovers at The Fully Charged New Lawn.

Josh March put the hosts ahead in the 14th minute after turning a rebounded effort into the Mansfield goal.

George Lapslie was harshly dismissed for the visitors after receiving a red card in the 49th minute.

The Stags performed positively in the second-half despite battling with ten men.

Manager Nigel Clough made two changes to the XI that defeated promotion rivals Northampton Town 1-0 at One Call Stadium on Saturday.

Striker Rhys Oates missed the game with a thigh injury and was replaced by Jordan Bowery. Midfielder Ryan Stirk moved to the Stags’ bench whilst Kieran Wallace started.

Stags started brightly and Stephen Quinn threatened the Forest Green goal for the first time on seven minutes. Elliott Hewitt picked the ball up from right-back and drove through the midfield, linking up with Quinn, who powered the ball narrowly wide of the top right corner from outside the box.

A minute later, Mansfield were in again. Excellent link-up play between Matty Longstaff and George Lapslie played Lucas Akins in inside the box. The striker shielded the ball from a defender inside the six-yard box before knocking it narrowly wide of the post on the turn.

Despite Mansfield’s positive start, Forest Green took the lead on 14 minutes. A floated ball into the Mansfield box was met by Jamille Matt, whose header was excellently saved by Nathan Bishop at point-blank range. However, Josh March was able to knock the rebound into the left side of the goal from the centre of the box.

The Mansfield ‘keeper provided another strong save just after the half-hour mark when he left his line to prevent March’s one-on-one shot from just inside the Stags’ box.

Having played positive, intricate football, Mansfield were unable to forge an opening in the hosts’ defence before the break.

Mansfield made two changes at the break as James Perch replaced Oli Hawkins in defence and Ryan Stirk came on for Kieran Wallace in midfield. Both outgoing players had been booked.

The Stags were reduced to ten men when Lapslie was harshly dismissed for a challenge on Ebou Adams in the centre circle.

Mansfield reacted positively to the decision by immediately pushing up the field, despite having a man less than the hosts.

Forest Green soon took a hold of possession and pushed for a second goal.

However, Mansfield posed their own threat on the break and they came close to an equaliser on 66 minutes when Akins teed up Stirk on the edge of the box but the midfielder’s effort curled wide.

Four minutes later a short Mansfield corner was delivered into the box by McLaughlin, which found its way to Longstaff, who creatively volleyed the ball into Luke McGee’s arms with his back to goal.

Danny Johnson was injected into the Stags’ attack just after the hour and demonstrated his intent on 74 minutes when the 29-year-old let fly from 30 yards, sending the ball over the bar.

Mansfield battled well with the league leaders in the closing stages despite being edged out by their opponents..

The Stags will continue their push for promotion on Saturday as Mansfield travel to 24th placed Scunthorpe United. 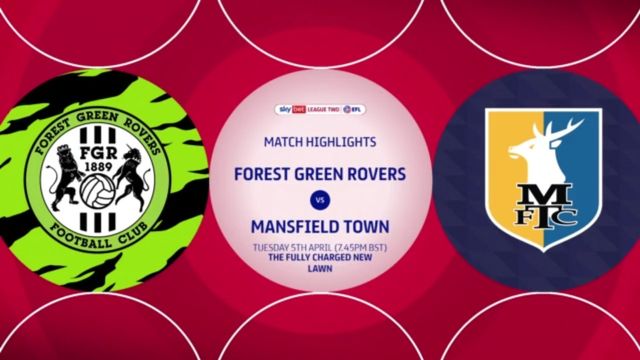 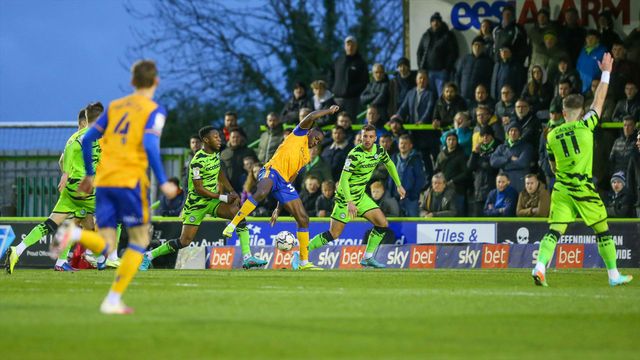