Kellan Gordon is expected to miss the fixture due to injury (knee).

Forward Rhys Oates is unlikely to feature in the encounter (thigh) but should return to training this week.

Monday’s match might also come too soon for full-back Stephen McLaughlin (hamstring) but manager Nigel Clough says the Stags’ number three has an ‘outside chance’ of being fit.

Captain Ollie Clarke will continue his rehabilitation after suffering a groin injury.

The Stags sit inside the play-offs in sixth position.

Carlisle are 19th in Sky Bet League Two having not won in their last four.

The last time the two sides met was in December 2021. The contest ended 1-0 to Mansfield at One Call Stadium.

Stephen McLaughlin scored the only goal of the game.

The referee for the clash is Ross Joyce. Mr. Joyce will be assisted by Chris Isherwood, Bradley Hall and fourth official, Conor Brown.

Pre-purchased tickets for the encounter have sold out.

Supporters can still, however, purchase tickets for the match on the day of the game from Brunton Park.

The prices for buying tickets on the day from our hosts’ stadium is as follows:

Ambulant disabled pay the relevant age category and are eligible for a free carer’s ticket if on middle to higher band.

*Family Junior:  A maximum of two juniors with one adult or one junior with one senior ticket can purchased. Any additional juniors are at full price junior.

Coaches will depart at 9am from One Call Stadium.

Both UK based and overseas iFollow Stags subscribers can watch the match live for just £10.

The Stags performed dominantly in the first half and dictated the play for the majority of the contest.

Jamie Murphy’s 41st minute strike from inside the box crossed the line but the officials waved play on.

In the end, Patrick’s strike after half-time decided the contest.

Manager Nigel Clough made two changes to the Stags’ team that narrowly lost 3-2 to Sutton United on Good Friday.

Defenders Farrend Rawson and Oli Hawkins were named on the bench as full-back Stephen McLaughlin and forward Jamie Murphy started the match.

Mansfield began on the front foot by threatening Carlisle’s goal inside the second minute. Full-back Elliott Hewitt drove with the ball down the right wing before squaring it to Stephen Quinn on the edge of the box who curled a dangerous effort wide of the post.

Two minutes afterwards, a Mansfield attack was cleared from the Carlisle box only to be collected by midfielder Ryan Stirk, in space 20-yards from goal. The youngster controlled the ball and drove an effort towards the bottom left corner however ‘keeper Mark Howard was able to scramble down to his right and deny the man on loan from Birmingham.

The Stags were in again on 12 minutes. Hewitt collected the ball at the by-line and squared a pass into Jordan Bowery who took it well with his back to goal to turn and see his clipped effort from inside the box tipped clear by Howard.

Despite Mansfield’s positive start, the hosts almost took the lead on 16 minutes. A floated ball into the Stags’ box was nudged over Nathan Bishop by the head of Carlisle defender Dynel Simeu thouth Stephen McLaughlin was alert on the goal line to hook the ball clear.

The Stags soon regained their momentum in the game and forced another opening five minutes later. Murphy’s clever through-ball played in McLaughlin who enticed Howard from his line before his attempted dink over the ‘keeper was applied with too much power.

Four minutes before the break, Stags worked an opening down the right-hand side. After good play from Lucas Akins, midfielder Jamie Murphy crashed the ball against the underside of the crossbar with the ball crossing the line, however, the officials waved play on.

Stags were forced to head into half-time on level terms but McLaughlin did his best to change that straight after the restart. Picking the ball up outside the box, the Irishman took a stride to power it into the side netting of the goal with his left boot.

Mansfield continued their sustained pressure and again came close as Quinn’s cross into the box on 54 minutes was poked narrowly wide by a Carlisle man. The subsequent corner found its way to Murphy who, on the turn, curled an effort towards the top left corner only to be denied by Howard.

Despite Mansfield’s dominance, Carlisle took the lead against the run of play. Omari Patrick worked his way inside from the left wing before guiding the ball into the roof of the net.

Shortly afterwards, James Perch made a superb sliding tackle to deny Joe Riley from doubling their lead after the midfielder drove into the box to shoot. Brennan Dickenson’s subsequent corner on the hour mark was flicked goalwards by Morgan Feeney at the near post but Bishop’s strong wrists were able to tip the ball clear via a touch on the crossbar.

Carlisle almost added a second on 73 minutes when Dickenson’s corner picked out Simeu inside the box however the defender’s header smacked against the post.

Five minutes later Carlisle defender Feeney guided a downwards header goal wards but Hewitt was able to tip the ball onto the post to safety from a yard out.

Mansfield applied pressure on the Carlisle defence in the closing stages in search of a goal. On 90 minutes substitute George Maris found space to drive at goal from the edge of the box but Howard was able to hold the fizzing effort.

Despite Mansfield’s best efforts in Cumbria, the Stags hope to return to winning ways at One Call Stadium this Saturday against Crawley Town. 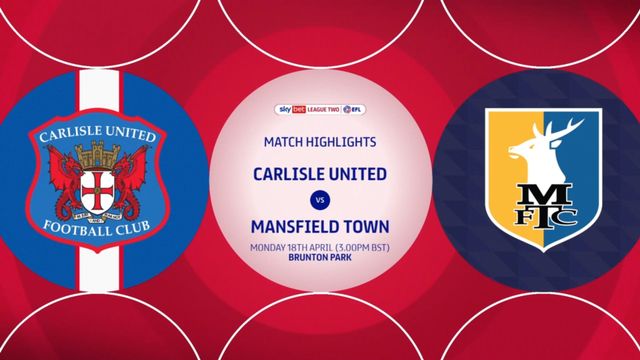 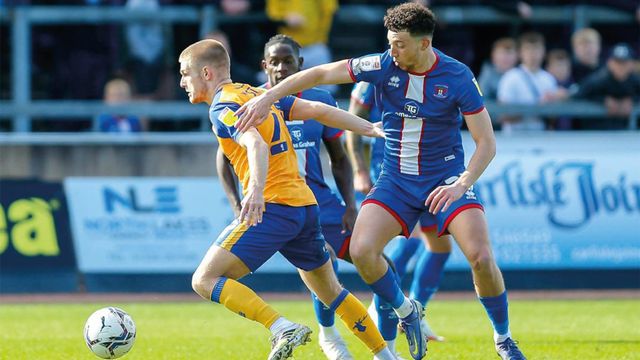