The Stags begin their EFL Trophy campaign on Tuesday evening, as they welcome Manchester City under-21s to One Call Stadium for a 6pm kick-off.

Graham Coughlan will be without wing-back Joe Riley for the clash, as the defender continues his recovery from an ACL injury.

The Stags were last in action on Saturday, when they faced Premier League Burnley in a behind-closed-doors friendly.

Midfielder Ollie Clarke and striker Danny Rose were on the scoresheet in a 4-2 defeat.

The referee for Tuesday’s game will be Tom Nield, assisted by Abbas Khan and Danny Gratton. The fourth official will be Kenwyn Hughes.

Mansfield Town were dealt a 3-0 defeat by Manchester City under-21s in their opening EFL Trophy clash at One Call Stadium.

On a breezy Tuesday evening, the visitors took the lead when Adrian Bernabe found the far corner with an accurate strike.

The Stags battled hard in the second period, carving out a handful of chances, yet it was a quick-fire double by Liam Delap that ultimately rubber-stamped victory for the Citizens.

Ollie Clarke made his official debut for the amber and blue, taking the captain’s armband, whilst Nicky Maynard returned to NG18 after resigning 11 days ago.

Competitive action returned to One Call Stadium for the first time in almost seven months with neither side wanting to overcommit inside the early exchanges.

Felix Nmecha lashed a free-kick wide of Marek Štěch’s target before Sinclair and Jamie Reid’s crosses were unable to connect with their desired target.

The Mansfield duo then came agonisingly close to linking up and breaking the deadlock. Clarke lofted a delicate ball towards Sinclair, but his low cross was brilliantly palmed to safety by James Trafford ahead of Reid waiting for a tap-in at the back post.

And less than one minute thereafter, the Citizen’s youngsters nicked the lead.

Bernabe, making headway down his left-hand side, was able to steal a yard on his nearest defender and calmly slot the ball into the opposite corner.

Soon after, Clarke’s swinging boot met Sinclair’s floated corner kick but was only able to hook his audacious effort narrowly beyond the upright.

Reid was quickly back in possession himself, as he sought to find Maynard with a perfectly weighted through-ball. Maynard, though, found Trafford equal to his effort.

City’s under-21s themselves replied with a couple of chances before the break.

Sam Edozie watched Stech get enough contact to beat his effort down the by-line, just minutes before a four-man Stags wall stopped a free-kick from causing any danger.

Coughlan’s men had the task of recovering from a one-goal deficit following the interval and twice they were unable to find an equaliser despite brilliant positions.

Possession ran too quickly towards Sinclair as the youngster could not dig the ball from underneath his grasp to shoot, prior to Reid seeing his header bounce off the turf and against the clenched fist of Trafford.

Mansfield were beginning to build substantial momentum. Maynard directed a powerful, flicked header above the bar and Sinclair then broke clear but Trafford made a smart stop down to his right-hand side.

The visitors, however, still posed a threat and would have doubled their lead had a perfectly-timed challenge not arrived from Aaron O’Driscoll, halting Delap’s effort.

On 75 minutes, the same City man raced clear of the Stags’ back-line but Rollin Menayese used his pace to eat up the ground ahead of him and dispossess Delap with a fantastic challenge.

Substitute Kellan Gordon then had appeals for a spot-kick waved clear as he felt the pressure of several light blue jerseys around him.

The opening EFL Trophy fixture for the new campaign continued to ebb and flow with Menayese again providing a vital interception, before Jimmy Knowles found himself the wrong side of a first-time delivery by Sinclair.

And the Stags were dealt two killer blows just moments before the full-time whistle.

First, Delap turned and weaved his way around the edge of the 18-yard-box to fire a strike into the bottom corner with deadly effect. The youngster then lobbed the ball beyond an onrushing Stech and tapped into an empty net.

It meant the hosts were unable to claim any points from their first match in Group E and would turn their attentions to Saturday’s Sky Bet League Two fixture against Tranmere Rovers. 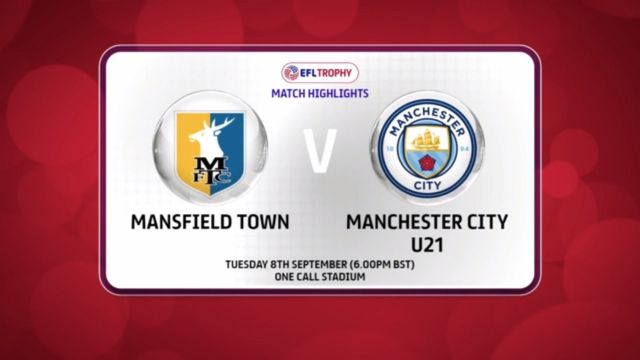