Next up for the Stags is a trip to face Leyton Orient on Saturday 19 September (3pm). Here's all you need to know ahead of the clash...

Mansfield will be without defender Joe Riley, as the wing-back continues his recovery from an ACL injury.

Stags could be boosted by the addition of winger Stephen McLaughlin after the former Southend United man signed for the club last week.

Striker Danny Rose will continue to be assessed ahead of the fixture.

The O's could be without striker Ruel Sotiriou for the match.

The Stags produced a positive performance in their opening league fixture, a 0-0 draw against Tranmere Rovers.

Mansfield were dominant throughout large periods of the match, going closest in the first-half by hitting the crossbar.

Leyton Orient made a winning start to their league campaign with a 1-0 win away at Oldham Athletic. They also booked a Carabao Cup tie with Tottenham Hotspur by beating Plymouth Argyle on Tuesday evening.

The referee for Saturday's game will be David Rock, assisted by Stuart Butler and Marc Wilson. The fourth official will be Aaron Farmer.

Goals from Jordan Bowery and Andy Cook were not enough as Mansfield Town drew 2-2 with Leyton Orient at the Breyer Group Stadium on Saturday afternoon.

After a steady first-half in E10, the Stags twice found the back of the net. First, Bowery opened his account for the season with a calm spot-kick before Cook swept home from inside the area.

However, Orient battled back with 10 minutes left on the clock as Danny Johnson and Ruel Sotiriou each found the target.

And it was Mansfield’s No. 1 from the starting roster who had the honour of producing the game’s first moment of quality. Marek Stech had positioned himself aptly to deal with Sotiriou’s bending free-kick and set up his side with their initial spell of possession.

Corey O’Keeffe – the recipient of last Saturday’s Man of the Match award – then looked to impose himself on the O’s, yet his cross was defended expertly by their back-line.

The Stags continued to boast the majority of the ball, showcasing some neat passages of play, before Sotiriou again stung the palms of Stech with a fierce drive from range.

Both sides were enjoying their own moments throughout the first period; however, the Stags were disappointed not to have let fly with ten minutes until the interval.

Bowery did well to hold up possession, laying into the patch of George Maris only to have Craig Clay’s last-ditch tackle deny the midfielder a shot from close proximity.

Then, Mal Benning found himself in space from O’Keeffe’s lofted cross to the back post, but he was unable to connect fully with his volley that lost its momentum as it struck the Breyer Group Stadium turf.

Pressure from away side preceded the hosts’ best chance through Johnson.

With his back to Rollin Menayese, the forward was able to turn and strike his effort against the base of the upright.

Into the second period and the tempo was cranked even higher by both sides.

Sam Ling burst clear down the right-hand side and drilled a flat cross into the area that was seen off expertly by Ryan Sweeney. The resulting corner was also cleared smartly, this time by Stech as he punched clear ahead of a crowd of bodies.

And it would be in the 52nd minute when the Stags took the lead.

Cook did brilliantly to chase down Stech’s long kick – harrying James Brophy into first squandering possession then secondly conceding the foul – which allowed Bowery to tuck home his first goal in a Mansfield shirt.

The No.11 quickly pounced on the opportunity for a second, but instead he inadvertently teed up Harry Charsley who forced a magnificent save by Lawrence Vigouroux.

It would, however, only be 19 minutes until the Stags were able to give themselves a two-goal cushion.

Charsley was involved this time in the assist-making as his low cross was latched onto by Cook, leaving the striker to sweep home from inside the area.

Several half-chances were conjured by the Stags but with nothing coming to fruition, Orient were able to halve the deficit.

Following a corner, Johnson made the most of his sight at goal and fired home to gift the O’s a lifeline heading towards stoppage time.

A lifeline that was firmly grasped in the 92nd minute of play. Sotiriou awaited a square pass as Brophy danced beyond several challenges and tucked the ball into an empty net.

Mansfield will now look for their first victory in Sky Bet League Two when they welcome Exeter City to One Call Stadium next weekend. 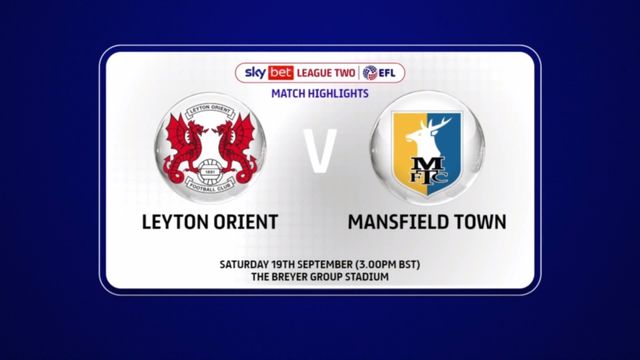 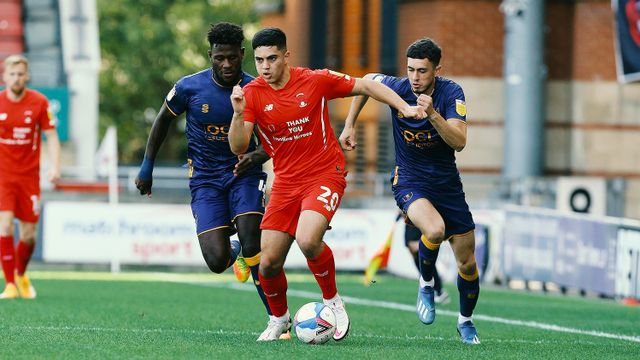