The Stags are back on the road on Tuesday 20 October as they travel to face Morecambe in Sky Bet League Two (6:30pm kick-off).

Mansfield will be without midfielder Ollie Clarke and wing-back Joe Riley, as the pair continue their recoveries from respective calf and knee injuries.

On-loan midfielder George Lapslie is suspended for the match following his red card against Bradford City on Saturday.

For Morecambe, midfielder Alex Kenyon is a doubt after being forced off in the first-half of their clash with Crawley at the weekend.

Mansfield will be looking to utilise this midweek fixture to bounce back from Saturday’s disappointing 3-1 defeat to Bradford City.

Morecambe will also be looking to react from defeat following their 4-0 loss to Crawley at the weekend.

Aside from a couple of heavy defeats, the Shrimps have made a strong start to the league campaign, winning four of their six matches.

We last faced Morecambe in February 2020, a 1-1 draw away at the Mazuma Stadium.

Wing-back Joe Riley scored his first goal for the Stags in the match, but a late Alex Kenyon goal saw the Shrimps earn a point.

The referee for Tuesday’s match will be Marc Edwards, assisted by Ravel Cheosiaua and Kevin Mulraine. The fourth official will be Chris Isherwood.

Mr. Edwards last took charge of a Stags’ fixture in our 2-2 EFL Trophy draw against Port Vale in December 2019.

Mansfield Town played out a 1-1 draw at Morecambe on Tuesday evening after Harry Charsley netted his first goal in amber and blue.

Under the floodlights at the Mazuma Stadium, the visitors were dealt a blow inside three minutes when Adam Phillips turned home on the stretch from close range.

Charsley, though, responded by levelling proceedings with an intricate finish that rolled into the opposite corner and left goalkeeper Jake Turner stranded – meaning his side left their seventh Sky Bet League Two affair with a point.

Graham Coughlan made three alterations to his starting line-up in Lancashire starting with Andy Cook – who scored his second of the season against Bradford last Saturday – replacing Nicky Maynard.

However, the Stags were handed an early setback with as little as three minutes on the clock.

Morecambe were able to advance down the right flank and a low ball across the face of goal was met by Phillips, who applied enough direction to guide home from close range.

Mansfield instantly sought to restore parity and were almost successful through their first corner of the evening. Stephen McLaughlin’s delivery allowed Cook to nod across to Sweeney, yet the centre-half’s eventual header was the wrong side of the bar.

The Stags were not disheartened by the early strike, and rather seemed buoyed by their own chance, before netting a beautiful equaliser on 26 minutes.

Intricate passing between several amber and blue jerseys began the move as the ball made its way to Gordon. The wing-back needed no invitation before firing into the path of Charsley, whose deft flick saw the ball trickle into the far corner.

Cole Stockton then latched onto a misjudged header via Ryan Sweeney, but his cross carried too much weight and skipped past the onrushing Aaron Wildig.

Coughlan’s side, despite sparse moments for their defensive duties, had largely been in control and continued to press for a second ahead of the half-time whistle.

Gordon was unlucky to see several deliveries meet a Mansfield player amidst their near-monopoly of possession and had to settle for a level contest at the break.

Into the second period and an energetic Mansfield side harried the hosts into serving up a loose pass on the edge of their area, yet McLaughlin was hacked down as he attempted to touch into Cook. The subsequent free-kick was bent around the wall by the No.20 but Turner produced a smart stop.

Similarly, Marek Stech was then required at the opposite end of the field as he thwarted Stockton’s header with a fine, diving save.

Shrimps’ frontman was then left appealing for a penalty that never arrived before Phillips was unable to add to his evening’s tally, curling one above Stech’s target.

Neither side had been able to muster any notable, gilt-edged chances until substitute Tyrese Sinclair was blocked off by Nathaniel Knight-Percival. Corey O’Keeffe whipped an excellent ball into the middle, and while Farrend Rawson found the target via the inside of the post, referee Marc Edwards signalled for a foul somewhere in the build-up.

An identical passage happened minutes later, only Rawson was this time shielded from getting clean contact onto the swinging delivery.

It proved to be the last chance of a battling fixture in Lancashire as Mansfield will return to action with another away trip to Cheltenham on Saturday. 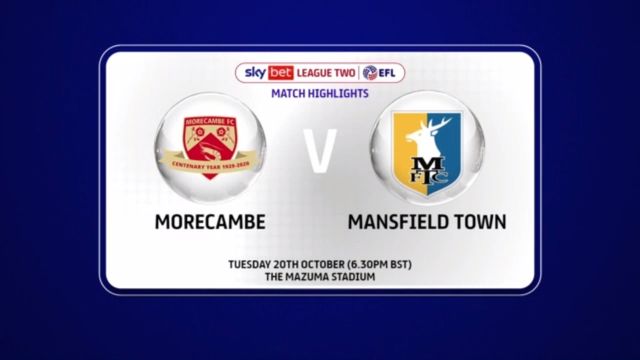 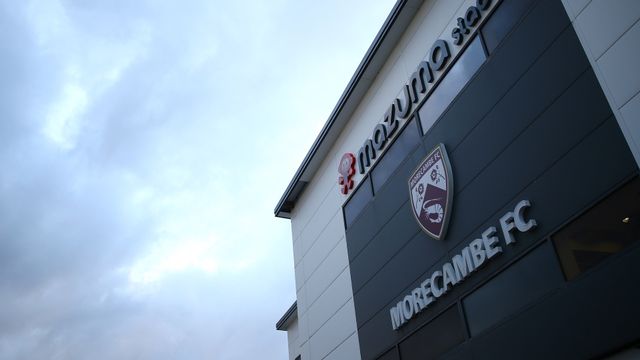