Next up for the Stags is a home match against Walsall on Saturday 31 October (3pm). Here’s all you need to know ahead of the match…

The Stags will be without defender Ryan Sweeney, who tested positive for coronavirus earlier this week. The centre-back is currently undergoing a ten-day self-isolation period.

Wing-back Mal Benning is expected to return from his self-isolation period on Friday, following his positive COVID-19 test. The wing-back is not expected to be fit for Saturday’s fixture.

Fellow defender Corey O’Keeffe is set to report back from his period of self-isolation on Monday.

Midfielder Ollie Clarke, who has been out of action with a calf injury, is reportedly around three weeks away from a return to training.

Mansfield will be without long-term absentee Joe Riley on Saturday, as the defender continues his recovery from an ACL injury.

We last faced the Saddlers in October 2019, a Sky Bet League Two clash at Banks’s Stadium. Goals from Andy Cook and Alex MacDonald secured a 2-1 win for the Stags.

Referee Alan Young will take charge of Saturday’s fixture, assisted by Declan Ford and Robert Atkin. The fourth official will be Lisa Rashid.

Starting with this weekend's match, all season ticket holders' iFollow accounts will be automatically granted access to the live video stream for home league games.

There will be no need to input promo codes and supporters will simply need to log into their iFollow account.

If you already have an iFollow account registered using the same email as the club has for your season ticket account, you do not need to do anything else, simply log into your iFollow account on matchday (from Saturday 31 October).

Mansfield Town battled to a 1-1 draw with Walsall at One Call Stadium after Nicky Maynard’s first goal of the season.

In Richard Cooper’s first game as stand-in Stags' boss, he watched the amber and blue take the lead through Maynard’s instinctual strike on 33 minutes.

Walsall did conjure an equaliser – via Elijah Adebayo squeezing home at the near post in the second period – leaving the spoils to be shared in NG18.

Jamie Reid and George Maris were restored to the starting line-up to replace suspended Aaron O’Driscoll and Rollin Menayese, thus accommodating a switch in formation.

Both sides made a breathless start in Nottinghamshire but despite the amount of tackles and link-up play there proved to be little in the way of goalscoring chances.

Walsall – in particular Wes McDonald – managed to deliver a low ball across the face of goal, yet it carried too much pace for Adebayo.

Maynard then skipped his way between two opposition players before seeing Maris’ weak-foot effort float wide of the target.

However, Mansfield were left to show Marek Stech their gratitude in the 16th minute.

After Farrend Rawson lost his footing on a heavy surface, Emmanuel Osadebe sought to capitalise on a loose ball but the Czech goalkeeper instantly narrowed the angle to thwart the winger with a fine save inside the area.

And the save allowed his side to take the lead just past the half-hour mark.

George Lapslie settled on the edge of the Saddlers’ area as he miscued a volley from a partially-cleared corner. Maynard gambled on the lack of purchase and watched the ball roll kindly towards him before slotting beyond Liam Roberts to break the deadlock.

The intensity continued into the second period and Walsall took just four minutes to restore parity.

McDonald was able to find time to fire a low cross towards Adebayo from the left-hand side, leaving the striker to sweep in at Stech’s near post.

The Stags, though, should have retaken the lead on 67 minutes.

First, Maynard spurned a glorious opportunity from close range as he was unable to sort his feet out before Harry Charsley followed up to force a brilliant, one-handed save by Roberts.

Neither side seemed content with only one point as the contest ebbed and flowed under the floodlights. Mansfield were presented with a chance through Charsley’s delicate pass, but Reid fired his effort against a touch-tight Dan Scarr.

Substitute Liam Kinsella then rifled a powerful drive that was heading for the top corner before Stech produced his second fantastic save of the afternoon, palming to safety.

The Saddlers also rattled the bar in the closing stages. Osadebe volleyed an audacious attempt from 20 yards as it crashed against the woodwork and back into play allowing the hosts to clear.

Mansfield are next in action on Tuesday evening when they travel north to take on Bolton Wanderers in Sky Bet League Two. 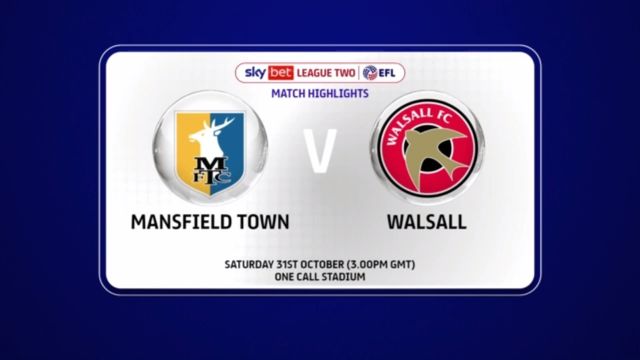