Next up for the Stags is a Sky Bet League Two clash against Stevenage at One Call Stadium on Saturday 10 October (3pm). Here’s all you need to know ahead of the match…

The Stags will be without wing-back Joe Riley, who is currently recovering from an ACL injury suffered in pre-season training.

For the visitors, forward Inih Effiong could miss out.

The Stags head into the game following a spirited performance at Newport County last time out in Sky Bet League Two.

A Stephen McLaughlin thunderbolt saw the amber and blue take a deserved lead, before a Scott Twine goal and controversial Matt Dolan penalty saw the hosts snatch the three points.

Stevenage head into Saturday’s match 16th in the league standings, following one win, one draw and two losses from their opening four fixtures.

We last faced Stevenage at One Call Stadium over a year ago, a 0-0 draw in August 2019.

The Stags were set to face Stevenage away from home in April 2020, before the 2019/20 season was curtailed due to the COVID-19 pandemic.

The referee for Saturday’s match will be Sebastian Stockbridge, assisted by Andrew Aylott and Graeme Fyvie. The fourth official will be Marvyn Amphlett.

Mr. Stockbridge last took charge of a Stags’ fixture in our 3-2 loss against Colchester United in November 2019.

If you are a current season ticket holder and have not received your code, please check your spam or junk folder before contacting our ticket office. The email should have the subject line: ‘iFollow Stags voucher code: Mansfield v Stevenage.’ The email will be sent from mark.stevenson@mansfieldtown.net.

Mansfield Town and Stevenage played out a goalless draw to each take a solitary point from Sky Bet League Two action at One Call Stadium on Saturday afternoon.

Throughout a battling matchup in Nottinghamshire, neither side were able to break the deadlock that lasted the entire duration.

Elliott List struck the woodwork for Boro while both Harry Charsley and George Maris replicated his efforts in either half with only the frame of the goal separating one point from three.

Graham Coughlan named two changes from his side’s trip to Newport as Charsley replaced Ollie Clarke who was suffering with a calf problem, while Marek Stech had recovered from illness to be restored to the starting line-up.

And it was the Stags’ No. 1 who was immediately called into action after Jack Aitchison struck goalwards with his right boot.

Neither side had managed to fully settle into the contest – battling for possession on a wet One Call surface – until proceedings quickly burst into life.

Following an unsuccessful corner, Maris recycled the ball with a hooked delivery towards Farrend Rawson and his subsequent flick-on saw Charsley clatter the upright with a first-time volley.

Mansfield had come agonisingly close but almost let their guard down where the visitors sought to capitalise. Inih Effiong harried Stech into misjudging a backpass from Corey O’Keeffe but the Czech ‘keeper recovered in time to force a goal kick.

Minutes later, though, Stech made amends when he showcased excellent reflexes to parry Effiong’s fierce, close-range strike to safety.

The Stags attempted to play their way through a busy Stevenage backline and as Jamie Reid nor Nicky Maynard were unable to feed an intricate pass, Charsley claimed possession and drilled over from 18 yards.

A battle-hardened first period concluded without a mark on the scoresheet and the second followed in similar fashion.

The visitors were awarded an early corner that fell kindly to Aitchison but the midfielder miscued his attempt.

James Perch, who had been shielding the back three all afternoon, traversed forward and almost broke the deadlock with a rasping strike from distance.

However, the amber and blue still needed to be partially cautious and heeded a big warning on 74 minutes. Alex Revell’s men – specifically Luther James-Wildin – made inroads as he delivered a cross towards List who smacked the crossbar on the stretch.

There proved to be one final, dramatic moment for the Stags when Maris let fly on a bouncing ball but it collided with the underside of the bar and, heartbreakingly for the hosts, back into play.

Mansfield now face a seven-day period without competitive action before they welcome Bradford City to NG18 next Saturday. 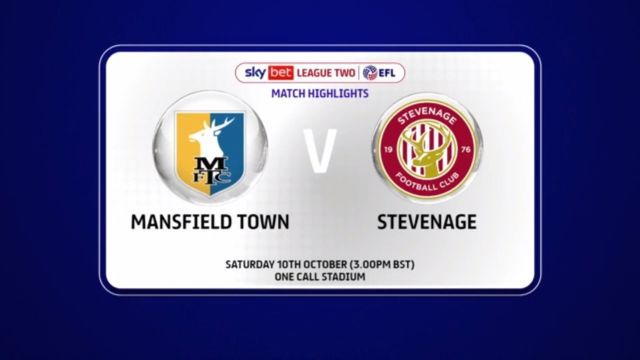 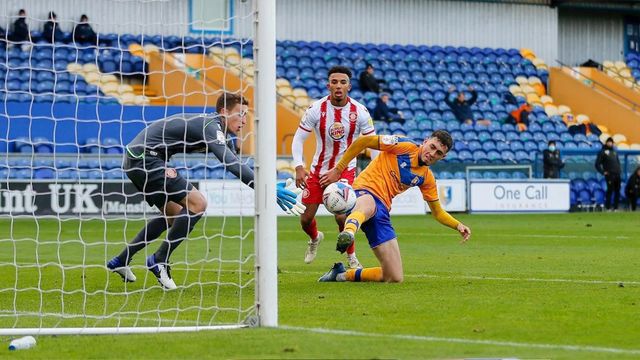