Next up for the Stags is a midweek home fixture against Barrow AFC in Sky Bet League Two. Here’s all you need to know ahead of Tuesday’s 7pm kick-off…

The Stags will be without midfielder Ollie Clarke and wing-back Joe Riley, with the pair missing out due to respective calf and knee injuries.

Wing-backs Mal Benning and Corey O’Keeffe will also miss out, as they continue their self-isolation periods after the former tested positive for COVID-19 last week.

For the visitors, defender Kgosi Ntlhe could miss out.

The Stags will return to One Call Stadium on Tuesday having played their last two matches away from home.

Mansfield drew both of their previous matches, as a 1-1 draw at Morecambe was followed by a 0-0 scoreline away at in-form Cheltenham Town at the weekend.

Tuesday’s visitors have also picked up two points from six in their last couple of fixtures, drawing 3-3 with Bolton Wanderers last Tuesday, before a 2-2 draw with Walsall on Saturday.

We last faced Barrow in league matters on Saturday 06 April 2013, a 4-0 victory for the Stags away from home.

When the Bluebirds last visited One Call Stadium – in February of the same year – Mansfield recorded an unforgettable 8-1 victory.

The referee for Tuesday’s fixture will be Keith Stroud, assisted by Adam Crysell and Robert Merchant. The fourth official will be Nik Barnard.

Mr. Stroud has officiated six games so far this season, with five of those being in the Sky Bet Championship.

He last took charge of a Mansfield fixture in our 2-1 win over Grimsby Town at One Call Stadium in November 2018.

A reminder that season ticket holders are able to watch this game free of charge by using their iFollow Stags promo code, sent by the club via email.

If you are a current season ticket holder and have not received your code, please check your spam or junk folder before contacting our ticket office. The email should have the subject line: ‘iFollow Stags voucher code: Mansfield v Barrow.’ The email will be sent from mark.stevenson@mansfieldtown.net.

If you cannot find this email in your inbox, junk or spam folders, and believe you should have received it, it is imperative that you contact our ticket office as soon as possible. Please email us at ticketoffice@mansfieldtown.net to get in touch.

Mansfield Town fell to a 4-2 defeat against Barrow AFC at One Call Stadium on Tuesday evening.

After Bradley Barry and Patrick Brough fired the visitors into a two-goal lead, James Perch smashed his first Stags goal home to halve the arrears prior to the break.

But with Aaron O’Driscoll’s dismissal reducing the hosts to 10 men on 51 minutes, Barrow capitalised through finishes via Joshua Kay and Harrison Biggins; leaving Harry Charsley’s late goal to be a mere consolation.

Graham Coughlan made two changes from the trip to Cheltenham Town beginning with O’Driscoll deputising for Ryan Sweeney. The latter needed to be excluded as a precaution after displaying COVID-19 symptoms.

Meanwhile, Nicky Maynard was also restored to the starting line-up in place of George Maris.

And the striker had the contest’s first half-chance when he curled over the bar from the edge of Barrow’s area.

However, despite showcasing early intent the Stags fell behind in the 10th minute.

The Bluebirds were able to string together numerous passes before Kay slid across the face of goal for Barry to knock into the net, despite the best efforts of Marek Stech at close range.

An end-to-end affair unfolded at One Call Stadium, both sides finding acres of space, but Barrow were the ones able to capitalise – specifically Brough.

From the left-hand side, Barrow’s man utilised the time and space afforded to him by lashing into the far corner from 25 yards.

The goalscoring, though, showed little sign of easing as Mansfield were able to halve the deficit soon after.

Barrow settled into their defensive shape to thwart a set-piece but goalkeeper Joel Dixon was unable to maintain a grip on Stephen McLaughlin’s delivery and Perch fired into the top of the net with aplomb.

Kellan Gordon then raced beyond Kay as he looked to trigger a rapid counter-attack but was hoisted down and halted in his tracks.

The Stags’ No. 12 was also presented with a brilliant crossing opportunity on the stroke of half-time but Dixon anticipated the ball’s path to intercept ahead of Maynard who lurked.

Maynard was denied a goalscoring chance prior to the interval before deciding to take matters into his own hands thereafter. With few options on the attack, the striker unleashed an effort that was tipped onto the bar by Dixon as it arrowed towards the top corner.

Mansfield seemed buoyed by the effort but had to quickly rethink as O’Driscoll was shown a second yellow card for a late challenge by referee Keith Stroud.

Inevitably, the Bluebirds sought to use their advantage and Kay did just that - receiving possession inside the area and curling beyond Stech for a third.

Barrow were able to find another when Biggins ghosted towards the edge of the 18-yard box, tucking a low, first-time finish into the corner.

The evening’s goals were wrapped up two minutes from time when Gordon burst forward. The wing-back spotted Charsley unmarked and picked out his teammate who slotted home.

Mansfield are next in action on Saturday 31 October as Walsall visit Nottinghamshire. 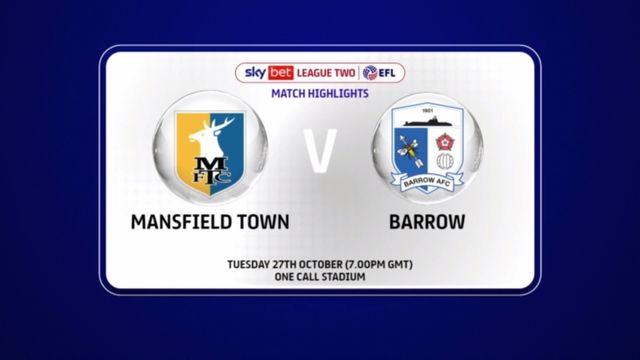 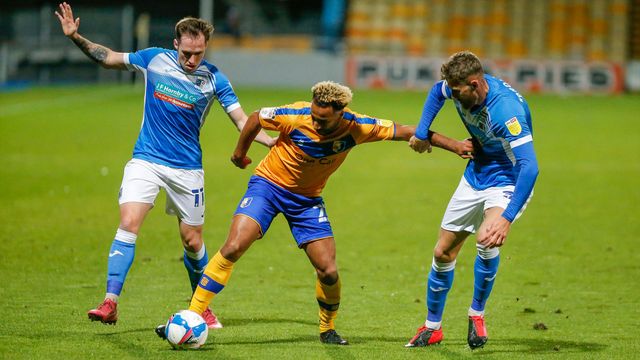