The Stags are back in action on Tuesday evening, when they welcome Sky Bet League Two newcomers Harrogate Town to One Call Stadium for a 7pm kick-off. Here’s all you need to know ahead of the game…

Midfielder George Maris is likely to miss the game, following his absence on Friday evening versus Colchester, due to bruised ribs.

Defender Joe Riley is a long-term absentee and will miss Tuesday’s fixture.

Mansfield made it six games unbeaten in all competitions on Friday evening, following a 1-1 draw against promotion hopefuls Colchester United.

Striker Nicky Maynard opened the scoring with a spectacular effort, but Luke Norris equalised for the U’s late on.

Tuesday’s visitors sit 14th in the Sky Bet League Two standings heading into the match, five points above the Stags.

After an exceptional start to the campaign following promotion from the National League last season, Harrogate’s form has dipped somewhat. Simon Weaver’s side will be looking to get back to winning ways after a 3-0 defeat to Leyton Orient at the weekend.

The referee for Tuesday’s match will be Carl Boyeson, assisted by Gareth Viccars and Antony Da Costa. The fourth official will be Gareth Mellor.

Mr. Boyeson last took charge of a Mansfield fixture in our 2-0 win away at Carlisle United in August 2019.

Calvin Miller turned home minutes before the half-hour mark and the visitors were not required to strike a second time at One Call Stadium.

Despite Mansfield’s tireless efforts, they were unable to find pockets of space within a deep block that ultimately sealed maximum points for the North Yorkshire outfit in their first-ever competitive meeting.

Nigel Clough named an unchanged starting line-up and substitutes’ bench as his side looked to continue their unbeaten streak that was extended against Colchester United on Friday.

Nicky Maynard provided the breakthrough only four days prior and looked to replicate the feat against Harrogate, before curling high and wide of James Belshaw’s target.

The Sulphurites established a foothold with immediate effect – knocking together a string of successive passes that ended with Dan Jones blasting into the North Stand. Lloyd Kerry also took aim from distance but his effort met the grasp of Marek Stech.

Mansfield themselves responded with a spell of possession in an attempt to break the deadlock.

First, Kellan Gordon’s low ball across the face of goal had to be hooked outwards by Warren Burrell to prevent an amber touch, before Harry Charsley’s strike was leapt onto by Belshaw at the near post.

Harrogate rode their defensive luck and subsequently pounced at the opposite end.

On 27 minutes, Jack Muldoon won a physical battle with Stephen McLaughlin to drive and deliver a dangerous, fizzed cross that was turned home from close range by Miller.

An immediate response then looked to have surfaced. George Lapslie awaited a knock-down inside the penalty area but the shot was blocked at source.

And towards closure of the first period, Jordan Bowery surged forward from centre circle to the byline yet couldn’t steer his eventual cross towards a teammate.

The second-half tempo matched its predecessor with Mansfield searching for an equaliser. Skipper Ollie Clarke lined up a rasping drive at the outset but it took a deflection, which carried it above the bar.

Harrogate then broke through Jones down the left flank and his cross led to Mark Beck’s first touch setting himself up for a header that, somehow, was nodded wide from less than three yards.

The Stags were still searching for openings before Maynard was presented with his side’s best chance. Meeting Gordon’s cross while somewhat unsighted, the No. 22 flicked his own attempt wide with his forehead.

Clough’s men gradually forced the visitors further and further back as the clock ticked towards full-time but were met by consistent block.

McLaughlin watched the ball fall kindly to him inside the 18-yard box but was unable to direct beyond a crowd of bodies.

The Stags will hope to bounce back in five days’ time when they take on Dagenham & Redbridge in their Emirates FA Cup Second Round tie. 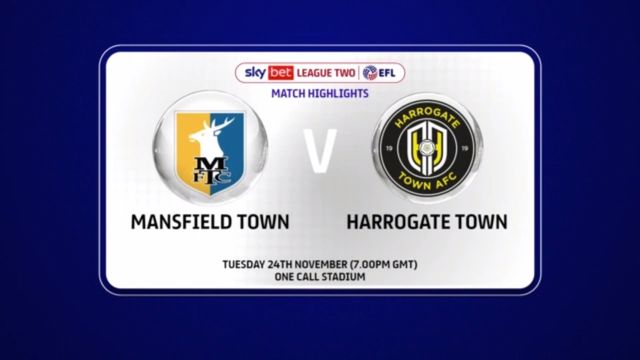 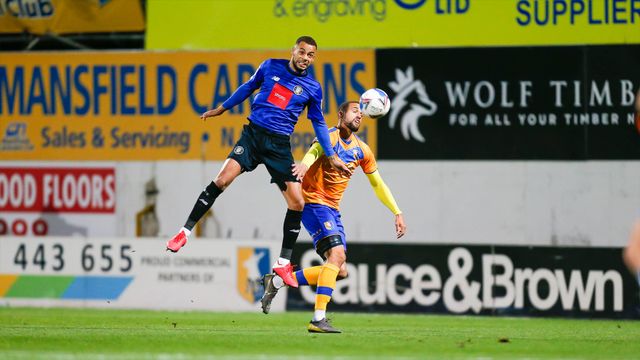