Next up for the Stags is a Friday night home match against Colchester United in Sky Bet League Two (7pm). Here’s all you need to know ahead of the match…

Midfielder George Maris is likely to miss the game, following his rib injury suffered in Saturday’s match away at Forest Green Rovers.

Long-term absentee Joe Riley is continuing his recovery from an ACL injury and will therefore miss Friday’s fixture.

For the U’s, Callum Harriott will miss out, while Tom Lapslie and Ben Stevenson are doubts.

The Stags made it three consecutive away wins on Saturday with their 2-1 win at Forest Green, stretching their unbeaten run to five matches.

Colchester sit seventh in the league standings heading into Friday’s match, following a strong start to their campaign. Last time out, they recorded a 2-1 win at home to Leyton Orient on Saturday.

We last faced the U’s in November 2019, and although defender Ryan Sweeney and attacking midfielder Omari Sterling-James found themselves on the scoresheet, the Stags succumbed to a 3-2 home loss.

Referee Benjamin Speedie will take charge of Friday’s fixture, assisted by Conor Brown and Ravel Cheosiaua. The fourth official will be Abbas Khan.

This will be the first competitive fixture involving the Stags that Mr. Speedie will take charge of.

Neither side were able to be split throughout a first-half that had spells of dominance change hands several times.

However, when Maynard’s thunderous effort from distance looked to potentially seal a fourth-successive victory, substitute Luke Norris was on hand to rescue a point for the travelling outfit.

Nigel Clough’s squad was bolstered by the return of club captain Ollie Clarke, who started his first match since injury, in place of George Maris – the No. 10 being ruled out due to a rib injury.

Mansfield entered the contest by attempting to sharply ascend through the thirds and found particular joy down both flanks.

Initially, Kellan Gordon’s first-time delivery narrowly evaded Jordan Bowery in the centre before Mal Benning’s deflected cross was then hammered into the body of Harry Pell by Clarke.

The visitors themselves were seeking a route to goal but continually squandered possession allowing the Stags to break. Another delivery from a wide position followed, this time via Bowery’s boot, yet Dean Gerken fell onto the ball ahead of any Mansfield touch.

It proved to be an open, ball-on-the-ground type affair with the U’s slowly gaining a foothold.

Noah Chilvers was the quickest to respond to a hoisted cross into the Stags’ 18-yard box and should have capitalised with the opening goal; however, his nod down was easily claimed by Marek Stech after connecting with the turf.

Soon after, Pell was stationed in the perfect position to let fly from a loose corner ball but his strike was thwarted by Farrend Rawson.

And it was Clarke’s turn to drive from range as the clock shifted towards the interval. A neat touch by Stephen McLaughlin fell into the returning midfielder’s path and his punt was hesitantly beaten clear by Gerken.

Clough’s men emerged from the dressing room with same amount of vigour as they attempted to make their mark in the second period.

George Lapslie hooked a ball above the head of everyone and into McLaughlin’s path – who had beaten the U’s high line – but a wayward first touch allowed the visitors to regroup.

Minutes later, though, the Stags were on the front foot yet again with Harry Charsley looping an effort the wrong side of the upright.

And their persistence paid off in the 67th minute.

Maynard was fed possession on the right-hand side and needed no invitation to release a powerful effort that caught the underside of the bar before bouncing over the line.

Colchester attempted to utilise the remaining time to level proceedings and were successful through substitute Norris.

The striker spotted Stech beyond his goal line as the No. 1 looked to reduce the angle and clipped an inch-perfect lob into the empty net.

It proved to be the last notable action of Friday evening, signalling one point apiece from the Stags’ latest Sky Bet League Two contest.

They are back in league action on Tuesday evening as Harrogate Town are the visitors to One Call Stadium. 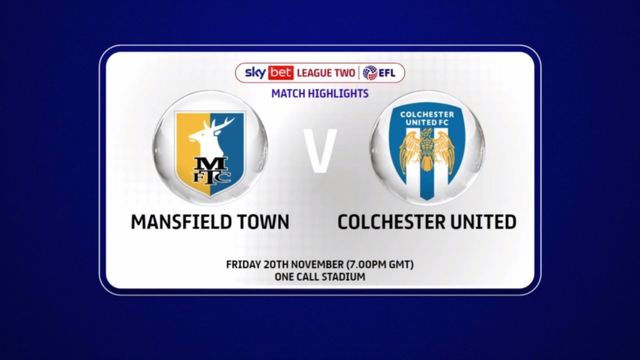 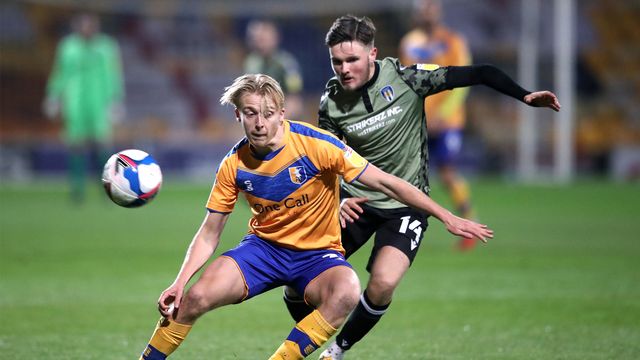