The Stags are back on the road this weekend as they travel to face Forest Green Rovers at the innocent New Lawn Stadium (3pm). Here’s all you need to know ahead of the match…

Mansfield will be without wing-back Joe Riley as the defender continues his recovery from a long-term knee injury.

Mark Cooper’s Forest Green have a clean bill of health heading into the fixture.

Mansfield made it two wins on the bounce on Tuesday, as they followed up their outstanding 1-0 win away at Sunderland in the Emirates FA Cup with a 2-1 victory over Scunthorpe United in the Papa John’s Trophy.

Tuesday night’s win made it four games unbeaten for the Stags.

We last faced Forest Green at One Call Stadium in January 2020, an afternoon that turned out to be one to forget for the Stags, as they lost 4-3.

The Stags earned a point from their last trip to Forest Green, as an Andy Cook brace sealed a dramatic comeback from two goals down.

The referee for Saturday’s match will be Brett Huxtable, assisted by Adrian Turner and Louis Marks. The fourth official will be Adam Ricketts.

Mr. Huxtable last took charge of a Mansfield fixture in January 2019, our dramatic 3-2 comeback victory over Colchester United away from home.

Lapslie, who already had three goal involvements prior to Saturday’s outing, wasted little time in adding another to his tally when he beat Luke McGee at the second attempt early in the contest.

And despite Odin Bailey’s 85th-minute goal seeking to trigger a dramatic comeback, Charsley’s first-half strike proved to be the match-winner under heavy rain at the innocent New Lawn Stadium.

Nigel Clough watched his side emerge victorious at Scunthorpe United on Tuesday but opted for wholesale changes to his line-up.

The entire XI who battled towards an historic victory over Sunderland were restored to the fray and it happened to pay dividends inside five minutes.

Stephen McLaughlin triggered the first notable press of the match and forced Udoka Godwin-Malife into squandering possession in the right channel, allowing the winger to burst forward. Lapslie patiently awaited the delivery before smashing past Luke McGee despite the goalkeeper’s initial save.

Mansfield grew in confidence and continued to pressure the opposition into mistakes – the goalscorer this time seeking to turn provider for Nicky Maynard whose effort lacked purchase.

Rovers, though, still posed a danger as Bailey ran clear but the forward was denied after a smart stop by Marek Stech.

George Maris then duelled in centre-field to retake the ball but was left down injured and was replaced by Ollie Clarke, who returned for his first piece of league action in six weeks.

And within minutes the Stags doubled their lead.

Jordan Bowery found himself in an ideal position to profit from a loose Rovers free-kick and the No. 9 shifted the ball across to Charsley who drilled into the far corner with precision.

Stags’ Czech custodian was then required at either side of the break to maintain his clean sheet. First, Jamille Matt’s rising drive stung the palms of Stech before Jake Young had a similar effort claimed.

Rovers found themselves in a sustained period of attack, yet were unable to muster any gilt-edged opportunities before Maynard almost pounced for a third.

McGee mishandled – and ultimately dropped – the ball from a hanging cross in heavy rain but Maynard had little room to manoeuvre a strike that led to the danger being extinguished.
The experienced striker did manage to find the back of the net just minutes later; however, his header was ruled offside by the nearside assistant.

Mark Cooper’s men were still probing the Mansfield back-line and managed to halve the deficit on 85 minutes, as Nicky Cadden’s corner produced a goalmouth scramble whereby Bailey was able to tuck away.

Expectedly, Rovers launched a colossal attempt for a last-gasp equaliser but it never reared its head to give the Stags maximum points in Gloucestershire.

Mansfield now have six days to prepare for their next Sky Bet League Two fixture as Clough takes charge of his first One Call Stadium fixture against Colchester United. 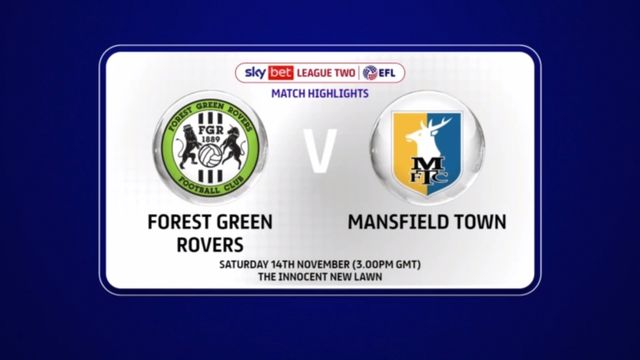 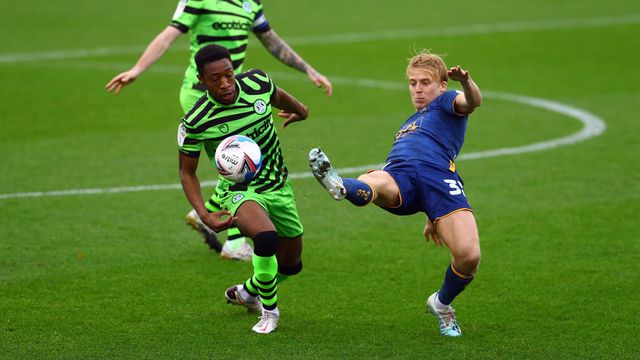