Next up for the Stags is a trip to face Bolton Wanderers on Tuesday evening for a 7pm kick-off. Here’s all you need to know ahead of the clash…

Wing-backs Mal Benning and Corey O’Keeffe will continue to be assessed in the run-up to the fixture after returning from their self-isolation periods.

The Stags will be without defender Ryan Sweeney after the centre-back tested positive for COVID-19 last week.

Midfielder Ollie Clarke and wing-back Joe Riley will also be absent, as the duo continue their recoveries from respective calf and knee injuries.

Frontman Nicky Maynard found the net in a hard-fought 1-1 draw with Walsall at One Call Stadium.

It was a day to forget for Bolton on Saturday, as they fell to a 4-0 defeat away at Leyton Orient.

Tuesday’s fixture will be the first competitive meeting between the Stags and Bolton since April 1993, a 1-1 draw in English football’s third tier.

The referee for Tuesday’s game will be Andy Haines, assisted by Matthew Smith and Joe Simpson. The fourth official will be Richard Bartlett.

Mr. Haines last took charge of a Mansfield fixture in our 2-0 defeat away to Sky Bet League One side Shrewsbury Town in last season’s Emirates FA Cup.

George Lapslie’s first Mansfield Town goal proved indecisive as the Stags had to settle for a 1-1 draw with Bolton Wanderers on Tuesday evening.

The midfielder – on loan from Sky Bet League One side Charlton Athletic – broke the deadlock after meeting Stephen McLaughlin’s delivery at the near post to flick home with his head.

Although, Bolton were able to muster an equaliser in the 90th minute through Antoni Sarcevic to rescue a point for the home side.

Corey O’Keeffe and Mal Benning returned to the Stags’ matchday squad after their necessary self-isolation period as the latter replaced Jamie Reid in the starting line-up.

Jordan Bowery was also restored to the XI with Andy Cook dropping to the substitutes’ bench.

Under the floodlights in Greater Manchester, Ali Crawford posed the biggest threat for the hosts in the early exchanges. The forward whipped an effort the wrong side of Marek Stech’s upright before firing a first-time punt above the bar minutes thereafter.

Mansfield quickly livened up and almost capitalised upon a Wanderers misjudgement.

Billy Crellin opted to claim McLaughlin’s corner early, yet failed, and Nicky Maynard ran onto the loose ball only to be met by a reactionary stop from Bolton’s custodian.

And on the half-hour mark, the Stags could have so easily snatched the lead.

Harry Charsley took once glance over his shoulder, spotting Bowery and placing a delightful cross at his feet. The No. 9 fended against Alex Baptiste to make room for a shot, but Crellin was again on hand to deny the amber and blue.

The visitors were able to string together several crisp passes to advance up the field with the half drawing to a close. Maynard, Harry Charsley then Kellan Gordon linked up as the latter curled an effort ultimately wide of the mark.

Richard Cooper’s men were building momentum towards the half-time whistle. More positive build-up play almost led to a glorious chance had it not been for Bowery’s slightly over hit ball for Gordon.

Into the second period and it was more of the same from Mansfield. This time Bowery and George Maris were the suspects in a free-flowing move where the midfielder could only connect the side netting with his strike.

Benning was then denied by the fingertips of Crellin – but it was only delaying the breakthrough.

McLaughlin produced another excellent delivery from the corner flag and this time it was lofted perfectly into the path of Lapslie, whose glance beyond the goalkeeper landed in the far corner.

Bolton sought to impose themselves on a second half that the away side predominantly controlled; however, they were often met with a resolute back-line to snuff out any potential danger.

But on the stroke of injury time, Sarcevic found a pocket of space in dangerous territory.

A scooped ball over the top was met by the onrushing Wanderers skipper, and with little hesitation he was able to find the back of the net above Stech.

Mansfield instantly pressed for a late winner amongst a frenetic closing period, yet it would not arrive and it would mean the spoils were shared at the University of Bolton Stadium.

The Stags’ next venture arrives on Saturday as they travel to Sunderland for an Emirates FA Cup First Round tie. 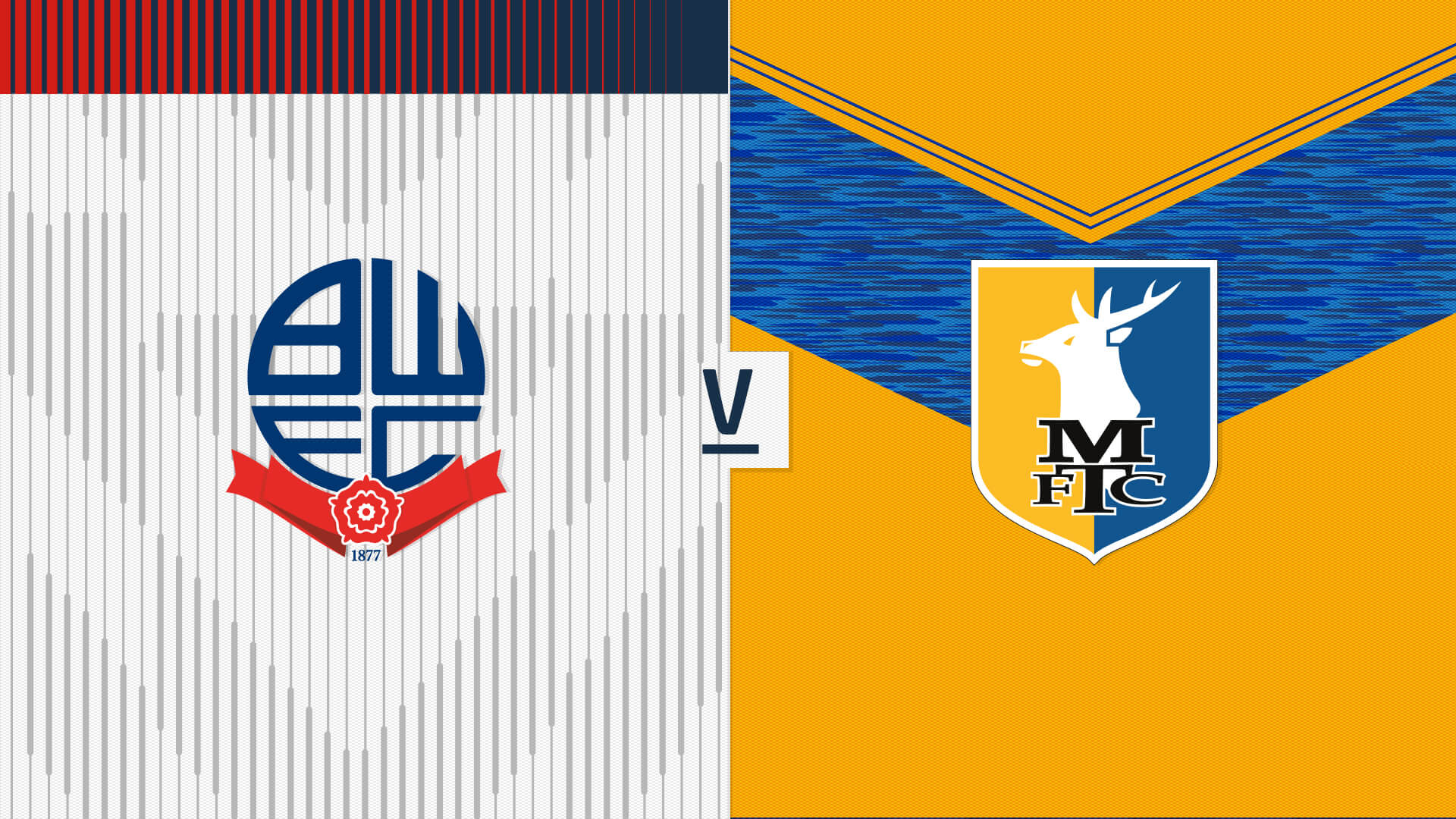 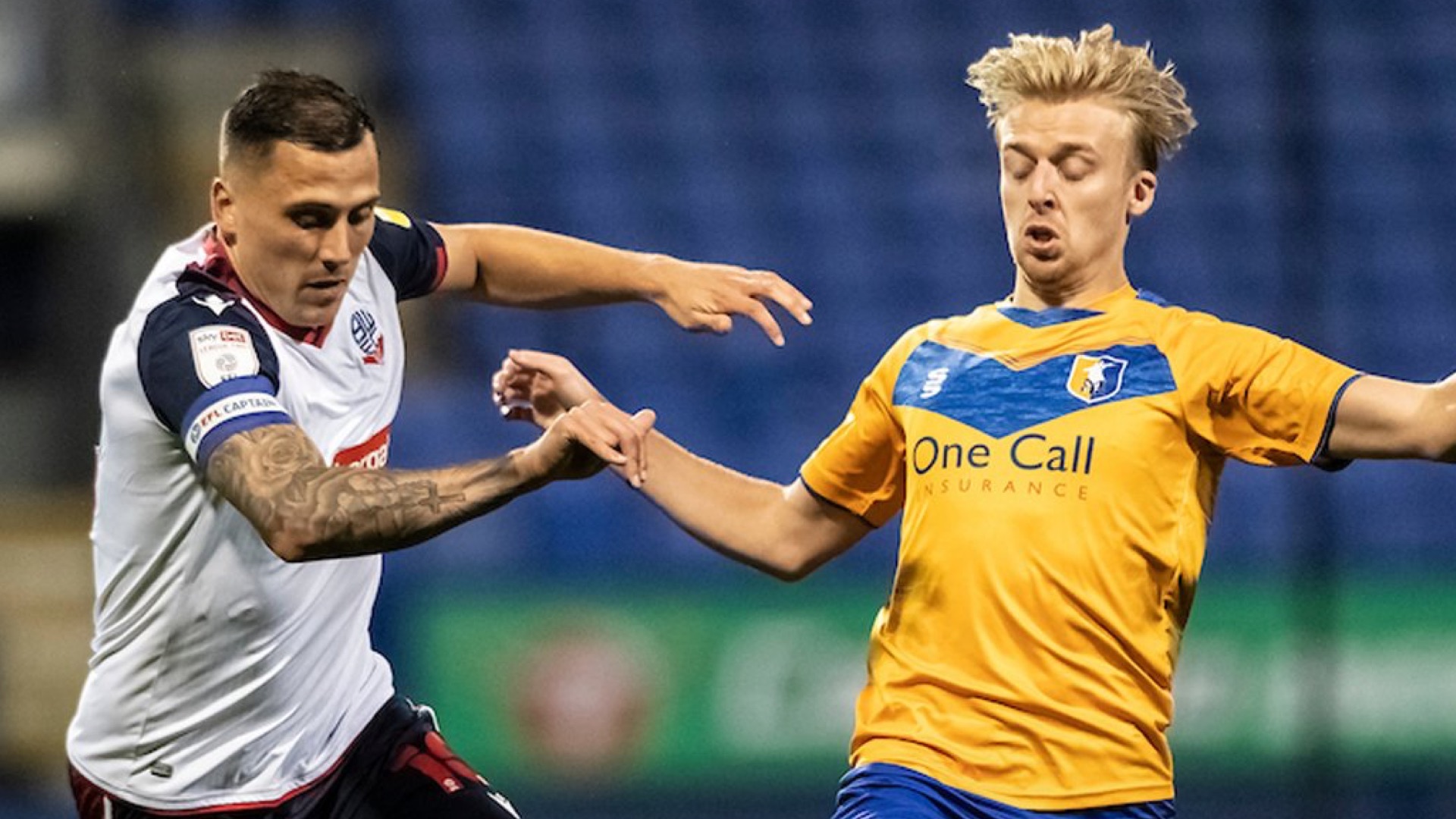 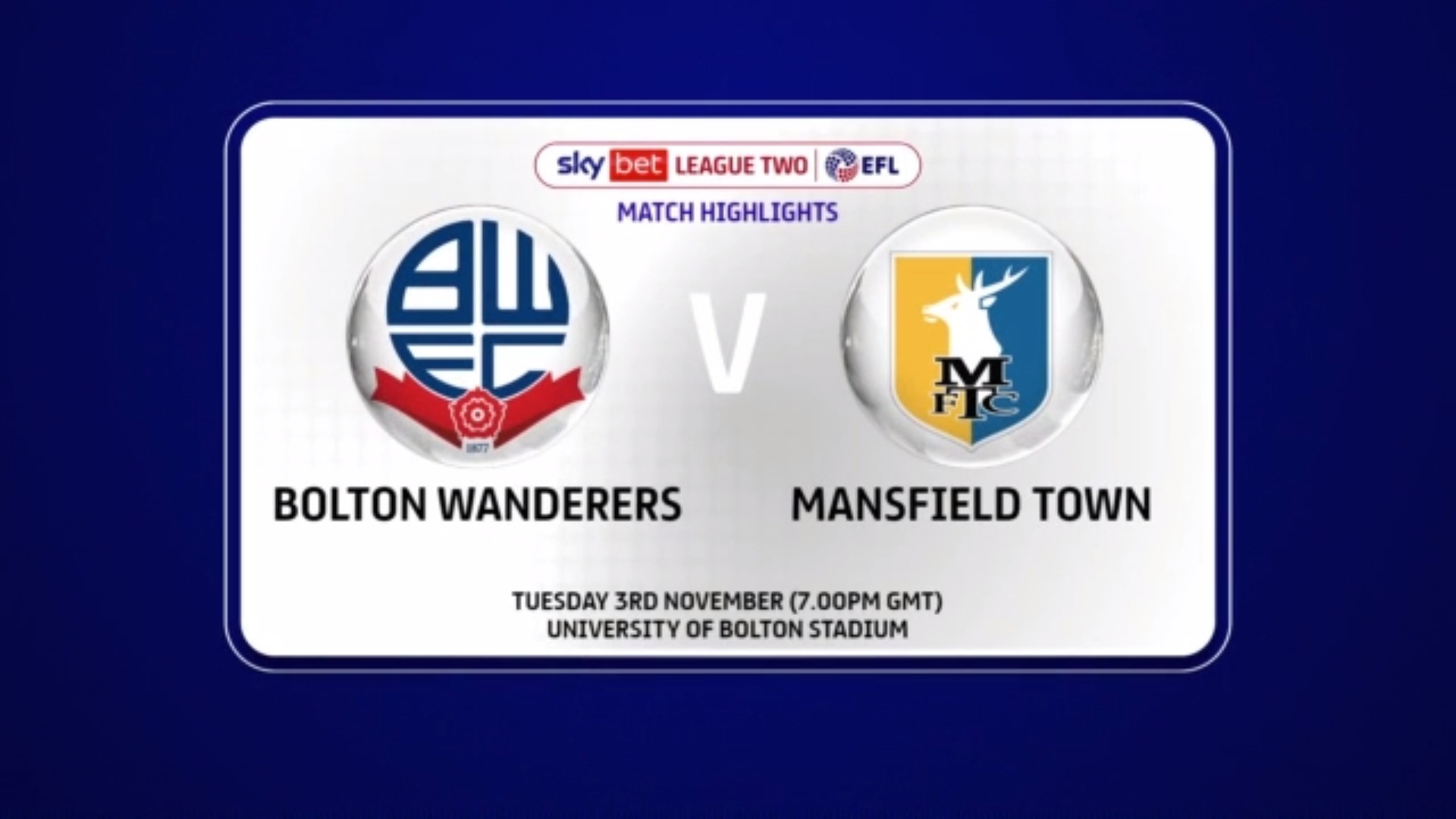