Next up for the Stags is a trip to face Port Vale for the final game of the season on Saturday 08 May (3pm). Here’s all you need to know ahead of the match…

Skipper Ollie Clarke may be in contention to feature in the game and will be assessed throughout the week.

Defender Farrend Rawson is unlikely to feature after the concussion he suffered in the recent match at Salford City.

The Stags have put together a strong conclusion to their season, winning three of their last four matches in Sky Bet League Two.

Last time out, they recorded a resounding 4-1 win over Oldham Athletic at One Call Stadium.

Port Vale sit five points above the Stags in the league standings, winning three, drawing one and losing one of their last five matches.

Mansfield recorded their biggest win of the season against Port Vale the last time the two sides met, a 4-0 victory at One Call Stadium.

The referee for Saturday’s game will be Sam Allison, assisted by Grant Taylor and John Flynn.

The fourth official will be Kevin Morris.

Mansfield Town ended the season on a high with a fantastic 3-0 win away at Port Vale on Saturday afternoon.

Stephen McLaughlin opened the scoring in the ninth minute with a smartly drilled finish through a crowd of Vale defenders and into the bottom corner of the net.

The lead was then doubled by Stephen Quinn who finished off George Lapslie’s fantastic run down the right-hand side with aplomb.

McLaughlin added his second with a sweet free-kick just after the hour mark to secure the Stags’ biggest away win of the season.

Port Vale were uninspiring throughout, only showing attacking edge in the final minutes of the first period when Alex Hurst fired a fierce shot against the crossbar.

Stags' boss Nigel Clough has made four changes to the side that beat Oldham for Saturday afternoon's final game of the season against Port Vale.

The game began slowly, with both sides getting a feel for the difficult, rainy conditions at Vale Park.

However, things burst into life from the seventh minute when Stags’ right-back Clarke was dragged down in the penalty area, but the referee Sam Allison wasn’t interested.

Mansfield’s frustrations didn’t last long as they took the lead just two minutes later through McLaughlin who found an extra yard on the edge of the box and fired a low shot across the penalty area and into the far corner of Scott Brown’s net.

The Stags could have doubled their lead within another four minutes as Bowery rocketed a shot against the same post McLaughlin’s shot had gone inside of.

Vale looked uncoordinated in defence and uninspiring in attack in the first 25 minutes and Mansfield continued to lay siege upon Brown and his defence; Bowery coming close yet again only to be denied by a fantastic right-footed save from the Vale goalkeeper.

The pressure was eventually rewarded as Mansfield claimed their second goal just before the half-hour mark. Lapslie intercepted a loose pass inside his own half before sprinting to the byline and clipping it back to Quinn who only had to apply the simplest of finishes to claim his second goal of the season.

With just under ten first-half minutes left to play, Vale finally ventured forwards to test the Mansfield defence. However, they couldn’t find a way through as the Stags’ defence remained valiant with both McLaughlin and Ryan Sweeney clearing the ball off the line in the space of a few seconds.

With almost the last kick of the half, Vale registered their best chance of the game as Hurst rocketed a shot against the crossbar from 30 yards before Harry McKirdy fired wide and the Stags went into halftime well in control.

The second half began just as slowly as the first and took a lot longer to burst into life but burst into life it did and again it was a McLaughlin goal that caused it. The Irish left-back grabbed his brace with a fantastic free kick from 25 yards out that left Brown with no chance just past the hour mark to put the result beyond doubt.

Moment later, McLaughlin tried his luck from another dead ball situation, this time a free kick from 30 yards which went directly towards the other corner, forcing Brown into a smart save down to his near right-hand post.

The Stags were reduced to just free kicks throughout this period of the game while their hosts again returned to their attackingly uninspired selves from the first half. Sinclair had the next dead ball chance when his audacious effort from a tight angle rebounded back off the inside of the post and across the face of goal before being cleared away by Vale.

Jason Law was denied late on by another fantastic Brown save and that proved to be the last action of the game as the Stags secured a thrilling victory to round off the 2020/21 Sky Bet League Two season. 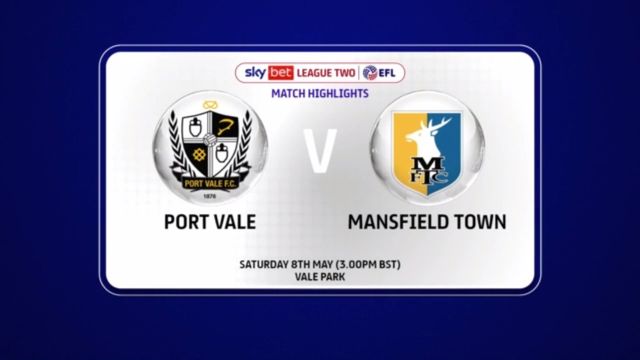 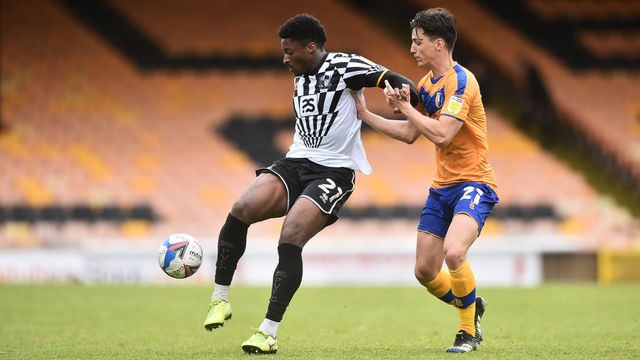