01 May 2021 Venue One Call Stadium Attendance

The Stags will play their final home game of the 2020/21 season on Saturday, when they welcome Oldham Athletic to One Call Stadium for a 3pm kick-off. Here’s all you need to know ahead of the game…

Skipper Ollie Clarke, who missed out on Saturday’s match away at Salford, is a doubt with an ankle injury.

Defender Farrend Rawson will miss the game due to the head injury he received during Saturday’s game at the Peninsula Stadium.

The Latics will be without goalkeeper Ian Lawlor, with Bobby Grant, Serhat Tasdemir, Raphael Diarra and Sido Jombati all doubts for the game.

Stags’ four-game unbeaten run came to an end at the weekend, courtesy of a 2-0 defeat away at Salford City.

Before Saturday’s loss, the Stags had won two and drawn two of their previous four matches in the league.

The Latics sit two points and two places above Mansfield in the table heading into the game, making them also mathematically safe from relegation this season.

Oldham have won three of their last five matches in the league, but suffered a disappointing defeat against Grimsby Town last time out.

We last faced Oldham in January, a 3-2 win for the Stags at Boundary Park.

Midfielder Harry Charsley, defender Ryan Sweeney and forward Jamie Reid were all on the scoresheet for the amber and blue, who made it four successive league victories with the win.

The referee for Saturday’s game will be Antony Coggins, assisted by Thomas Harty and Robert Atkin.

The fourth official will be Darren Wilding.

The club will not be covering this game on social media. From 3pm on Friday 30 April to 11:59pm on Monday 03 May, the Stags – alongside other clubs – will be partaking in a social media boycott, in response to ongoing online discriminatory abuse towards players and others involved with football.

Mansfield Town secured a convincing victory in their last home game of the 2020/21 season against Oldham Athletic on Saturday afternoon.

Tyrese Sinclair gave the Stags a deserved early lead with a composed finish after good link-up play between George Maris and Jamie Reid.

Minutes into the second period, Oldham were gifted a goal as Ryan Sweeney and Aidan Stone miscommunicated and Zak Dearnley finished off the chance with open arms.

The two-goal lead was re-established in the 80th minute as Lapslie grabbed his second goal of the afternoon- another simple, close-range finish.

Jamie Reid netted the fourth goal in the 87th minute after the ball rebounded to him, 12 yards from goal, leaving him a simple finish into an all but open net.

Boss Nigel Clough made three changes to the side that faced Salford City for today's final home match of the season against Oldham Athletic.

Keaton Ward started in midfield ahead of Jason Law and Reid came into the side in place of Jordan Bowery.

Defender Jake Wright returned to the squad among the substitutes for today's fixture.

Mansfield came into this one with a full week’s preparation and started sharply through Tyrese Sinclair who had two chances in the opening four minutes, both of which went wide of the mark.

The rest of the opening ten minutes showcased thrilling end-to-end football, with the Stags creating the best chance so far when George Lapslie met Reid’s headed pass however, he was too off-balance to muster any power to trouble Lawrie Walker in the Oldham net.

This quick Stags' start was rewarded early on when Sinclair took his chance to claim his third goal in as many home games. Maris fed the ball to Reid who held it up nicely before threading Sinclair through and the 20-year-old slotted the ball home with composure far beyond his years in the 12th minute.

Meanwhile, Oldham were yet to cause Mansfield any trouble, despite the end-to-end football they had partaken in earlier. The opening 20 minutes set the scene and it was set to be a long afternoon for the visitors who mustered one dragged shot at goal from Conor McAleny after Dearnley took a heavy touch and wasted his one-on-one chance.

Sinclair’s eyes were on the prize once again as the cracks began to appear in the Oldham defence. He received the ball on the edge of the box – surrounded by Oldham defenders in their black and gold strip – and aimed a curling effort at the far top corner which flew narrowly over the mark.

Sinclair was involved in another Mansfield chance not long after this. His gut-busting dash ensured the ball was kept in play for a Stags’ counter-attack, he continued down the right channel and played a perfectly weighted pass around Cameron Borthwick-Jackson to the feet of Keaton Ward. Ward, another academy graduate, then delivered a perfect ball that travelled along the edge of the six-yard box and out the other side without the touch it was begging for.

The Stags still had all the chances without reply as the game ticked towards the 35th minute. The next one came from a corner which Stephen Quinn flicked on to Lapslie who again couldn’t muster enough power to trouble Walker.

Lapslie was not going to let another chance go begging as he bagged his goal just three minutes later. The ball was drilled through a parliament of Oldham defenders by McLaughlin straight to the feet of Lapslie who diverted the ball home from nine yards.

The second period began in catastrophic fashion for the Stags as Sweeney began shielding the ball out of play, under pressure from Dearnley. There seemed to be mixed messages as Stone dove at the feet of his centre-back only for the ball to squeeze away from them and trickle towards an open goal for Dearnley to stroke home from less than a yard in the 51st minute.

Reid had the next good chance to reinstate the Stags’ two-goal cushion after Quinn made a quick break forward from midfield and fed his striker the ball, but Reid couldn’t find the finish as the MK Dons loanee Walker made himself big.

Oldham finally carved a chance for themselves in the 80th minute when right-back Harry Clarke met a corner kick with a completely free header. However, it proved surprisingly misguided as it sailed high and wide of Stone’s goal.

After this let off the Stags punished their opposition as Lapslie added his second and Mansfield’s third as he swept Maris’ low cross through the legs of Walker from six yards.

The result was put beyond doubt as Reid secured the Stags’ fourth. Substitute James Clarke did well to cut in from the right-wing and fire a low shot which was saved by the legs of Walker, only for the ball to fall to Reid who had a simple finish with the goalkeeper in no man’s land.

Having secured their second-biggest win of the season, the Stags will now look to take that confidence into their final game of the season away at Port Vale next Saturday afternoon. 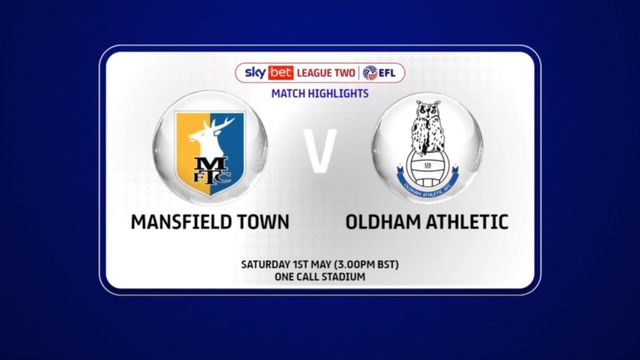 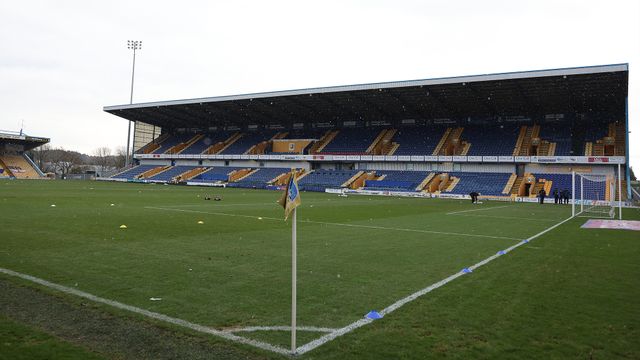