Next up for the Stags is a trip to face Tranmere Rovers on Saturday 27 March (3pm). Here’s all you need to know ahead of the clash…

The Stags will be without forward Oli Sarkic for the clash (hamstring).

Right-back Joe Riley is a long-term absentee, and midfielder George Lapslie will be assessed in the days leading up to the game.

The Stags made it four home games unbeaten on Tuesday with a 0-0 draw against Forest Green Rovers, a game more exciting than the scoreline suggests.

Saturday’s hosts are unbeaten in their last four games and sit fourth in the Sky Bet League Two table heading into the clash.

We last faced Tranmere on the opening day of the Sky Bet League Two season.

The game was played at a good tempo at One Call Stadium, but finished goalless.

The referee for Saturday’s game will be Will Finnie, assisted by Robert Atkin and Kevin Morris.

The fourth official will be Matthew Parry.

A Stephen Quinn stunner earned Mansfield Town a point away at Tranmere Rovers on Saturday afternoon.

The deadlock was broken just before half-time when Kaiyne Woolery’s driven shot sped past Aidan Stone in the Mansfield net.

The Stags equalised with 76 minutes on the clock when Quinn’s stunning volley found the far corner of the Rovers’ net, his first goal for the club.

Both sides pushed for all three points until the very end of the game but neither could make the net bulge for a second time.

There was one change on the bench, as midfielder George Lapslie replaces Jake Wright.

The game began with little to speak of in terms of chances, however it took an unfortunate turn in the 13th minute when the Tranmere goalkeeper and captain Scott Davies appeared to land awkwardly and had to be stretchered off as a result.

Once play resumed, both sides had their best chances as Rovers forward Paul Lewis’ header went just wide of the post and Jamie Reid’s shot at the opposite end met the same fate.

The home side almost took the lead in the 20th minute as a header from Peter Clarke shaved the same post Lewis’ header had fallen the wrong side of moments earlier.

This proved to be the last good chance for almost 20 minutes as the game fell into a lull. Jason Law’s shot from 12 yards was blocked by Jay Spearing in the 38th minute while Tranmere continued to have luck winning headers in the Mansfield box and went close through Clarke who saw his effort narrowly miss the target again.

Despite a solid performance so far, the Stags could not see out the half as Rovers took the lead moments before half-time. Kellan Gordon was forced inside to make a clearance, leaving Woolery unmarked, but the ball fell back to Woolery who smashed home from 15 yards before Gordon could get back into position.

The home side almost doubled their lead within four second-half minutes when Stone’s hurried clearance fell to Liam Feeney who took one touch and fired a shot at goal from 45 yards which, fortunately for Stone, went just wide of his right-hand post.

After another lull in tempo, the Stags had their best chance of the game  when Ollie Clarke put Reid through on goal on the hour mark but, under pressure, he couldn’t keep his shot on target and it trickled across the face of goal and out for a goal kick.

Mansfield were the stronger side for the next 15 minutes and had a strong call for a penalty when Quinn’s half volley from 15 yards appeared to strike the arm of Otis Khan.

Just moments later, Quinn found the leveller, volleying beautifully past the substitute goalkeeper Joe Murphy to mark his first goal for the club since joining on loan from Burton Albion.

The game opened up for the final 14 minutes as both teams found a higher gear. Tranmere had a good chance to immediately regain their lead, but Lewis’ volley was caught by the safe hands of Stone.

The tempo never dropped until the final whistle as both sides pushed to claim all three points but neither could make a chance count and the spoils were shared.

The Stags’ next game sees them host Leyton Orient on Friday 02 April. 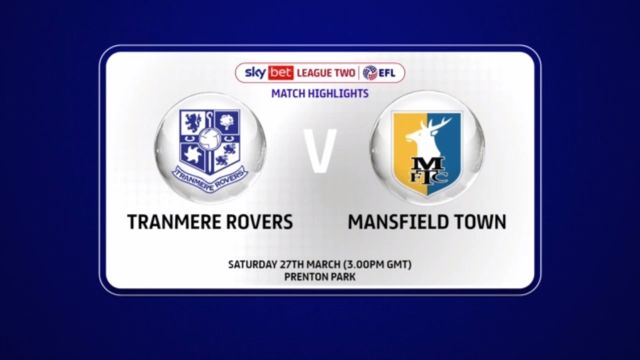 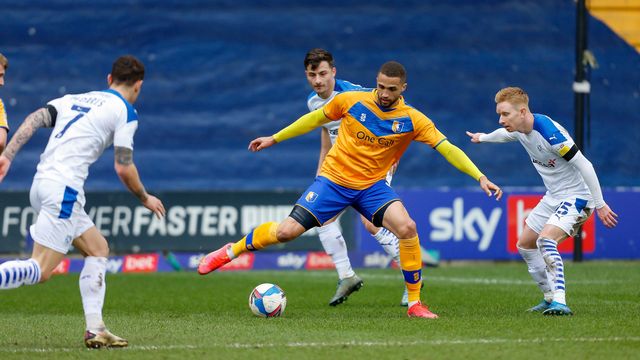