Next up for the Stags is a visit from Forest Green Rovers on Tuesday 23 March (6pm). Here’s all you need to know ahead of the Sky Bet League Two clash…

Forward Oli Sarkic will be sidelined for approximately three to four weeks with a hamstring iinjury.

Midfielders George Lapslie and Ollie Clarke will need to be assessed ahead of Tuesday's clash to determine whether they are included in the matchday squad.

Wing-back Joe Riley is a long-term absentee and will miss out.

Forest Green will be without Ebou Adams for the match.

The Stags have drawn their last two fixtures, against Carlisle United and Grimsby Town, respectively.

Despite suffering defeat to Cambridge on Saturday, Tuesday's visitors still remain third in Sky Bet League Two, with games in hand on the teams above them.

Boss Nigel Clough took charge of his first league match as manager of Mansfield Town against Saturday’s opponents back in November.

Midfielders George Lapslie and Harry Charsley both netted to secure all three points away from home in a 2-1 win.

The referee for Saturday’s game will be David Webb, assisted by Robert Merchant and George Byrne. The fourth official will be Mark Dwyer.

Mr. Webb last took charge of a Mansfield fixture in our 3-1 defeat to Lincoln City in the 2017/18 Papa John’s Trophy.

Mansfield Town played out a thrilling 0-0 draw at home to Forest Green Rovers on Tuesday night.

The game boasted a high tempo throughout as both sides looked to attack while simultaneously defending stoutly.

Both sides saw their best chances denied by stunning saves from the opposition goalkeeper. Firstly, Jamille Matt’s downwards header was acrobatically clawed away by Aidan Stone and then Lewis Thomas made himself big to deny Jason Law.

However, despite numerous chances at both ends, neither side could find a winner to steal all three points.

Stags’ manager Nigel Clough made one change to the side that faced Grimsby Town ahead of Tuesday evening’s clash with Forest Green Rovers. Stephen Quinn returned to the starting 11, replacing Stephen McLaughlin who dropped to the bench.

Additionally, skipper Ollie Clarke was included in the matchday squad in place of the injured Oli Sarkic.

The first chance of the game fell to Jamie Reid in the third minute. The Stags’ forward turned his man nicely on the edge of the penalty area, but his shot was straight down the throat of Rovers’ goalkeeper Thomas.

Reid earned himself another chance after wrestling the ball away from Chris Stokes but again his shot was too tame to cause Thomas any trouble.

The visitors struggled to create chances in the first ten minutes, with just two inconsequential free kicks hit straight into Mansfield players the highlight of their opportunities.

With 18 minutes on the clock, the Stags saw another great chance go amiss. Jordan Bowery, with his back to goal, laid the ball off to Harry Charsley from close range, but the Mansfield number seven fired his shot into the side netting.

Moments later, Forest Green saw the best chance of the half from either side go begging. Odin Bailey put in a high cross which found the unmarked Nicholas Cadden but he sliced his shot well wide of the mark.

Stone faced his first challenge just shy of the half-hour mark as Stokes hooked an effort towards goal, which the 21-year-old was equal to.

The next clear chance fell to the Rovers’ striker Matt in the 40th minute. He connected with Bailey’s cross from eight yards but couldn’t keep his effort on target. This proved to be the last chance of the half as the referee’s whistle went after one minute of added time.

With ten second-half minutes played, Mansfield almost pulled off a stunning counter-attack, travelling the full length of the pitch in just two passes but Reid couldn’t get the ball out of his feet quickly enough and Rovers tidied up.

The visitors created another great chance just before the hour mark and would’ve taken the lead but for a stunning save from Stone. Matt headed the ball towards the bottom corner which was met by the right hand of Stone who palmed it out for a corner.

It was then Thomas’ turn to make an impressive save as the Stags enjoyed a period of dominance. The Rovers goalkeeper made himself big to block Law’s shot from six yards after 67 minutes of play.

In the last minutes, Mansfield almost took the lead but for defensive heroics from the Rovers’ team who scrambled the ball off the line.

The end-to-end action continued well into the closing stages of the game but neither side could convert their chances and the game finished goalless.

The Stags will now look ahead to Saturday when they travel north to face Tranmere. 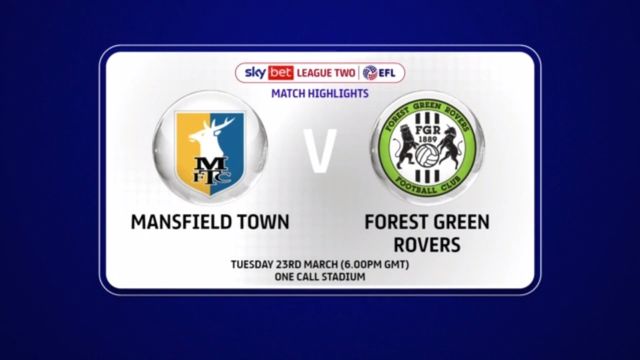 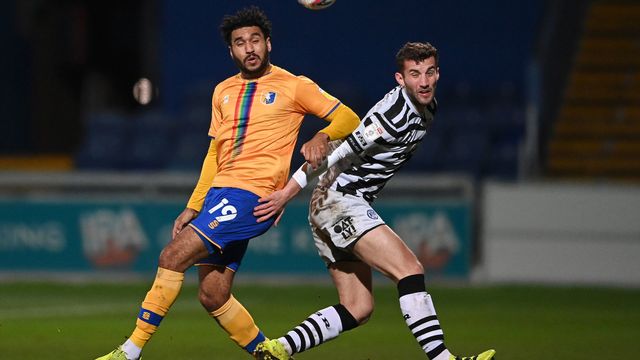