The Stags welcome league leaders Cheltenham Town to One Call Stadium on Tuesday for their latest Sky Bet League Two fixture (7pm). Here’s all you need to know ahead of the match…

The Stags will be without defender Ryan Sweeney after he was sent off for two bookable offences in Saturday’s defeat to Barrow.

Goalkeeper Aidan Stone and forward Oli Sarkic are both doubts for the game, while defender Joe Riley is a long-term absentee.

Midfielder George Lapslie and full-back Stephen McLaughlin could make a return to the squad for the fixture, as revealed by manager Nigel Clough in Monday’s news conference.

Tuesday’s visitors will likely be without Elliot Bonds, Will Boyle and Ellis Chapman for the fixture.

The Stags will look for a return to winning ways on Tuesday night, following Saturday’s disappointing 2-0 loss away to Barrow.

Last time out on home soil, the amber and blue recorded an impressive 1-0 victory against Morecambe.

Cheltenham sit at the summit of the Sky Bet League Two table, having accumulated 59 points from 32 games, winning their last four matches.

Last time out, they recorded a 3-2 victory at home to Port Vale.

We last faced Cheltenham in an Emirates FA Cup third round fixture back in January.

Extra-time was needed to separate the sides, following goals from Stephen McLaughlin and Alfie May in regular time.

Will Boyle’s goal in the 110th minute of the contest saw Cheltenham progress to the fourth round, where they were beaten by Manchester City.

The referee for Tuesday’s clash will be Scott Oldham, assisted by Alistair Nelson and Bradley Hall. The fourth official will be Oliver Bickle.

Mr. Oldham last took charge of a Mansfield fixture in our 1-1 draw away at Morecambe last season.

Mansfield Town came from a goal behind to record an impressive 3-1 victory over league leaders Cheltenham Town on Tuesday evening.

Sam Smith opened the scoring for the visitors after the break, only for Bowery to cancel out the lead almost immediately.

Jamie Reid and Bowery again made it three for the Stags and guaranteed victory for the amber and blue.

Nigel Clough made three changes to the 11 that started against Barrow.

The Stags received a welcome boost, as Stephen McLaughlin returned from a knee injury to begin in midfield.

Meanwhile, George Lapslie was called into the side for the first time since limping off against Walsall in February.

Being the table-toppers before kick-off, Cheltenham started the match as swiftly as expected. A number of long throw-ins from defender Ben Tozer were guided into the Stags’ six-yard box, but Stech did well to claim them.

With four minutes played, Mansfield had their first chance of the game.

Mal Benning hit a well-struck effort towards goal, yet goalkeeper Josh Griffiths managed to parry the ball out of danger.

Moments later, Jason Law danced past two Cheltenham players to thread a neat ball into Reid’s path. The striker attempted to beat Griffiths at his near post, only for his effort to drag wide.

A replica through ball caused panic for the visitors after 10 minutes.

Reid again outpaced the centre-backs, but was brought down on the edge of the area by the outrushing keeper. Griffiths received a yellow card for the tackle, while Law hit the wall with the successive free-kick.

The amber and blue mounted more pressure onto the Cheltenham goal as the quarter-of-the-hour mark approached.

Reid had a couple of shots blocked in the penalty area, before Ollie Clarke lurked at the far post and would have almost certainly converted a floated cross, had it not been for a last-ditch interception.

On 25 minutes, Mansfield had their best chance of the first-half.

Law’s corner was cleared as far as McLaughlin. He lofted a ball into Clarke and the captain passed laterally to Bowery, who had his shot tipped onto the woodwork from seven yards out. Farrend Rawson reacted fastest to the rebound, but Griffiths saved the header well and Cheltenham survived.

Despite the Stags’ pressure, Cheltenham fired a warning sign back immediately. Callum Wright found the net from a rebounded Sam Smith strike, although the former was deemed offside.

On the 38th minute, Cheltenham sent a long direct ball onto Smith’s head. He looked to loop the ball over Stech from inside the area, but the goalkeeper was composed enough to backtrack and hold possession on the goal line.

The end-to-end tempo remained as the half progressed. Both sides stretched play out wide, but each cross and counter-attack was cancelled out and the game stayed goalless at the interval.

Cheltenham were quickest out of the blocks in the second half, finding the opening goal after 51 minutes.

Chris Hussey burst down the left flank and crossed dangerously into the area. Smith rose highest to nod the ball past Stech and into the corner of the net.

After 63 minutes, Mansfield had the lead. Law turned quickly and hit the byline. The ball bounced around the six-yard box, but Reid pounced on a scrappy block to turn it in.

Reid turned provider, exchanging a clever one-two with Bowery that gave the number nine a clear sight on goal. He made no mistake in wrong footing Griffiths, striking the ball into the bottom left-hand corner and earning his brace.

After all of his creative play throughout the fixture, Jason Law was almost rewarded with a goal on 74 minutes.

Mansfield executed tidy build-up play and Law struck from 22 yards, but his effort sailed over the bar.

Nigel Clough’s men continued to search for more goals despite the two-goal cushion. Reid was denied a second by the right-hand post, after bypassing Tozer in the penalty box.

With the Stags pressing, Cheltenham looked to counter on numerous occasions.

However, Stech was relatively untroubled in goal and the centre-back pairing of Rawson and Perch were solid in clearing various crosses from the right wing.

Cheltenham had a penalty shout with five minutes to go. Indiana Vassilev tumbled under pressure from Lapslie, but the referee waved away the appeals.

That proved to be the final scare for Mansfield, as they closed out the game professionally to claim an important win.

ASSISTANTS: A. Nelson & B. Hall 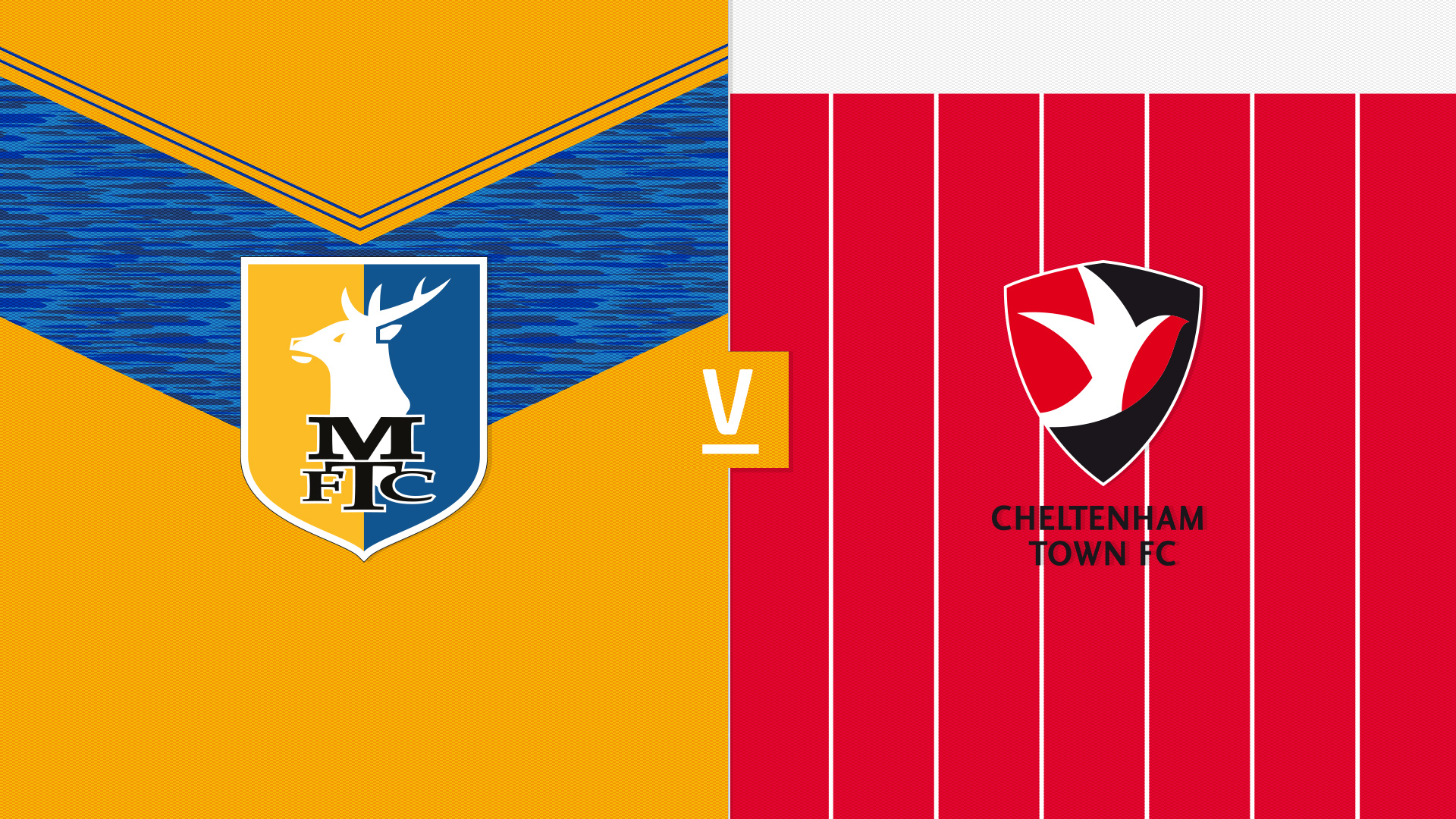 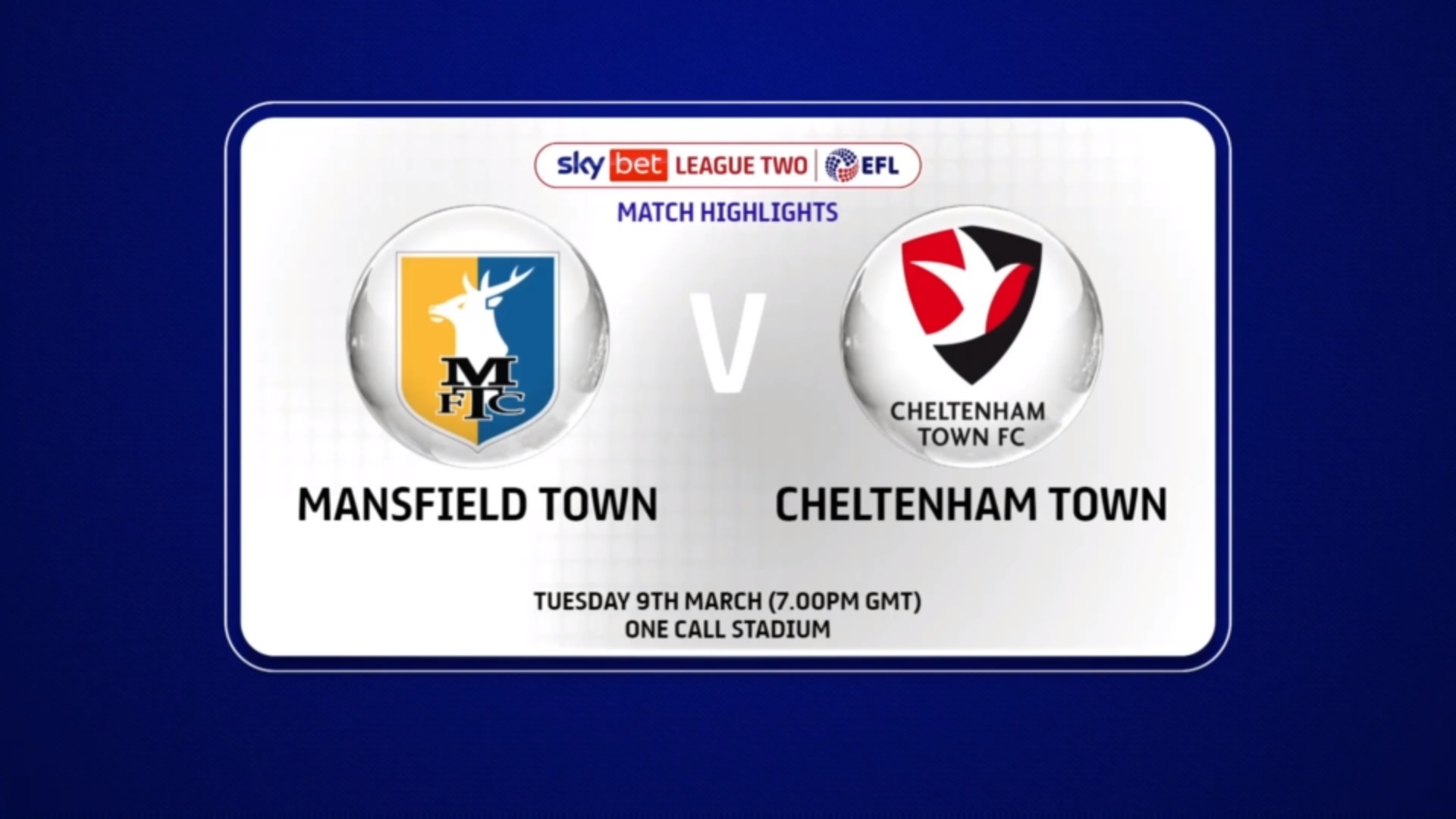 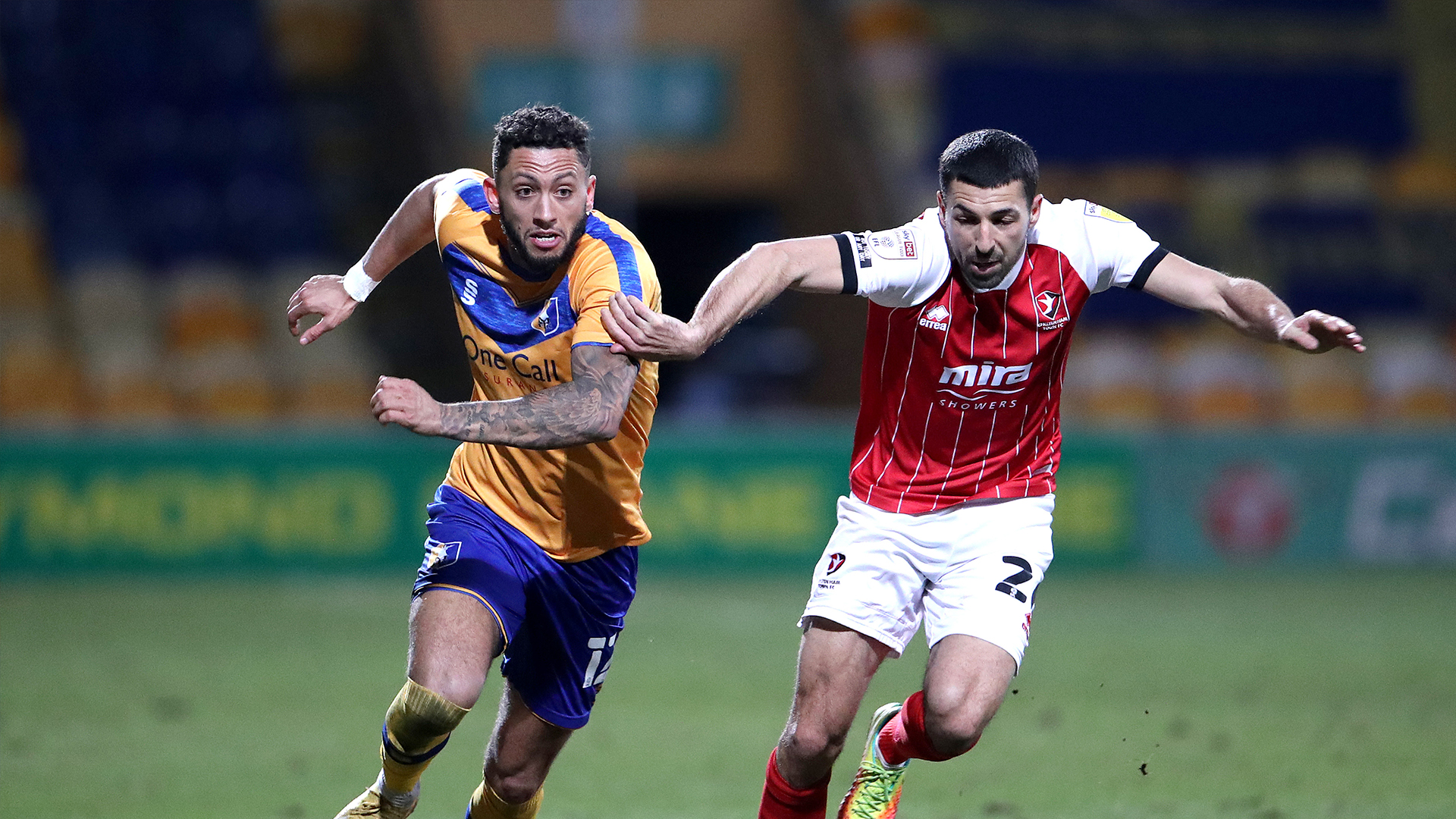