The Stags welcome Carlisle United to One Call Stadium on Tuesday evening for their latest Sky Bet League Two fixture (7pm kick-off). Here’s all you need to know ahead of the game…

Midfielders George Lapslie and George Maris are doubts for the fixture, as revealed by boss Nigel Clough in Monday’s news conference.

Captain Ollie Clarke may be rested for the game, but goalkeeper Aidan Stone could make a return to the squad.

Right-back Joe Riley is a long-term absentee for the Stags.

Carlisle will likely be without forward Joshua Kayode for the match.

The Stags were left frustrated on Saturday after being denied a point away at Crawley by a late James Tilley strike.

The Cumbrians made a return to winning ways on Saturday with their 3-1 home victory over Bradford City.

Their result against the Bantams leaves them 12th in the table, seven points ahead of the Stags, who are 16th.

Tuesday’s visitors came out on top the last time the two sides met, with Carlisle securing a 1-0 win at Brunton Park.

Omari Patrick netted the game’s only goal in front of 2,000 fans in Cumbria.

The referee for Tuesday’s match will be Michael Salisbury, assisted by Rob Smith and James Wilson. The fourth official will be Akil Howson.

Mr. Salisbury last took charge of a Mansfield fixture in our 3-1 defeat to Oldham Athletic in January 2020.

Mansfield Town fought back to earn a draw against Carlisle United on Tuesday evening at One Call Stadium.

A goalless first half brought several clear-cut opportunities at each end, but neither side could convert in front of goal.

Offrande Zanzala gave Carlisle the lead after the hour-mark with a fine finish, before Stephen McLaughlin’s well-struck free kick tied things up after 80 minutes.

Nigel Clough made two changes to the starting line-up from Saturday’s game at Crawley.

Aidan Stone regained his position in goal at the expense of Marek Stech. Meanwhile, Harry Charsley replaced Ollie Clarke in midfield, meaning the armband was passed onto James Perch.

Kick-off was pushed back by 30 minutes due to visiting players being delayed by a road incident.

That change in schedule did not impact the early exchanges, as both sides battled to control possession in midfield.

Jason Law’s quick feet at the byline gifted Mansfield the first corner of the game. Law curled the dead ball into the box dangerously, but Carlisle were able to head clear and regain their shape.

With seven minutes played, Jon Mellish found space in the Stags’ box. He flashed a pass across the face of goal, only for it to bypass the Carlisle strikers and drift out for a throw-in.

Less than 90 seconds later, Offrande Zanzala had a point blank first-time effort tipped around the near post by Aidan Stone.

The resulting corner found its way to Rhys Bennett in the six-yard box. As the ball looked destined to find the Mansfield net, Bennett mis-kicked it and Stone pounced at his feet.

The Stags responded with their own chance on 11 minutes, as Jamie Reid spun away from two United defenders. He unleashed a low shot on goal, but it was straight at Magnus Norman.

The amber and blue then had a flurry of corners within the opening quarter. The best of them came with a clever routine between Charsley and Mal Benning on 17 minutes.

The Stags’ left-back made a late run into the box and Charsley found him with a driven cross, but Benning’s final pass was intercepted by Carlisle’s defence.

Six minutes later, Mansfield came close once again. Stephen McLaughlin curled a 27-yard free-kick towards goal, which cleared the crossbar by a couple of yards.

As the half-hour mark passed, Mansfield continued to knock on the door for the opening goal.

Benning beat his man to squeeze in a cross to Jamie Reid. Reid dragged the ball back to Charsley, but his sight on goal was closed down quickly.

The rebound again dropped to the no.7 from ten yards out, but Bennett blocked the second successive shot.

Nigel Clough’s men kept much of the play inside the final third, but they were unable to find that golden chance before the interval.

The second-half commenced in lively fashion, with Carlisle gaining the upper hand.

However, a series of corners led to a fine counter-attack by the Stags.

Gordon and Benning were involved in the build-up, as a ball was threaded into Jason Law. He turned and fired an effort towards the near post, only for Norman to save via a deflection.

Charsley followed up as the ball fizzed around the penalty area off numerous attempted clearances, but the match remained level.

On 65 minutes, the visitors broke the deadlock.

Jon Mellish hit a powerful effort towards goal that deflected into the path of Zanzala. The unmarked Carlisle striker blasted his shot past Stone and into the roof of the net from eight yards out.

The Stags came close to finding an equaliser almost immediately after conceding.

Jordan Bowery held up the ball inside of the penalty area, laying the ball off to Charsley, yet his left-footed effort sailed high over the bar.

James Perch came even closer after 73 minutes. Norman was unable to catch a high ball among appeals for a foul on him.

As the referee waved away the shouts from the Carlisle bench, it allowed Perch to volley on the edge of area. He struck it superbly, however it ricocheted off the woodwork.

Just seconds later, Bowery took aim with a similarly placed volley, but he could not keep the shot low enough and it glanced over the goalkeeper’s crossbar.

As the minutes remaining entered single digits, Mansfield had their fully-deserved leveler.

A 19-yard free kick was smashed under the wall by McLaughlin, leaving Norman flat-footed as it nestled into the left-hand corner of the goal.

In the 91st minute, Mansfield had the final opportunity to claim all three points. Gordon crossed early from the right flank into Bowery, but his finessed shot glanced agonisingly wide and the referee signalled for full time.

The Stags are back at home this weekend when they welcome Grimsby Town to One Call Stadium. 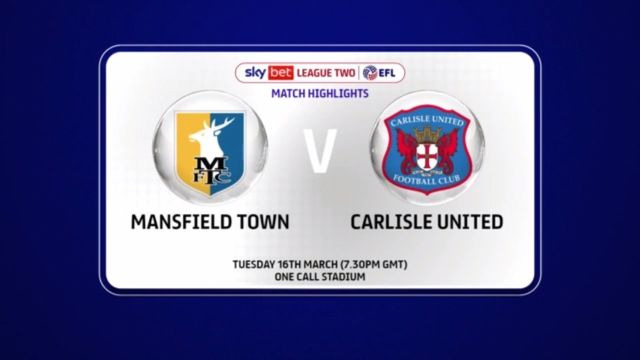 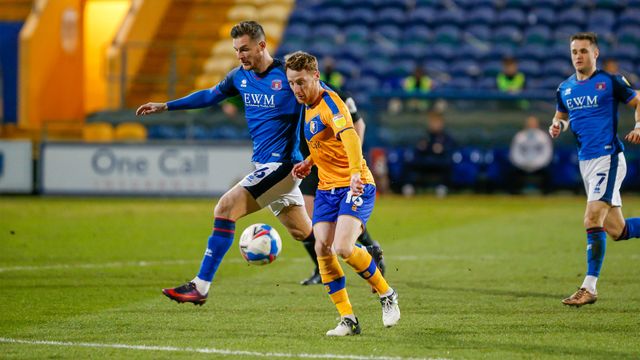