Next up for the Stags is a trip to face Crawley Town in Sky Bet League Two this Saturday (3pm). Here’s all you need to know ahead of the clash…

Forward Oli Sarkic (thigh) will be assessed in the days leading up to the fixture.

Goalkeeper Aidan Stone will also be assessed ahead of the match, after he was absent for Tuesday’s win over Cheltenham.

The Stags are boosted, however, by the availability of centre-back Ryan Sweeney, who returns from a one-game suspension.

Mansfield made an emphatic return to winning ways on Tuesday evening, beating league leaders Cheltenham Town by a 3-1 scoreline.

After going behind early in the second-half, two goals from Jordan Bowery and a further strike from Jamie Reid secured an important victory.

Saturday’s opponents are in good form heading into the match, winning their last two matches in Sky Bet League Two, and three of their last five.

The Reds have won both of their previous matches by a 1-0 scoreline, against Salford City and Tranmere Rovers.

The Stags and Crawley played out a thrilling 3-3 draw when the sides last met back in December.

Defender Ryan Sweeney had given the amber and blue an early lead, before three quickfire goals from the visitors in the second-half looked to have secured all three points.

The referee for Saturday’s game will be Thomas Bramall, assisted by Paul Lister and Darren Blunden.

The fourth official will be Christopher Wade.

Mansfield Town fell to a late defeat away at Crawley Town on Saturday afternoon.

James Tilley won the game for the home side in the 92nd minute when he fired low past Marek Stech at his near post to give Crawley all three points from an even contest.

The Stags came close in the tenth minute when Jamie Reid’s overhead kick forced Glenn Morris into a diving save.

Defender Ryan Sweeney returned to the squad following his one-match suspension alongside Oliver Sarkic, who was back from injury.

The first ten minutes proved eventful as both sides pushed for an early opener. Mansfield had the best of the early chances when Reid’s audacious overhead kick forced Morris, the Crawley goalkeeper, into a smart save.

The home side’s first dangerous chance came in the 12th minute when Nichols climbed highest from a corner, clipping the underside of the bar with a header, before Stech was able to hold the effort.

Crawley saw another chance go begging just five minutes later as Ashley Nadesan picked up the ball 18 yards from goal, unmarked, and with a clear sight of the target, but chose to pass the ball out to the left-wing and straight to Kellan Gordon.

Reid came close once again for the Stags as he met Stephen Quinn’s pinpoint cross but couldn’t quite keep his effort on target as it bounced past the post with 22 minutes played.

The next chance came with ten first-half minutes left to play. Nichols found himself in space on the edge of the Mansfield box and sent a curling effort for the top left-hand corner of Stech’s net, but the goalkeeper sidestepped across his line to catch the shot.

The Stags had a couple of half-chances as the first half came to a close; Reid fired over the bar from the corner of the box shortly before Jordan Bowery dragged his shot wide from the same position.

The second period started slowly. It wasn’t until the 55th minute that the first good chance of the half came to be as Archie Davies put in a low cross from the right-wing to an unmarked Nichols on the penalty spot.

The Crawley forward’s shot was powerful and well-struck but again Stech was equal to the effort as he got down superbly to palm it away.

Mal Benning picked up the game’s first yellow card just after the hour mark for an accumulation of late challenges. The resulting free-kick was clipped straight into the hands of the commanding Stech.

It took another 25 minutes for the next good chance of the game. A Crawley corner was headed goalward, forcing a goal-line clearance from the Mansfield defence as they attempted to preserve their clean sheet.

The Stags’ first clear chance of the half came with five minutes left to play as Tyrese Sinclair’s free-kick from the edge of the box was deflected narrowly over the bar.

Sinclair delivered the resulting corner, but James Perch couldn’t keep his header down.

Substitute Tilley won it for the home side in the 92nd minute when he received the ball on the edge of the box and smashed a low shot past Stech at his near post.

The Stags will now focus on next Tuesday, when they host Carlisle United. 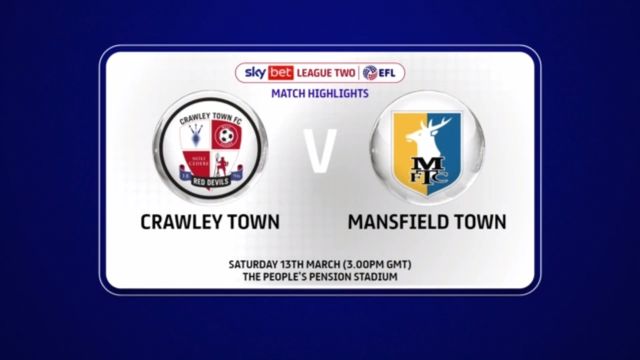 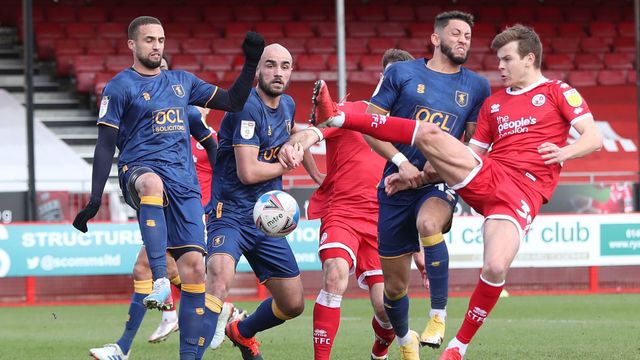