The Stags are back in action on Tuesday, as they face a trip to Bradford City in Sky Bet League Two (7pm). Here’s all you need to know ahead of the match…

The duo of Stephen Quinn and Jason Law will likely be available for the clash despite picking up knocks in the weekend’s 1-0 win over Morecambe.

Full-back Stephen McLaughlin is a doubt for the game, but forward Oli Sarkic has a chance of making the squad.

Mansfield forward Andy Cook, on loan with Tuesday’s opponents, will not be eligible to feature against his parent club.

The Stags returned to winning ways on Saturday with a hard-earned 1-0 victory over Morecambe at One Call Stadium.

Bradford City are in excellent form heading into Tuesday’s encounter, having won each of their last four matches in Sky Bet League Two.

We last faced the Bantams in October 2020, a match that ended 3-1 to the visitors at One Call Stadium.

Striker Andy Cook – now on loan at Bradford – was on target for the Stags.

The referee for Tuesday’s game will be Paul Howard, assisted by Ivan Stankovic and Andrew Dallison. The fourth official will be Wayne Grunnill.

Mr. Howard was also the referee the last time the two sides met, back in October at One Call Stadium.

Mansfield Town fell to a narrow defeat away at in-form Bradford City on Tuesday evening.

The Stags created chances away at the league’s second-most in-form team, coming closest in the third minute when Jason Law hit the post, but did not get the one goal they needed to claim what would have been a deserved point

The hosts scored the only goal of the game with 32 minutes on the clock as Danny Rowe volleyed home from close range, finishing off a well-worked move.

Ollie Clarke picked up a straight red card with just five seconds left to play which capped off a frustrating night in West Yorkshire.

Following a fantastic performance on Saturday against Morecambe, Stags’ manager Nigel Clough named an unchanged side to take on the Bantams at the Utilita Energy Stadium.

The Stags rushed out of the gates and almost took the lead in the third minute as Law’s shot from 12 yards crashed against the inside of the post, much to the relief of Sam Hornby in between the sticks.

It didn’t take long for Bradford to kick themselves into gear. A slightly heavy touch from Kellan Gordon was pounced upon by the home side but George Maris covered quickly and brought down the Bantams’ attacker, earning himself a yellow card.

Bradford continued to press as the game reached the 20-minute mark and came close again as Callum Cooke fired an ambitious volley at goal, but could only put his shot wide of the right-hand post.

Mansfield went close again shortly after as Law’s high cross towards the back post almost caught Hornby out, but the home ‘keeper managed to recover and climbed highest to catch the ball.

Just past the half-hour mark, the hosts took the lead. A scissor-kick volley of sorts from Rowe was comfortably converted after the ball was headed across goal by Niall Canavan towards the veteran forward.

Mal Benning picked up the game’s second yellow card for dragging down Ollie Crankshaw in the 44th minute, a moment that typified the Stags’ frustrated mood that had been evident since going behind.

However, the mood almost changed completely within the Mansfield ranks as substitute Harry Charsley put the ball in the Bantams' net, only for it to be ruled out by the linesman’s flag.

Bradford had the first good chance of the second-half after just five minutes. Ryan Sweeney slipped as he tried to clear a long through ball, allowing Rowe the space to strike a ferocious shot from a tight angle which was well saved by Aidan Stone.

Mansfield’s first meaningful shot of the second-half came from Jordan Bowery just before the hour mark; the striker found himself with space on the edge of the box, but his low shot was deflected wide by a sliding Canavan.

After a slow 15 minutes, the Stags came close again as Jamie Reid flicked Gordon’s cross goalward, but he was denied his fifth league goal of the season by an acrobatic clearance on the goal line.

Stone was forced to make a rare second-half save when Cooke fired a fierce, long-range shot at goal just eight minutes from time, which the 21-year-old was equal to.

With the last chance of the game, Clarke cut across his man from Law’s corner and headed straight across the face of goal, narrowly missing the far post; a chance that would’ve given the Stags the point they deserved.

The drama was yet to be concluded however as Clarke, the Mansfield captain, was shown a straight red card for violent conduct with just seconds left to play.

Mansfield will look to get back to winning ways on Saturday when they travel to second-from-bottom Barrow AFC. 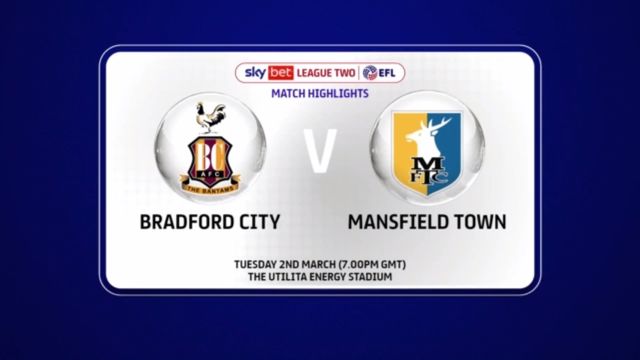 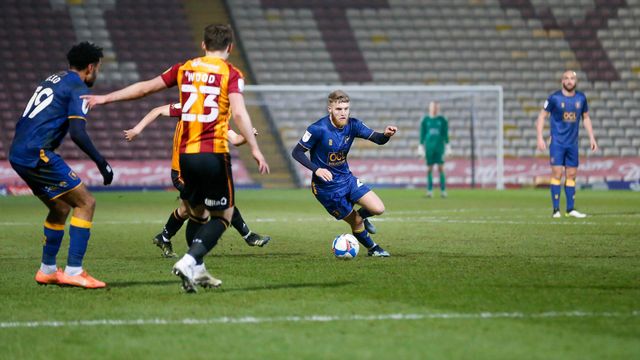