The Stags return to Sky Bet League Two action on Wednesday, as they travel to face Oldham Athletic for a 7.45pm kick-off. Here’s all you need to know ahead of the match…

James Perch has received a negative test for COVID-19 after he reported to feeling unwell on Sunday morning.

Kellan Gordon has resumed training following a hamstring problem, while it is hoped Nicky Maynard will recover from the same injury in time for the trip.

Wing-back Joe Riley is a long-term absentee and will miss Wednesday’s game.

The Latics will be without Andrea Badan, and frontman Danny Rowe is a doubt.

The Stags head into Wednesday’s fixture having won their last three matches in Sky Bet League Two, their most recent being an impressive 2-1 home win over Salford City.

Oldham sit one place above Mansfield in the league table ahead of the match, having accumulated two more points in the same matches played.

We last faced Oldham in January 2020, a 3-1 away loss at Boundary Park. Now-Tranmere Rovers midfielder Otis Khan was on the scoresheet for the amber and blue.

Referee Scott Oldham will take charge of Wednesday’s match, assisted by Gary Hilton and Simon Clayton. The fourth official will be Alan Clayton.

Mr. Oldham last took charge of a Mansfield fixture in our 1-1 draw away at Morecambe in February 2020.

We suggest that new users familiarise themselves with their iFollow Stags account ahead of Wednesday’s game, so that no issues arise on matchday when going to watch the game live.

Alfie McCalmont broke the deadlock with a near-post finish but the Stags were able to battle back impressively.

Harry Charsley initially restored parity before Ryan Sweeney built upon their dominance by touching home from point-blank range. Jamie Reid then raced clear to add a third goal against the Latics before a nervy ending ensued.

It was Conor McAleny who profited from a deflection to tuck away his strike, yet the Stags remained firm in defence and extended their unbeaten run in Sky Bet League Two to five games.

Nigel Clough made three changes for the trip to Greater Manchester as Aidan Stone replaced Marek Stech for only his second league appearance in 2020/21.

Kellan Gordon returned from injury while Andy Cook was given a starting berth up front; replacing Corey O’Keeffe and Mal Benning respectively.

Mansfield had made significant progress in the opening minutes – Reid flicking towards Jordan Bowery who was inches away from gaining a crucial touch – before the hosts took the lead.

From left to right, McAleny delivered a cross towards the opposite side where McCalmont was able to fire in at the near post.

Soon after, the same figure was presented with another chance after dispossessing Sweeney but the Stags’ custodian thwarted the effort with his boot.

It was an action-packed opening half at Boundary Park, which showed little signs of slowing down as Stephen McLaughlin’s teasing ball was nodded into the turf, and subsequently bounced wide, via Cook’s head.

Dylan Bahamboula then found himself running at the amber and blue rearguard but his low drive was repelled once more by Stone.

Another clear-cut opportunity quickly presented itself for Clough’s men – this time from a corner – yet Sweeney’s touch under pressure rose above the frame of the net.

However, the Stags persevered and turned the contest on its head within two minutes.

Lawlor charged from his goal line amongst a crowded penalty area and after being unable to make any connection with the punch, Charsley picked up the loose ball to slam his attempt home.

And instantaneously, Sweeney met the ball at the back post to steer in the Stags’ next attack which marked a deserved lead.

It proved to be an agonising end to the first-half, though, when Bowery had to chance for a third. George Maris was impeded inside the box by Raphael Diarra but the No. 9’s penalty clipped the outside of the upright.

And the touch proved even more important in the 50th minute.

Carl Piergianni hesitated in possession, allowing Reid to pinch the ball and slot into the far corner beyond Lawlor.

The contest’s tempo somewhat dropped but Mansfield’s eye for goal remained. George Lapslie planted himself onto Cook’s beautiful knockdown before rattling the crossbar via an audacious half-volley.

Gordon then found plenty of space to force McCalmont backwards, as his shot took a minor deflection forcing Lawlor into duty.

Although, proceedings were complicated when the Latics pulled one back. Substitute Danny Rowe released an effort that, through another deflection, presented McAleny with the opportunity to find the bottom corner.

Minutes later, Rowe leapt highest to connect with a powerful header but Stone was equal to claw away magnificently.

The Stags will hope to continue their excellent league form when they next face table-toppers Carlisle United at One Call Stadium this Saturday. 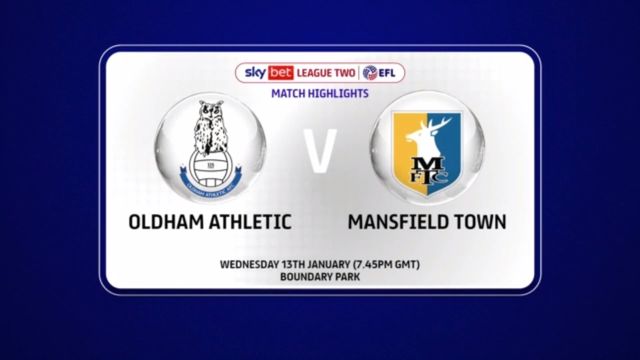 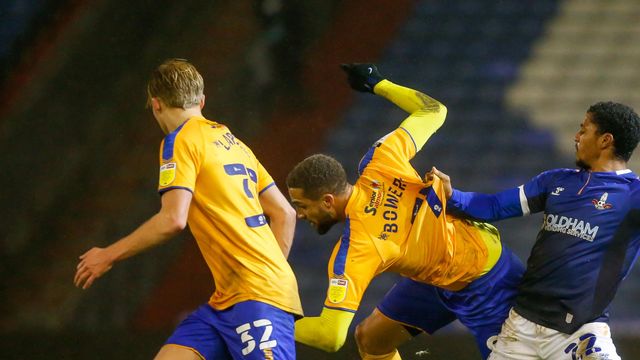