The Stags are back in action on Tuesday, when they welcome Salford City to One Call Stadium for their rearranged Sky Bet League Two fixture. Here’s all you need to know ahead of the match…

Striker Nicky Maynard is a doubt for the fixture due to a hamstring problem. Wing-back Kellan Gordon also has a hamstring issue and will likely miss out.

Wing-back Joe Riley is a long-term absentee and will miss the match.

The Ammies will likely be without midfielder Darron Gibson for Tuesday's game.

The Stags secured back-to-back wins on Saturday, following up their Boxing Day victory over Scunthorpe United with a 4-0 hammering of Port Vale at home. Striker Jordan Bowery netted a hat-trick in the game.

Salford sit eighth in the table heading into the match, just one point shy of a play-off spot.

The referee for Tuesday’s match will be Will Finnie, assisted by Robert Atkin and Bradley Hall.

The fourth official will be Samuel Barrott.

Those who have purchased a match pass for the original fixture will be eligible to watch Tuesday evening's match without purchasing a 'new' match pass.

Following a bright start under the Nottinghamshire floodlights, Lapslie fired his side ahead when pouncing upon a loose ball from 20 yards.

His teammate, Bowery, then notched his sixth goal in four league games to double the advantage which was ultimately seen through despite Di’Shon Bernard’s stoppage time consolation.

Nigel Clough named an unchanged line-up from the weekend’s four-goal haul against Port Vale and watched his side burst out with similar energy against the Ammies.

After finding the breakthrough 43 seconds into Saturday’s contest, Ollie Clarke sought to replicate proceedings yet his delivery was cleared despite catching Bernard unaware in possession.

Mansfield were knocking the ball around with explicit confidence and were almost rewarded with their first notable move. Ending a string of passes, Lapslie fed Bowery inside the area but the attempt was blocked at source.

However, it would take just 15 minutes to secure the opener.

A curling cross was fired slightly beyond the reach of Clarke’s jump but as the immediate danger was extinguished, Lapslie stepped onto the loose ball and tucked his first-time effort into the corner.

Salford picked themselves up quickly – via a set-piece opportunity – and saw Bernard’s header claimed calmly by Marek Stech.

The Stags instantly returned to piling on the pressure when Lapslie harried goalkeeper Vaclav Hladky into blindly clearing his lines.

Minutes later, the hosts were behind the opposition defence once more. James Perch threaded towards Harry Charsley but the shot was smothered well by Salford’s custodian.

Although there was little the visitor’s No. 1 could do about Mansfield’s second.

On the half-hour mark, Perch’s next swinging delivery was left to bobble around a crowded penalty area and Bowery duly slammed home to mark scoring in four successive Sky Bet League Two fixtures.

Richie Wellens’ men then applied enough desire to see James Wilson drive towards goal yet the strike was held by Stech.

Into the second period and the away side seemed somewhat rejuvenated. Ibou Touray unleashed a rasping effort that whistled narrowly above the bar before Ryan Sweeney’s crucial challenge stopped Wilson taking aim.

Farrend Rawson soon rose highest for the Stags’ first corner of the evening only to be denied by a fine, tipped Hladky save.

Mansfield continued to pick their moments to break and did so once more with 20 minutes remaining – Mal Benning miscuing his punt from Clarke’s pass.

Clough’s charges never let up until the final whistle as Benning danced his way into the penalty area, beating several players but being unable to release Reid.

In stoppage time, though, Bernard prodded home from a corner kick to establish momentary hope but the Stags were able to power home and collect all three points.

Attentions will now to the Emirates FA Cup on Sunday afternoon as Mansfield take on Cheltenham Town for a place in Round Four. 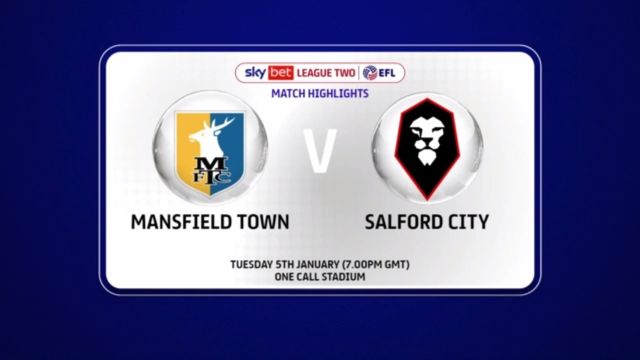 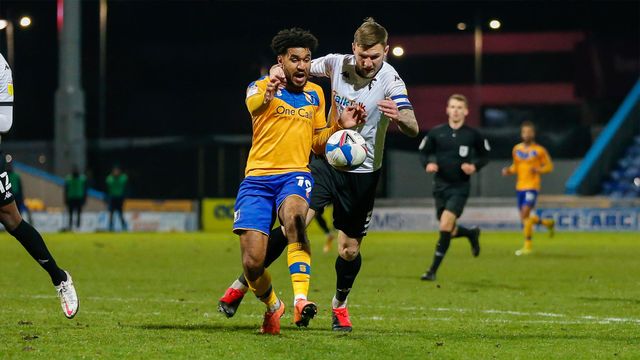