The Stags begin 2021 on home soil, as they welcome Port Vale to One Call Stadium this Saturday (3pm). Here’s all you need to know ahead of the match…

Striker Nicky Maynard is a doubt for the fixture, with boss Nigel Clough expecting the forward to be out for ‘a week or two’ with a hamstring injury.

Long-term absentee Joe Riley will continue his rehabilitation from the ACL injury he suffered in pre-season.

Port Vale will be without loan defender Mitch Clark, who returned to parent club Leicester City earlier this month.

The Stags will be aiming for back-to-back victories this weekend, following the 3-2 win away at Scunthorpe United on Boxing Day.

Goals from midfielder George Lapslie and striker Jordan Bowery, alongside a Manny Onariase own goal, saw the Stags end 2020 in winning fashion.

Port Vale will be looking to build on their 0-0 draw away at Bradford City on Tuesday evening, with the Valiants sitting 16th heading into Saturday’s match.

We last faced Port Vale on Boxing Day in 2019, a match that ended two goals apiece at One Call Stadium.

Goals from Nathan Smith and Leon Legge saw the Valiants lead 2-0 going into the final ten minutes, but efforts from striker Nicky Maynard and now-Blackpool winger CJ Hamilton saw the amber and blue earn a point late on.

Referee Ben Toner will take charge of Saturday’s match, assisted by Marvyn Amphlett and Abbas Khan. The fourth official will be Lisa Rashid.

Mr. Toner last took charge of a Mansfield fixture in our 3-1 home loss to Lincoln City in this season’s Papa John’s Trophy.

Jordan Bowery’s classy hat-trick fired Mansfield Town to a dominant 4-0 victory over Port Vale at One Call Stadium in their first game of the New Year.

Ollie Clarke ensured 2021 got off to a flying start as he swept home from a rebound inside 50 seconds in North Nottinghamshire.

Bowery then added his first of three just after the half-hour mark inside the area to give his side a two-goal cushion at the break.

And after captain Leon Legge was dismissed early into the second period for Port Vale, Bowery finalised the result with two assured finishes amidst tricky, snowy conditions.

Nigel Clough made one enforced change to his starting line-up with James Perch deputising for an injured Kellan Gordon at right-back, while Aaron O’Driscoll was therefore restored to the bench.

And the hosts made a perfect start to 2021 inside the first minute.

Harry Charsley found enough space to unleash a low drive that was initially tipped onto the upright by Scott Brown before Clarke lurked in prime position to tuck the loose ball away.

Port Vale chased a response through Alex Hurst, who skipped beyond two Mansfield figures only to find his goalbound effort being thwarted by Mal Benning on the line.

Mansfield had been finding early freedom down the right channel and continued to utilise the outlet. Perch and Charsley exchanged a neat one-two but the latter’s eventual delivery lacked accuracy.

Clarke then looked to turn provider for Jordan Bowery with a slick cutback, yet Luke Joyce’s timely intervention halted the attack.

However, Vale were unable to deny Mansfield a second at their next attempt.

George Maris’ low delivery ran through to Bowery and the No. 9 needed no invitation to sweep home from close range.

The Stags were awarded a corner at the end of a highly-dominant first period but came out of a goalmouth scramble without possession.

And Mansfield’s afternoon was made slightly easier with a dismissal for the visitors on 47 minutes.

Legge – who had previously picked up a caution for a challenge on Jamie Reid – brought down George Lapslie bearing into the area leaving referee Ben Toner with an easy decision.

Soon after, there was a sight at goal for substitute Tom Pope at the back post but his header was stopped by an alert Marek Stech.

Charsley had placed himself on the cusp of the 18-yard box and watched Maris’ latest set-piece fall straight into his lap as he fired over with a powerful half-volley.

Goalkeeper Brown then hoisted his kick straight into the feet of Bowery on the halfway line, who drove the entire way up the opposite end of the pitch before seeing his effort blocked.

Proceedings quickly became even better for the Stags as Bowery ascended through the gears.

After Charsley was clipped inside the area, Mansfield’s frontman received the ball from his teammate to fire home his second with aplomb from 12 yards.

And, just three minutes later, he was able to round off his hat-trick after firing a clever effort against the inside of the post to seal possession of the match ball.

In the meantime, Mansfield’s boss had introduced five substitutes in two handfuls with one being youngster Tyrese Sinclair.

The No. 27 was soon given the chance to add a fifth with another spot-kick but dragged the attempt narrowly wide of Brown’s target.

Mansfield return to One Call Stadium on Tuesday evening with their rescheduled fixture against Salford City. 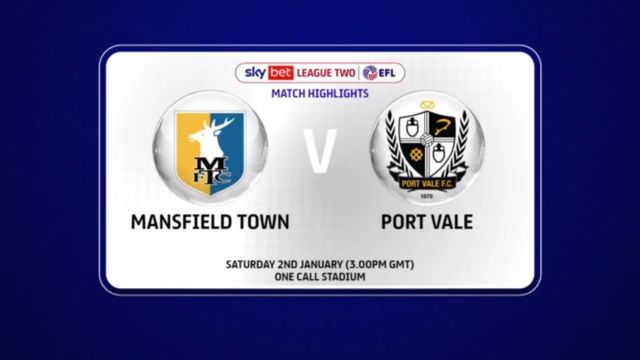 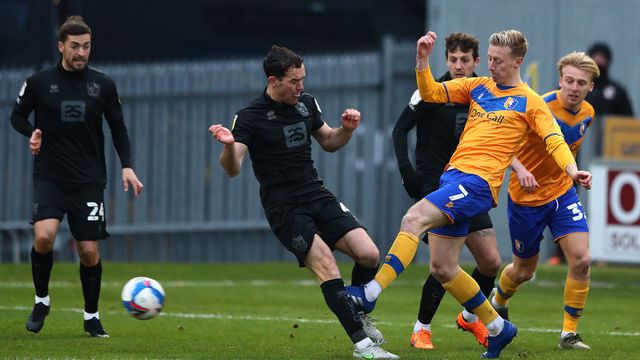