The Stags are next in action on Wednesday evening, when they welcome Bolton Wanderers to One Call Stadium for a rearranged Sky Bet League Two clash. Here’s all you need to know ahead of the match…

Midfielder George Lapslie will miss the match due to a hamstring injury.

The game may also come too soon for defender Kellan Gordon and forward Oli Sarkic, with the pair both missing Sunday's draw with Colchester due to respective knee and thigh problems.

Wing-back Joe Riley is a long-term absentee and will miss Wednesday’s match.

Bolton will likely be without defender Harry Brockbank (groin).

The Stags stretched their unbeaten run in Sky Bet League Two to eight games on Sunday, drawing 2-2 away at Colchester United.

Bolton head into Tuesday’s fixture having won two of their last three game, which puts them one point above the Stags in the league standings, having played one game more.

We last faced Bolton earlier this season, a 1-1 draw away from home in Sky Bet League Two.

Midfielder George Lapslie opened the scoring for caretaker boss Richard Cooper’s side, but a late equaliser from Antoni Sarcevic ensured the spoils were shared.

The referee for Wednesday’s clash will be Antony Coggins, assisted by Gareth Mellor and Paul Evans. The fourth official will be Samuel Barrott.

Match passes purchased for the original fixtures will be valid for Wednesday's clash.

We also suggest that new users familiarise themselves with their iFollow Stags account ahead of Wedesday’s game, so that no issues arise on matchday when going to watch the game live.

Mansfield Town’s eight-game unbeaten run in Sky Bet League Two came to an end in frustrating fashion as they let a two-goal lead slip against Bolton Wanderers on Wednesday evening.

The Stags took the lead in the 65th minute after Ollie Clarke’s powerful shot forced an error from Trotters' goalkeeper Matthew Gilks.

One soon became two when Jamie Reid coolly slotted home with 18 minutes left to play, with the Stags seemingly in control.

But all the hard work was undone in the space of ten minutes as Declan John netted a fortunate goal, followed by a Mal Benning own goal and Arthur Ghanoua strike.

Stags' manager Nigel Clough sent an unchanged line-up out to face the Trotters having been pleased with what he saw in the 2-2 draw away at Colchester United last time out.

George Lapslie, Kellan Gordon, and Oli Sarkic continued to miss out with their respective hamstring, knee, and thigh injuries.

The game started in fiery fashion as Harry Charsley picked up the first yellow card of the game within two minutes for a sliding challenge on Oladapo Afolayan directly in front of the incensed Bolton dugout.

The Stags had the first big chance of the game just before the ten-minute mark as Jordan Bowery found himself with space inside the Bolton box, but his tame effort was comfortably dealt with by the Bolton goalkeeper Gilks.

The fiery tone continued as James Perch joined his teammate in the referee’s notebook shortly before Stephen Quinn went down under a clumsy challenge in Bolton penalty area with 12 minutes played, but the Stags’ shouts for a spot kick were waved away without hesitation.

Mansfield continued to create chances; Quinn saw his shot inadvertently blocked by teammate Bowery and then Ryan Sweeney’s header was cleared off the line by former Stag Alex Baptiste, as the home side’s dominance became unquestionable.

Bolton’s first clear chance came just before the half-hour mark as Afolayan dribbled his way to the edge of the Mansfield box and cracked his shot against the inside of the post - a let off for the Stags.

The visitors continued to edge their way into the match and went close again with ten first-half minutes to play; John’s shot deflected into Marcus Maddison who couldn’t sort his feet out and the ball trickled wide.

This turned out to be the last action before halftime as a goalless, but very entertaining, first period came to an end.

Bolton rushed out of the gates as they kicked off the second half. Good work from Maddison down the right-wing allowed him to put a fierce cross into the Mansfield box but it sailed straight across the face of goal without a touch.

The game slowed down rather drastically as it approached the hour mark with little more than sloppy passing and inconsequential crosses on show at both ends of the pitch, but the deadlock was finally broken in the 65th minute.

Clarke unleashed a powerful shot at goal from 25 yards out which went straight through Gilks, who could only punch it into the corner of the net.

A revitalised Stags' team continued to pile pressure on the visitors, and it wasn’t long before they were rewarded for their efforts.

A penetrating through ball found Reid in the penalty area who kept his cool and slotted home confidently in the 72nd minute.

The two-goal lead didn’t last long however as John picked up the ball on the left wing and put in a first-time cross, which sailed over Stone and into the top right-hand corner of his net.

John also played his part in the equaliser, with his low delivery ricocheting off Benning and into the net.

The Stags almost took the lead back again immediately as Charsley’s shot was deflected just wide of the mark and out for a corner.

Alas, it was Bolton who netted the winner. Gnahoua picked up the ball on the edge of the box and curled his shot into the bottom corner, out of Stone’s reach.

Mansfield continued to push for an equiliser but the Bolton defence held firm and took all three points back to Greater Manchester. 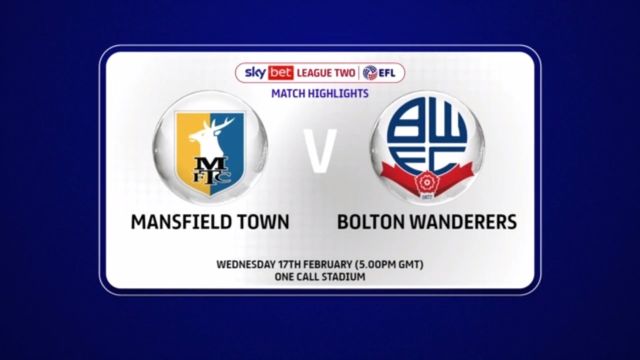 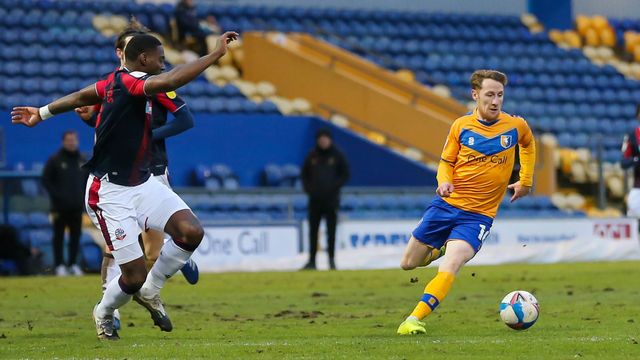