Next up for the Stags is a trip to face Colchester United in Sky Bet League Two this Sunday. Here’s all you need to know ahead of the match…

Mansfield will be without midfielder George Lapslie after the 23-year-old suffered a hamstring injury in Tuesday night’s match at Walsall.

Wing-back Joe Riley is a long-term absentee and will also miss the game.

The U’s may be without goalkeeper Dean Gerken, who has been recently sidelined with a back injury.

The Stags stretched their unbeaten run in Sky Bet League Two to seven games on Tuesday evening, but the 1-1 draw at Walsall did put to an end the impressive five-match winning streak.

This weekend’s opponents also saw their last outing result in a draw, a 0-0 scoreline away at Leyton Orient on Saturday.

We last faced the U’s at One Call Stadium in November 2020. A goal from Nicky Maynard saw the Stags lead into the closing stages of the match, but a late Luke Norris equaliser ensured the spoils were shared.

Mansfield’s last trip to the JobServe Community Stadium was a memorable one, with the amber and blue coming from two goals down to win 3-2 in January 2019.

The referee for Sunday’s match will be Christopher Sarginson, assisted by Marc Wilson and Mike Desborough. The fourth official will be Michael Chard.

Mr. Sarginson last took charge of a Mansfield fixture in our 3-3 draw with Crawley Town in December 2020.

We suggest that new users familiarise themselves with their iFollow Stags account ahead of Sunday’s game, so that no issues arise on matchday when going to watch the game live.

Mansfield Town were held to a 2-2 draw away at Colchester United in Sky Bet League Two’s sole Sunday fixture.

The Stags took the lead inside five minutes as George Maris’ free-kick was inadvertently turned into his own net by Tommy Smith.

Callum Harriott levelled proceedings heading into the interval, but a confident finish from James Perch looked as though the Stags may have secured the three points late on.

However, Frank Nouble’s stunning strike in the 89th minute of the clash saw the points shared at a bitterly cold JobServe Community Stadium.

Boss Nigel Clough signalled two changes from the 1-1 draw with Walsall in midweek, the first of which being skipper Ollie Clarke coming in for the injured George Lapslie.

Right-back Kellan Gordon felt discomfort in his knee during training, and was therefore replaced by defender Perch.

On-loan Blackpool forward Oli Sarkic has a thigh issue, meaning he was also excluded from the matchday 18.

A frantic start to the game saw the Stags lead inside five minutes, as a Maris cross caused problems aplenty in the Colchester box, seeing Smith bundle the ball into his own net.

Jamie Reid battled well to create an opening for himself at the edge of the box, winning the ball on two occasions before dragging an effort wide.

The striker finished off Maris’ pinpoint through ball with aplomb moments later, but was denied by the raising of the offside flag on the near side.

The hosts crafted a good opening as frontman Nouble beat the offside trap, but could only fire into the side netting from a tight angle.

Striker Jordan Bowery was beginning to grow into the game on the left-hand side, skipping past his marker and seeing a low delivery turned behind by Tom Eastman at the near post.

It was Steve Ball’s men who found the game’s second goal, however. The Stags failed to properly clear a corner from the left, allowing Harriott to find the bottom corner with a fine finish from just outside the box.

An injury to Tom Lapslie in added time – brother of Stags’ midfielder, George –  delayed the referee’s half-time whistle, which saw the sides eventually head into the interval level-pegging.

Maris and Bowery linked up superbly to craft the first chance of the second period, but the Mansfield forward was met with a crowd of bodies in the Colchester area as he tried to create space for a shot.

Defender Ryan Sweeney was caught off guard by Colchester forward Kwame Poku, but recovered well to prevent an effort from the home side’s No.23.

The eyes of full-back Stephen McLaughlin widened when a Mansfield corner was cleared to the defender, although the powerful strike that followed sailed wide of the mark.

Referee Christopher Sarginson was given a decision to make when Bowery was seemingly brought down by Josh Doherty when through on goal, with the man in the middle opting to allow play to continue.

Colchester goalscorer Harriott showed nimble footwork in the penalty area but could only pick out the grateful hands of Aidan Stone with his flamboyant back-heel.

Ten minutes from time, the Stags regained their lead. Reid found space on the right before cutting the ball back to Perch, who provided a confident finish to beat Shamal George.

Although it looked as though the amber and blue may have earned the win away from home, they were dealt a blow in the closing moments of the tie.

Nouble was allowed to cut in from the left, before he unleashed a stunning effort to leave Stone helpless in the Stags’ goal.

The Mansfield shot-stopper was called into action late on, denying Noah Chilvers with a fine reflex save, before claiming well from the resulting corner.

This was the final act of Sunday’s fixture, with attention now firmly fixed on Wednesday evening’s home match against Bolton Wanderers in Sky Bet League Two. 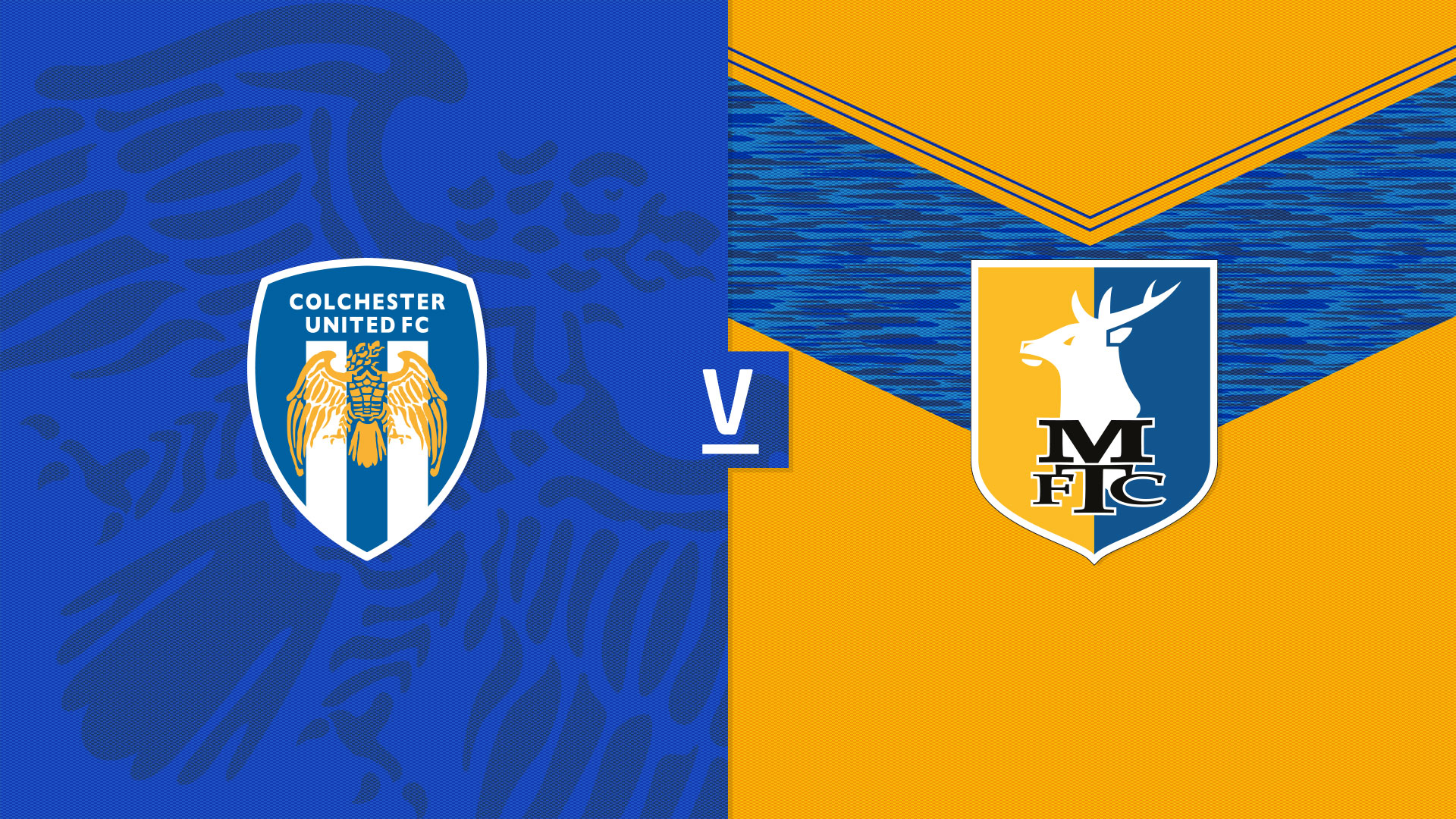 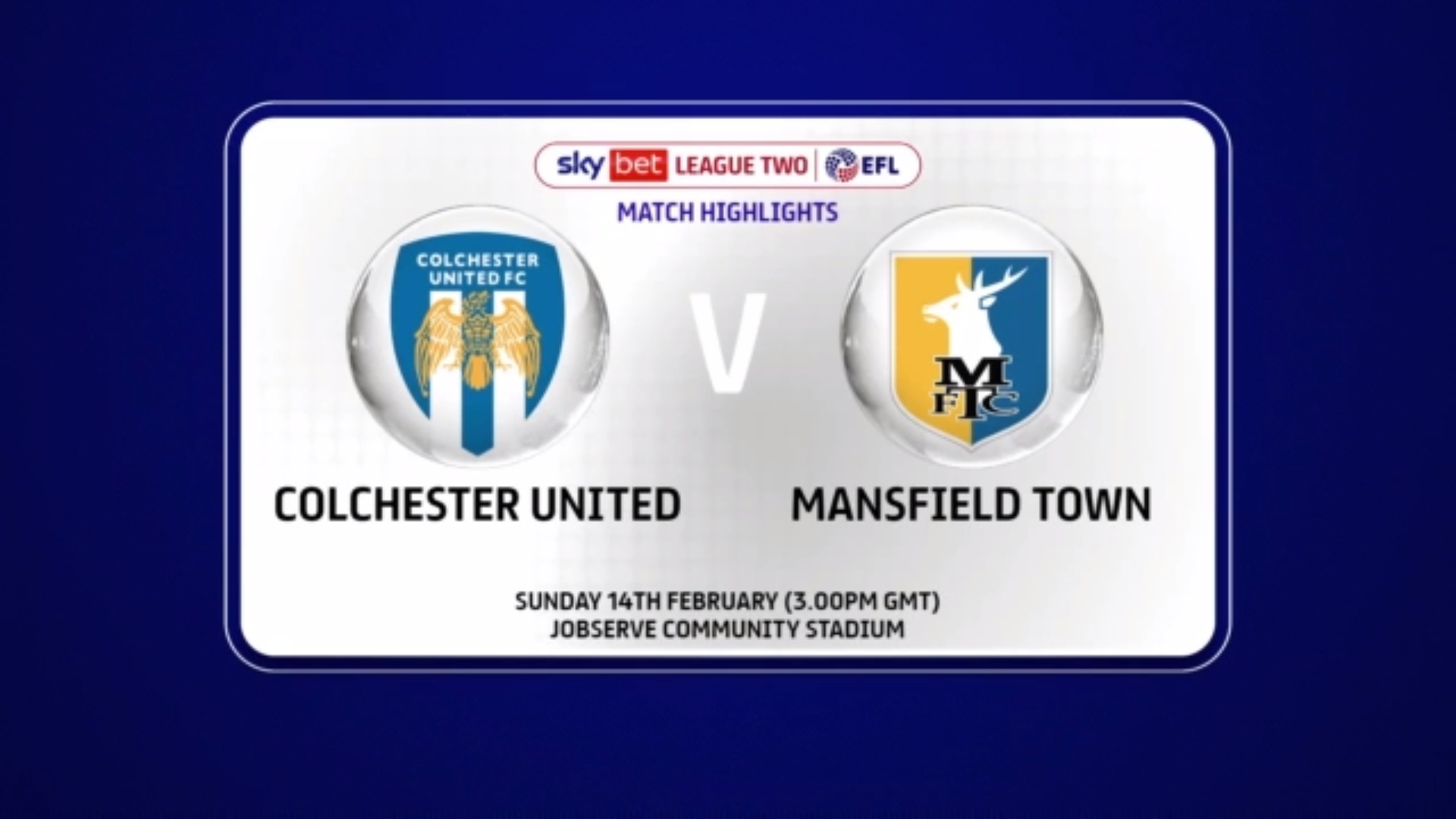 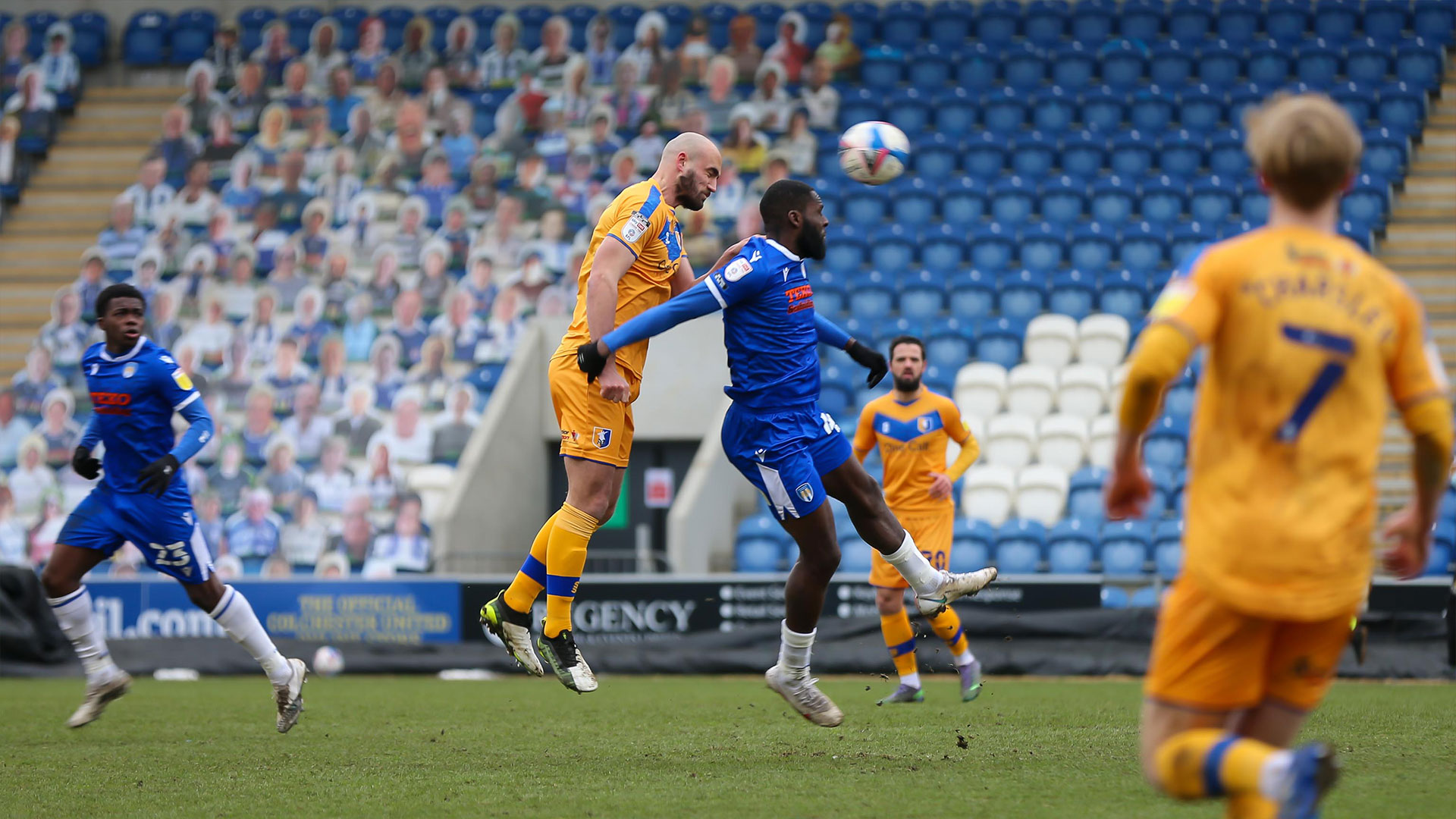