The Stags take on Scunthorpe United away from home in this season’s Boxing Day fixture. Here’s all you need to know ahead of the clash…

Striker Nicky Maynard is set to have a scan on a hamstring injury to determine his availability for Saturday’s game.

Wing-back Joe Riley is a long-term absentee and will miss Saturday’s fixture.

The Iron will be without striker Kevin van Veen, who is out with a hamstring tear.

The Stags drew 1-1 with Southend United last time out, in a Sky Bet League Two encounter at One Call Stadium.

After a disappointing first-half display, Mansfield rallied in the second period, and a great strike from Jordan Bowery capped off an improved half of football.

Scunthorpe United sit two places above the Stags heading into Saturday’s match, and have won two and lost three of their last five matches.

We last faced Scunthorpe in a Papa John’s Trophy fixture in November, a match that ended 2-1 to the Stags at the Sands Venue Stadium.

Defender Ryan Sweeney and striker Jamie Reid ensured it was a winning start to life as manager of Mansfield Town for Nigel Clough.

Graham Salisbury will be the referee, assisted by Ian Smedley and Stephen Wade. The fourth official will be Thomas Bramall.

Mr. Salisbury last took charge of a Mansfield fixture in our 4-3 home loss to Forest Green Rovers in January 2020.

Mansfield Town battled to an action-packed 3-2 victory over Scunthorpe United at the Sands Venue Stadium on Boxing Day.

George Lapslie broke the deadlock with a quarter-hour passed in Lincolnshire as his touch at the back post proved vital.

Emmanuel Onariase and Farrend Rawson then accidentally turned home at the wrong end within a nine-minute spell to set up a tight second-half encounter.

And despite John McAtee profiting from his teammate’s delivery, Jordan Bowery’s second goal in as many Sky Bet League fixtures was enough to see Mansfield back to NG18 with all three points.

Mansfield set about to assert their dominance in the early moments and almost profited from their near-monopoly of possession. Ollie Clarke chased a loose ball towards the byline and his eventual cross was swept above the bar by Jamie Reid.

However, despite Scunthorpe threatening to find their feet it took just 16 minutes to find the opener.

Another cross – this time from the right flank – was delivered deep towards the far post by Kellan Gordon and Lapslie had planted himself in the perfect place to glance home.

Soon after, Marek Stech was called into action for the first time on a chilly afternoon as he clawed Abo Eisa’s looping header away from danger.

Jamie Reid was then twice denied a rapid counter attack for the visitors before Rawson threw his body in the direction of a low, driven Scunthorpe strike to keep the hosts at bay.

And with the Stags’ next batch of pressure came another goal.

Deliveries from wide areas continued to flow via Mal Benning and when Onariase attempted to hook away, the centre-half inadvertently turned it beyond the best efforts of goalkeeper Mark Howard.

Stech was then required to claim Alex Gilliead’s punt but could do nothing about the hosts’ next attack.

The same player, Gilliead, struck another effort just minutes later with Rawson’s inadvertent touch leaving his ‘keeper wrong-footed as rolled into the corner.

Into the second period and Eisa curled a harmless effort into the top of the stand that towered behind Stech’s target.

Both sides were searching for the next goal – albeit for different reasons – as Mansfield upped the ante. Harry Charsley was presented with two quick-fire opportunities but was unable to beat Howard with either.

Soon after, though, the action showed no signs of being stemmed.

Rawson flicked a brilliant header towards the near post and while the initial effort was repelled, Bowery ensured he was alive to the danger to divert the subsequent ball across the goal line.

The home side were again able to halve the deficit just 10 minutes thereafter. Substitute Ryan Loft began to cause problems, creating an opening for McAtee to put away with a side-footed finish.

Scunthorpe’s No. 9 then found himself behind the Mansfield backline but his effort was thwarted by the legs of Stech.

Meanwhile, Andy Cook had likewise been introduced up top but watched his own strike fizz wide of the target.

The Stags were expectedly penned back for large parts – forced to hold onto their one-goal lead – but managed to limit the Iron to few chances and secure maximum points on the road.

Clough’s men return to action in three days’ time when they face Salford City at One Call Stadium on Tuesday evening. 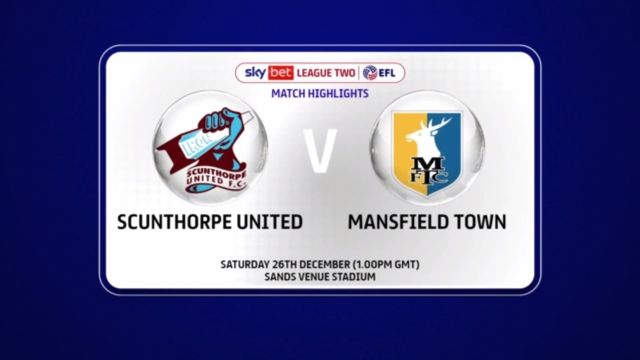 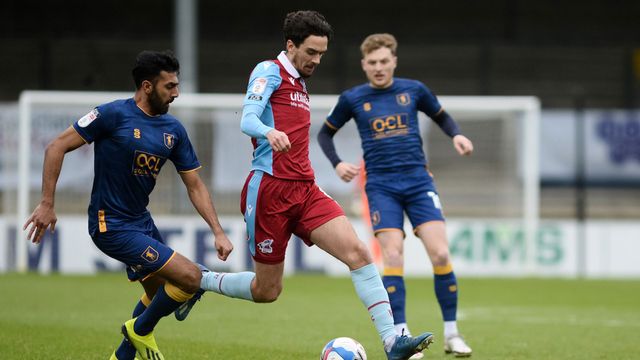