The Stags are back on home soil this Saturday as they welcome Southend United to One Call Stadium for a 3pm kick-off. Here’s all you need to know ahead of the match…

Boss Nigel Clough confirmed that striker Nicky Maynard and defender James Perch are in contention for Saturday’s game after they were both absent from Tuesday’s loss to Carlisle United.

Right-back Joe Riley is a long-term absentee and will miss Saturday’s game.

For Southend, Lewis Gard, Nathan Ralph and John White are likely to miss out.

The Stags have lost just twice in their last 12 outings, but one of these defeats did come on Tuesday evening against high-flying Carlisle.

Southend’s form has improved of late, with the Shrimpers winning back-to-back matches heading into Saturday’s clash.

We last faced Southend in a Sky Bet League Two clash in April 2015, a game that ended 2-0 to the Shrimpers.

The referee for Saturday’s match will be Brett Huxtable, assisted by Richard Woodward and Paul Stonier. The fourth official will be Wayne Grunnill.

Jordan Bowery’s strike earned a point for Mansfield Town in a 1-1 draw against Southend United on Saturday afternoon.

Premier League loanee James Olayinka placed the visitors in the driving seat with a spectacular curler on 27 minutes after back and forth action in Nottinghamshire.

Although, Mansfield returned from the break with restored belief and pressed for an equaliser that arrived when Bowery lashed beyond Mark Oxley from inside the area.

Nigel Clough named an unchanged line-up for the fourth consecutive match with the only alteration being James Perch – returning from injury – for Aaron O’Driscoll on the bench.

And the Stags XI were on the front foot inside the early moments.

A neat exchange of possession between George Lapslie and Ollie Clarke set the latter into the area but a wayward first touch meant the chance was squandered.

Southend were quickly down the other end appealing for a penalty after Simeon Akinola collided with Ryan Sweeney, yet the referee remained unmoved.

Several missed and blocked opportunities followed before the visitors took the lead.

Arsenal loanee Olayinka received the ball from Terrell Egbri on the edge of the area, touched into his path before placing an inch-perfect curler into the top corner.

It took the Stags little time to mount a response. Lapslie took aim from distance and had his strike parried by Oxley towards Harry Charsley, where the No. 7 failed to capitalise at the second attempt.

Kellan Gordon then drilled a dangerous, low ball across the face of goal but it was hooked clear as several amber and blue shirts lurked.

Into the second period and the home side were intent on restoring parity with the introduction of Andy Cook at the interval.

And the substitute had an almost brilliant chance to bear down towards the opposition target had it not been for Jamie Reid’s under hit through ball.

Soon after, the Stags were left bewildered by their latest attack.

Bowery ghosted into the centre and directed a powerful header towards Oxley’s goal before Shaun Hobson fortunately lashed the ball into his own crossbar. The subsequent effort via Mal Benning was then inadvertently blocked by the midriff of Lapslie.

The midfielder then had his own effort skid wide as he latched onto Bowery’s slide-rule ball off balance.

However, Clough’s men would only have to wait a few extra minutes to restore parity.

The Stags had upped the ante with the clock ticking towards its conclusion when Bowery took matters into his own hands, firing low and hard underneath Oxley.

Pressure continued to grow through the hosts with Lapslie’s front-post cross being punted clear for momentary Southend relief.

Minutes later, substitute Stephen McLaughlin assumed responsibility of a dead-ball situation but whipped his effort into the stanchion prior to Clarke’s fizzed drive skipping beyond the adjacent piece of woodwork.

The amber and blue continued their pursuit of three points with late half-chances but ultimately the spoils were left to be shared in NG18.

Mansfield now have seven days to prepare for their trip to Scunthorpe United in Sky Bet League Two on Boxing Day. 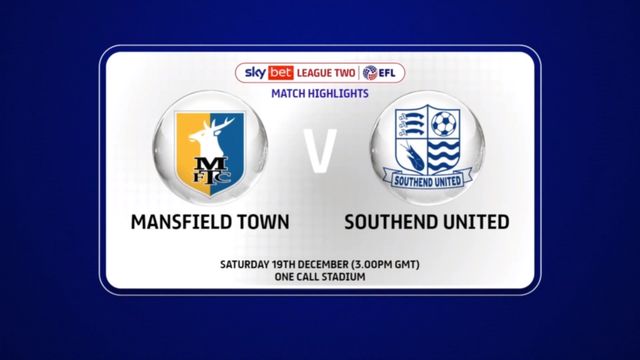 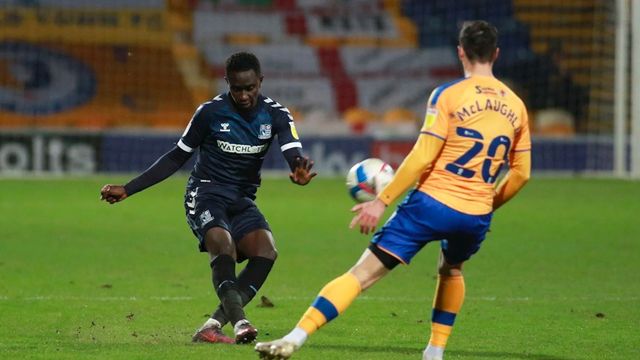