Next up for the Stags is a trip to face Grimsby Town on Saturday 12 December for a Sky Bet League Two clash (3pm). Here’s all you need to know ahead of the match…

After putting pen to paper on a contract extension until the end of the season earlier this week, winger Stephen McLaughlin may be in contention for a return to the squad after a recent ankle problem.

Defender James Perch is likely to miss the weekend’s game with a hamstring injury.

Wing-back Joe Riley will also miss out, as he continues his recovery from a long-term ACL injury.

The Stags have lost just one of their last ten outings, and fought back in dramatic fashion to draw 3-3 with Crawley Town last time out.

Mansfield went 1-0 up in Saturday’s clash at One Call Stadium, but three quickfire goals from the visitors in the second-half left the amber and blue shellshocked.

However, the Stags found a way to rescue a point via strikes from midfielder George Lapslie and striker Andy Cook.

Grimsby’s most recent win came against Crawley Town, but the Mariners have lost their three matches since that victory.

Both sides sit level on 15 points heading into the weekend’s match.

Grimsby came out on top the last time the two sides met, as the Mariners edged a tight contest 1-0 at One Call Stadium.

Our last trip to Blundell Park was a successful one, however, as former Stag Krystian Pearce’s stoppage time goal earned all three points for the amber and blue.

The referee for Saturday’s match will be Carl Brook, assisted by Oliver Bickle and Geoffrey Liddle. The fourth official will be Declan Ford.

This will be the first Mansfield match that Mr. Brook has taken charge of in his career.

Nicky Maynard’s penalty secured a point for Mansfield Town after a 1-1 draw against Grimsby Town on Saturday afternoon.

Goalscoring opportunities were few and far between throughout the first period before the Sky Bet League Two contest gained traction.

Ira Jackson lurked inside the Stags’ penalty area to break the deadlock from a close-range rebound but Maynard climbed off the bench to restore parity from the spot just six minutes later at Blundell Park.

Stephen McLaughlin was also deemed fit enough to return from injury as he took a place on the bench.

An uneventful start to proceedings was marked by Owen Windsor’s long-range strike that Marek Stech held comfortably before the pace began to accelerate under the floodlights.

Mansfield were feeling their way into the contest and carved out a notable opportunity. George Maris’ low delivery in front of the Grimsby back-line was marginally ahead of the outstretched Jordan Bowery, who couldn’t divert the cross goalwards.

However, excellent defensive work then prevented the opener.

Space emerged for George Williams as the hosts passed their way forward but a crucial sliding challenge by Farrend Rawson denied the No. 10 a gilt-edged chance inside the box.

The Stags responded with a brief period of possession and Mal Benning’s high, swinging ball was nodded into the grasp of Sam Russell via George Lapslie’s head.

Another delivery – this time from a corner – was leapt towards by Ryan Sweeney yet the header was planted into the turf, allowing the Grimsby custodian to claim once more.

Ian Holloway’s men ended the first period with a corner at the far side but, despite a scramble inside the penalty area, the Stags were able to clear and bring a first-half of few chances to a close.

Mansfield emerged from the dressing room with lifted intent and drove at the heart of Grimsby’s defence five minutes into play.

Jamie Reid was able to slip George Lapslie away through the centre but after taking two touches attempting to evade Luke Waterfall’s presence, the strike was diverted into the side netting.

Ollie Clarke then struck a fierce drive towards goal but Russell repelled the effort with his legs before collecting Harry Charsley’s follow-up.

Somewhat against the tide, though, Grimsby took the lead on 63 minutes.

Elliott Hewitt’s curler from the edge of the box was pushed away by Stech but substitute Jackson found himself positioned to tap into an empty net on the rebound.

The Stags were spurred on by falling behind and after a double alteration of Andy Cook and Maynard, the latter was thrusted straight into the spotlight.

Lapslie found Charsley bearing down on goal but when the No. 7 was fouled as he attempted to round the Grimsby ‘keeper, Maynard assumed responsibility of the spot-kick to fire home an equaliser.

Soon after, Waterfall leapt highest from the hosts’ latest corner but Stech produced a fine, reflex save to extinguish the danger.

McLaughlin, who was brought on for his first appearance since injury, then took aim from a dead-ball situation but his hit clipped the outside of the Mariners’ net.

Owura Edwards subsequently curled two efforts wide of the upright into stoppage time without troubling Stech, as both sides recorded one point apiece.

Mansfield are next in action on Tuesday evening when they travel to Carlisle United. 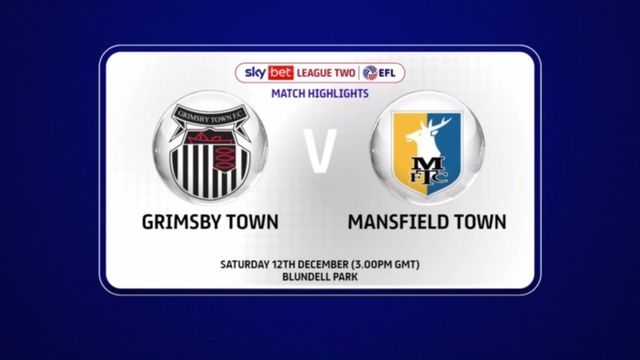 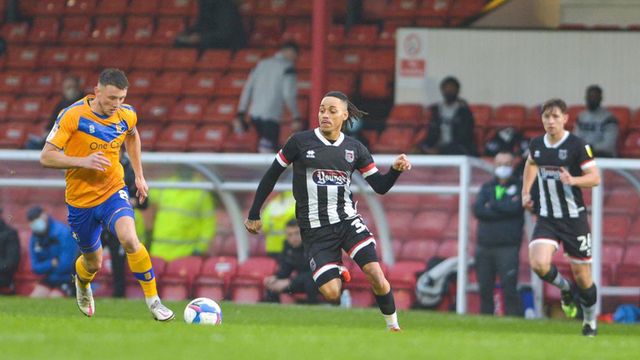