The Stags face their second away fixture in three days on Tuesday as they make the long trip north to face Carlisle United at Brunton Park. Here’s all you need to know ahead of the match…

Defender James Perch will continue to be assessed in the lead-up to the fixture, following a recent hamstring injury.

Midfielder George Maris (ankle) and strikers Nicky Maynard and Andy Cook (dead legs) are likely to be in contention for Tuesday night.

Wing-back Joe Riley is a long-term absentee and will miss Tuesday’s clash.

The Stags head into Tuesday’s clash having lost just once in the last ten matches, a spell that includes Saturday’s 1-1 draw away at Grimsby Town.

Mansfield’s opponents are in fine form going into the game, as the Blues currently sit third in the Sky Bet League Two table.

We last faced Carlisle in February 2020, a clash at One Call Stadium that ended two goals apiece.

Striker Nicky Maynard, who netted in Saturday’s 1-1 draw with Grimsby, scored twice in our last outing against Tuesday’s opponents.

Tuesday’s referee will be Peter Wright, assisted by Barry Gordon and Chris Isherwood.

The fourth official will be Andy Haines.

The Stags’ were made to travel home empty-handed as Patrick sealed all three points with an instinctive touch and finish towards the end of the opening period.

Nigel Clough stuck with an identical starting line-up that battled to a draw against Grimsby Town last Saturday.

Under the floodlights in Cumbria it was Mansfield who were able to showcase their attacking intentions first. Captain Ollie Clarke powered into the half-space that presented itself at the edge of Carlisle’s box before his effort skidded beyond the upright.

Quickly after, an end-to-end contest threatened to emerge with Josh Kayode’s low drive being thwarted by a smart Kellan Gordon block.

And when the hosts next traversed forward they were left bewildered.

Joe Riley had beaten the Mansfield back-line to latch onto a scooped ball over the top and when his strike looked to be arrowing into the bottom corner, Ryan Sweeney arrived in timely fashion to somehow divert the ball over the target.

Mansfield replied down the right channel and almost took an extraordinary lead. George Lapslie flicked the ball above his marker, waited for a single bounce before almost catching Paul Farman unaware from 35 yards.

A subsequent corner was awarded, and cleared, before the hosts countered only to see another attempt blocked inside the penalty area.

Carlisle had been in the ascendency with the clock ticking towards half-time – Callum Guy striking the latest effort wide – until they took the lead on 39 minutes.

Patrick handled Jack Armer’s delivery with a precise touch, allowing the winger to swivel and find the opposite corner in one motion.

Jon Mellish also lashed a late attempt into the side netting but Marek Stech remained untroubled, leaving the Cumbrians with a one-goal advantage at the break.

While the Cumbrians sought to build upon their advantage, the Stags strung their first significant passing move together of the second period.

Gordon was fed possession as he advanced down the nearside and after the eventual cross caused momentary confusion, Jordan Bowery’s follow-up was blocked at point-blank range by Aaron Hayden.

The evening’s flow was then consistently interrupted by small fouls and stoppages that allowed neither side to gain momentum.

Stags No. 32, Lapslie, was soon required to anticipate his defensive duties; Riley found a yard of space in a dangerous area but the midfielder was positioned smartly to produce a fine block.

The same Carlisle figure pulled the trigger from distance but was unable to test Stech as the custodian claimed with ease.

Mansfield were awarded several set-pieces opportunities towards the conclusion of Tuesday evening, yet the deliveries were wasteful allowing the hosts to clear.

In stoppage time, substitute Andy Cook flicked a direct ball towards Bowery but the advancing runner was halted in his tracks by Hayden.

And it proved to be the last notable action with Mansfield hoping to bounce back when they return against Southend United at One Call Stadium on Saturday 19 December. 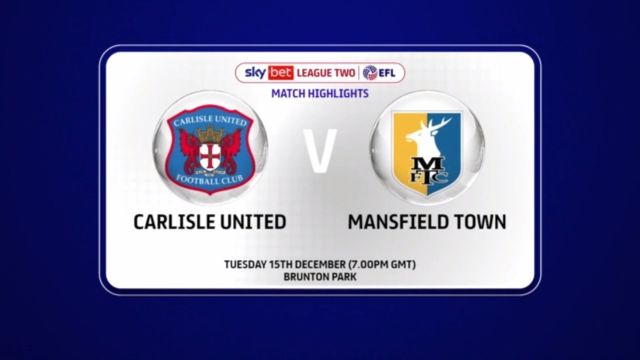 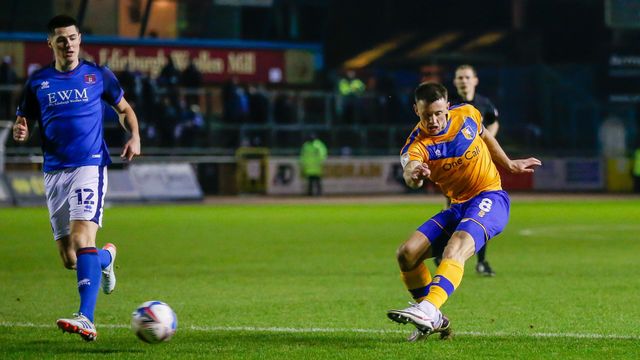