Next up for the Stags is a trip to face Salford City, this Saturday in Sky Bet League Two (3pm). Here’s all you need to know ahead of the match…

Blackpool loanee Oli Sarkic will miss the game due to a hamstring injury.

Wing-back Joe Riley is a long-term absentee and will also miss out.

George Lapslie, James Perch and Tyrese Sinclair were on target for Mansfield at One Call Stadium.

Salford still have hopes of achieving a play-off spot this season, and currently sit three points away from their goal.

The Ammies will be looking to build on their 2-0 win away at Walsall on Tuesday night.

Mansfield came out on top the last time these two sides met, by way of a 2-1 win at One Call Stadium in January.

Lapslie and frontman Jordan Bowery fired home the goals for the amber and blue.

The referee for Saturday’s match will be Anthony Backhouse, assisted by Peter Gooch and Richard Wigglesworth.

The fourth official will be Mark Cunliffe.

Mansfield Town’s four-game unbeaten streak came to an end on Saturday afternoon as they lost 2-0 away at Salford City.

Salford took an early lead through Ash Hunter who finished off a neat move to give the home side the advantage from the fifth minute.

The Ammies added a second just after the hour-mark through Ian Henderson’s stunning acrobatic effort from the edge of the box.

The hosts were reduced to ten men when Richie Towell was sent off for violent conduct, but the Stags couldn’t take advantage and left The Peninsula Stadium without a share of the points.

Mansfield had their chances but the best of them were denied by smart saves from the City goalkeeper Vaclav Hladky.

Stags' boss Nigel Clough has made two changes to the side that beat Scunthorpe for Saturday afternoon's match away at Salford City.

Skipper Ollie Clarke missed out through injury so was replaced by Jason Law and Jordan Bowery came into the side ahead of Jamie Reid.

The Stags had the first clear chance of the game when Tyrese Sinclair found himself one-on-one with Czech goalkeeper Hladky in the third minute. Sinclair did well to bring the ball under control but could only fire straight at the 30-year-old from close range.

This was enough to spark a reaction from Salford who took the lead in the fifth minute through Hunter. The attacking midfielder received the ball off Robbie Gotts and swept the ball into the far corner of Aidan Stone’s goal.

The next 20 minutes consisted largely of Mansfield dominance with an embedded narrative surrounding who could take a throw-in furthest away from where they were supposed to, Di’shon Bernard and Stephen McLaughlin battling that one out.

Eventually another clear chance was forged when Sinclair won the ball high up the pitch and gave it to Stephen Quinn on the left-wing. Quinn’s cross was met perfectly by George Lapslie whose bullet header was saved spectacularly by Hladky as his side remained in the ascendancy.

This proved the last good chance of the half and the Stags went in at the break undeservedly a goal down.

Again, the Stags had the first good chance of the half which fell to Lapslie this time. Quinn put in a shallow and slightly high ball which Jordan Bowery did well to divert to Lapslie who volleyed the ball at goal from the edge of the box and into the arms of Hladky.

The second half continued to mirror the first as, despite the Stags' dominance, Salford were again the ones to get a goal, another one of quality.

Hunter did well on the left-wing and played to ball to Ibou Touray who put in an out-swinging cross. Henderson met the delivery beautifully with an acrobatic effort into the bottom right-hand corner of the goal in the 62nd minute, giving Stone no chance.

This proved to be the first piece of action of a crazy ten minute period in the game as the hosts were reduced to ten men as Towell was given his marching orders for what appeared to be a kick on Kellan Gordon, who had entered the fray just seconds earlier.

The intensity continued as Henderson was given a chance to grab a quickfire brace as he stepped up to take a penalty conceded by Stone for a foul on Hunter. The 21-year-old goalkeeper received a yellow card for his troubles but guessed correctly and saved Henderson’s penalty down to his left.

There was then concern as defender Farrend Rawson was involved in a heavy collision with substitute goalkeeper Jamie Pardington and was taken off the pitch via stretcher. This led to 11 minutes of added time and the game restarted with 93 minutes on the clock.

There was no further action as the game came to its conclusion with the Stags left wishing they had made more of their first-half dominance.

Attention now turns to the penultimate game of the season next Saturday (1st) at home to Oldham Athletic. 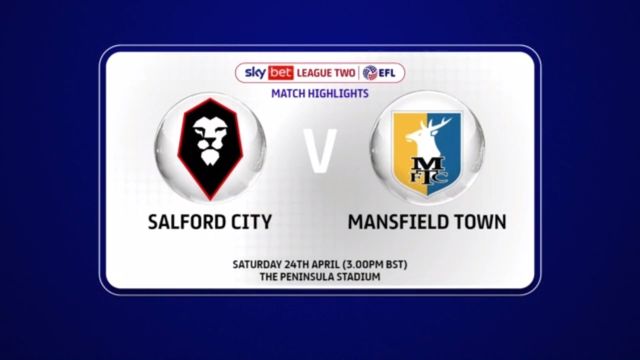 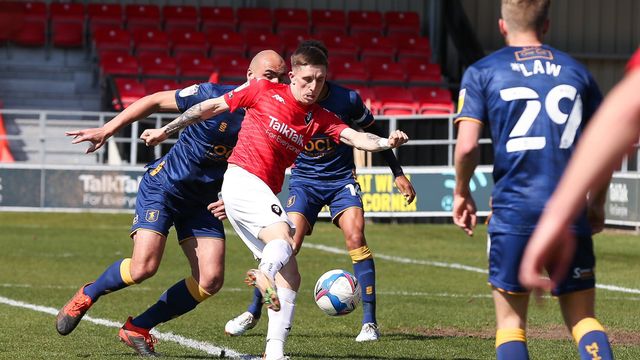