Next up for the Stags is Tuesday evening’s home match against Scunthorpe United, which will get under way at 7pm. Here’s all you need to know ahead of the game…

Midfielder Stephen Quinn will be assessed ahead of the fixture, boss Nigel Clough revealed, due to an ankle problem.

Long-term absentee Joe Riley and forward Oli Sarkic, out with a hamstring injury, will miss the game.

The Stags made a return to winning ways on Saturday, with defender Ryan Sweeney scoring in a 1-0 win away at Stevenage.

Scunthorpe have lost their last two matches, but can go ahead of Mansfield in the table with a win on Tuesday night.

We last faced the Iron on Boxing Day, with the Stags emerging as victors from the game, courtesy of a 3-2 win.

George Lapslie and Jordan Bowery scored for the amber and blue, along with an own goal from Scunthorpe man Manny Onariase.

The referee for Tuesday’s match will be Brett Huxtable, assisted by Martyn Holmes and Declan Ford. The fourth official will be Paul Stonier.

George Lapslie gave the Stags a well-deserved lead with just under 20 minutes on the clock, bundling the ball home from three yards for his sixth goal of the season.

James Perch drilled home the second goal with a fantastic finish from long-range to all but secure the result before Tyrese Sinclair poked home his second goal at One Call Stadium in as many games.

Boss Nigel Clough named one change to the side that won away at Stevenage on Saturday afternoon, bringing in captain Ollie Clarke for frontman Jordan Bowery.

The first ten minutes passed with little incident however the Stags were in control and showing the same attacking intent on display in the first half of Saturday’s win. However, they failed to trouble Rory Watson in the Iron’s goal in this period, coming closest through a Jamie Reid header which went just over the angle from a corner.

The early pressure was eventually rewarded as, in the 19th minute, Lapslie bundled the ball over the line after Watson spilled Perch’s cross straight into the attacking midfielder’s path.

Mansfield almost doubled their lead as the clock ticked towards the half-hour mark; Perch drilled another dangerous cross into the box at the Quarry Lane End, finding Tyrese Sinclair who did well to turn and shoot but could only locate the side netting with his effort.

Aidan Stone’s services remained unrequired as the game reached the 33rd minute when the Iron registered their first and only shot of the half, Devarn Green slicing the chance well wide from the edge of the penalty area.

Just four minutes later, Lapslie should have had his, and Mansfield’s, second of the evening. Clarke received the ball on the right-wing and drove a low ball to Lapslie, the goal scorer took a touch and the ball bounced up nicely for a close-range volley which was diverted over the bar by some spectacular defending.

The Stags could smell blood, and were continuing to push for that crucial second goal. From the resulting corner, George Maris took control of the ball and volleyed across the face of goal, with his right foot, narrowly missing the target.

As the second half got underway, Neil Cox’s Scunthorpe side seemed rejuvenated, exhibiting some attacking intent but still lacking any conviction or threat.

This period of Iron insurgence was short-lived as the Stags seized back control from the 50th minute with three great opportunities the first of which came Stephen Quinn who received the ball on the edge of the area and attempted to curl his shot into the far corner. He would’ve succeeded but for the head of Ryan Loft who put it over the bar.

Next, it was Lapslie who saw another chance go begging due to desperate defending as Watson got down low to collect the 23-year-old’s fierce drive from the penalty spot. Finally, the Scunthorpe goalkeeper denied Reid’s poked effort by making himself big, as the Iron’s defensive heroics became their only saving grace thus far.

The Stags went close again ten minutes later as Sinclair saw his first-time shot saved by Watson who gratefully dived on the ball at the second attempt after spilling the original effort.

Sinclair had the next chance of the game too, picking up the ball in a wide position and through on goal. Appearing to see his name up in lights instead of the unmarked Quinn on the opposite wing, the youngster blazed an audacious effort wide of the target with 15 minutes left to play.

Finally, Mansfield got their second goal as their veteran right back Perch drilled home a fantastic long-range effort which bent beautifully away from Watson and into his bottom left-hand corner.

Two soon became three as Sinclair got in on the act, sliding in at the back post to convert Perch’s skewed shot and secure Sky Bet League Two safety for the Stags. 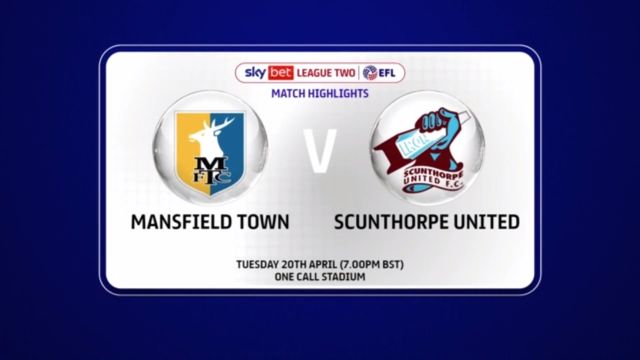 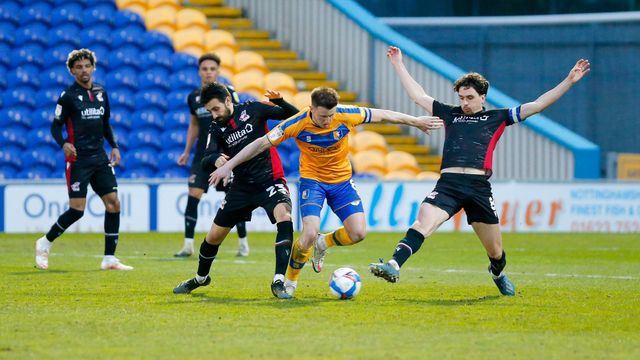