The Stags are back on home soil this Friday, when they welcome Newport County AFC to One Call Stadium for a 6pm kick-off. Here’s all you need to know ahead of the match…

Forward Oli Sarkic will miss the game with a hamstring injury.

Long-term absentee Joe Riley will also be absent, as he continues his recovery from an ACL injury.

Newport will be without on-loan Mansfield forward Nicky Maynard, who is not eligible to feature against his parent club.

The Exiles are boosted by the availability of defender Mickey Demetriou, who returns from a one-match suspension.

The Stags earned a point and clean sheet away at play-off hopefuls Exeter City on Easter Monday, and will look to build on that result in Friday’s clash with Newport.

The Exiles sit seventh in Sky Bet League Two heading into their clash with the amber and blue, having amassed 60 points from 38 games.

Newport achieved victory against the in-form Bolton Wanderers in their last outing, with a 1-0 scoreline putting an end to three games without a win.

We last faced the Exiles in October 2020 at Rodney Parade, with the game ending 2-1 to the hosts.

Stephen McLaughlin was on the scoresheet for the Stags.

The referee for Friday’s game will be Christopher Pollard, assisted by Christopher Husband and Gareth Viccars. The fourth official will be Robert Lewis.

Mr. Pollard last took charge of a Mansfield fixture in our 2-1 defeat at home to Exeter City in September 2020.

Newport captain Joss Labadie scored the opening goal of the game, taking the ball off George Maris in midfield and firing a low shot under Aidan Stone in the Mansfield goal.

It didn’t take long for the Stags to pull level again as Sinclair fired a rocket of a shot into the roof of the net just five minutes later to secure a deserved point.

The Stags started as brightly as they did in Devon, registering a shot at goal within the first minutes. Tyrese Sinclair jumped highest to meet Quinn’s cross from the left side, but his close-range header was cleared off the line to deny the youngster his first Sky Bet League Two goal.

The Exiles were under siege in the opening five minutes as Mansfield went close again. This time it was Ryan Sweeney who got a solid left-footed connection on Quinn’s cut back but couldn’t keep his effort down and Newport survived the early scare.

The game’s fast pace dropped drastically until the next chance which came in the 13th minute from Joe Ledley’s flick-on which caused some issues in the Stags’ penalty area before being hacked clear.

Newport had their first dangerous chance just before the half-hour mark as the former Premier League player Ledley bundled into Josh Sheehan’s cross, fortunately missing the target from close range.

The visitors enjoyed a ten-minute period of dominance at this point, having their next dangerous chance moments later when Dom Telford fired a fierce shot that forced Stone into a smart save down to his right.

The Stags edged back into the match after this. Quinn continued to cause problems on the left-hand side and went for goal himself with five first-half minutes left to play, cutting in and curling a low effort inches wide of Nick Townsend’s far post.

The opening ten minutes of the second half passed with little incident until Sheehan whipped in a free-kick from the left-hand side, calling Stone into a decisive punch to clear the danger.

Moments later, Quinn created the second-half’s best chance as he weaved into the Exiles’ penalty area and put in a low shot from a tight angle, hitting the inside of the far post before the visitors hastily swept the ball away.

The man on loan from Burton was involved again the next time Mansfield went forward, hitting a first-time shot at Nick Townsend in the Newport net, who did well to hold the powerful, right-footed effort.

Despite Quinn’s continued creative endeavour, it was the visitors who took the lead. George Maris was dispossessed by Labadie halfway inside the Mansfield half before the Exiles' captain fired a low shot from 18 yards which went under Stone and into the net.

The lead didn’t last long however as Sinclair fired in his first goal for the club. The 20-year-old robbed Liam Shephard on the left-hand side of his own penalty box, shifted the ball onto his right foot and rocketed his shot into the roof of Townsend’s net, leaving the ‘keeper with no chance.

High on confidence, Sinclair was quick to assert his authority on a free-kick won by George Lapslie but couldn’t get his effort from 25 yards down quick enough.

Jamie Reid had the Stags’ final chance in extra time, but his audacious volley was blocked as County held out for a point.

Stags’ attention now turns to Stevenage away next Saturday. 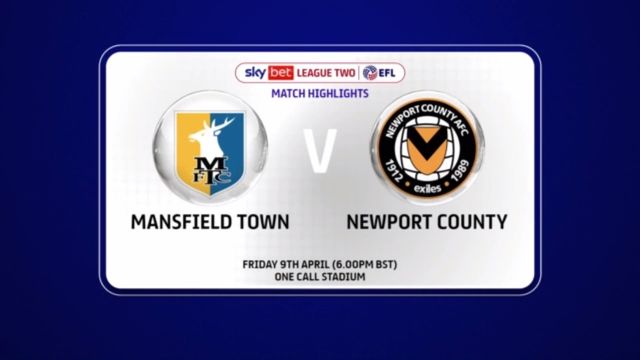 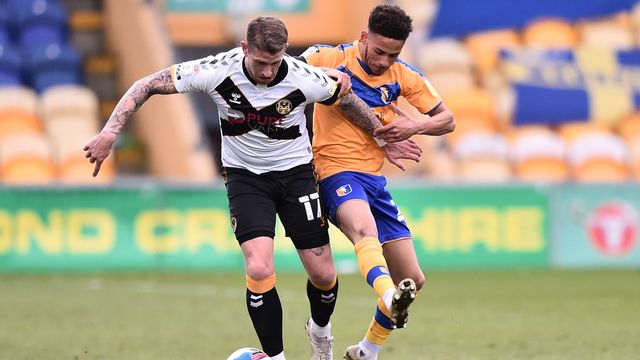