Mansfield Town earned a point and clean sheet away at Exeter City on Bank Holiday Monday.

The game was devoid of chances, but the Stags had the better of their play-off chasing opposition on the day, coming closest through captain Ollie Clarke who saw his first-half shot deflect just past the far post.

The hosts’ best chance came just before the end of the first period when Jack Sparkes headed towards the bottom corner, forcing Aidan Stone into a smart save.

Stags' boss Nigel Clough has made four changes to the side that faced Leyton Orient for Monday's clash against Exeter City.

Clarke started in midfield, replacing Jason Law, and Tyrese Sinclair was given the nod over Jamie Reid, who started on the bench.

The game posed huge importance to both sides who were looking to rise from their Good Friday results and turn their poor runs of form.

It was the Stags who started brightest as the sun shone down on St. James Park; George Lapslie did well to wrap his foot around the ball and volley Stephen Quinn’s cross goalward in the second minute but couldn’t quite keep his effort on target as it bounced just wide of the mark.

In contrast, Exeter struggled to create much in the opening exchanges, their best chance coming courtesy of Sparkes who put a little too much behind his cross to Ryan Bowman, which Stone collected neatly.

The next ten minutes passed with little incident, however, Mansfield seemed to have control as the hosts committed an extraordinary string of unforced errors, losing possession six times in quick succession.

With 21 minutes played the Stags found themselves in another dangerous position as Clarke fired goalward from close range only for his shot to be deflected wide of the far post by the sliding Josh Key.

Mansfield continued to get the better of the home side as McLaughlin fired goalward from 12 yards and left of centre, forcing Icelandic goalkeeper Jokull Andresson into his first save of the afternoon and thus denying McLaughlin his fourth goal of the season in the process.

With seconds of the first 45 minutes left to play, Exeter mustered their first shot on target. Sparkes met Jake Taylor’s cross at the back post, heading low and forcing Stone to get down quickly and palm the ball away.

The home side’s unforced errors continued into the second-half as Lewis Page, the last man, under-hit his back pass to Andresson and compensated for his error by dragged down Quinn in desperation, picking up a yellow card when the colour could have different.

The chances were few and far between in the second period. Just after the hour mark, Sinclair went down in the penalty area, an event that received strong calls from the Mansfield players and staff, but referee Carl Brook was unmoved.

Exeter’s first shot of the second-half came from the ever-dangerous Randell Williams who cut in from the right-hand side and kept running across the face of goal before eventually firing his shot into the lunging James Perch.

The game began to liven up as just four minutes later, the Stags had a good chance; the ball broke for Sinclair in the City box at a tight angle and the youngster, making his first league start for Mansfield, shot powerfully at the 6’3 figure of Andresson who kept his clean sheet.

With ten second-half minutes to play, Sinclair went down in the box again and the Stags’ shouts were matched by the Grecians' groans, until the man in the middle awarded a free-kick to the home side and booked Sinclair for simulation.

Aside from a few late Mansfield corners, this proved to be the last action of the game as the Stags claimed a well-deserved point. Attention now turns to Friday night when they host Newport County. 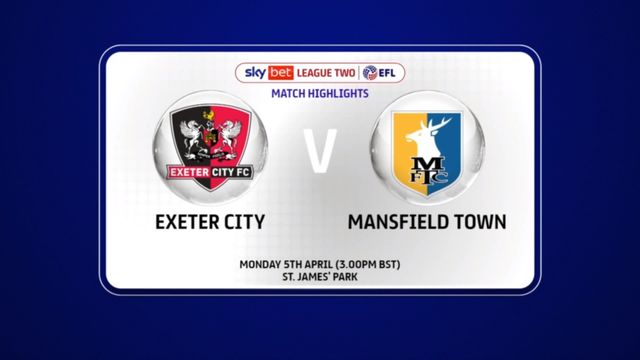 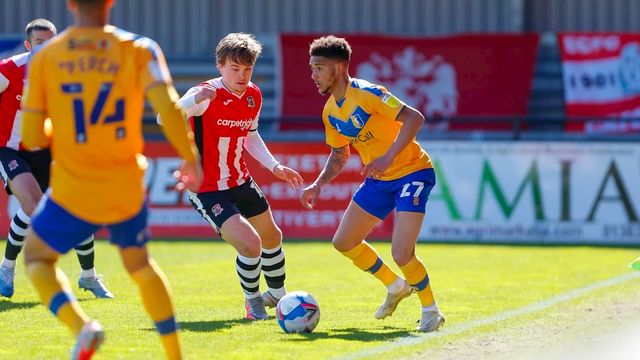